BLYTH, England — Britain’s economic and political ties to Europe may be fraying, but a growing web of undersea electrical cables binds the nation’s vital power system and its clean energy aspirations to the continent.

The longest and most powerful of these cables was recently laid across the North Sea, from a hydroelectric plant in Norway’s rugged mountains to Blyth, an industrial port in northeast England. Completed last year, it stretches 450 miles, roughly the distance from New York to Toronto. The twin cables, each about five inches in diameter, can carry enough power for nearly 1.5 million homes.

The idea is to use the cable to balance the two nations’ power systems and take advantage of differences between them. In the broadest terms, Britain wants to tap into Norway’s often abundant hydropower, while the Norwegians will be able to benefit from surges of electricity from British wind farms that might otherwise be wasted.

The rapid growth of renewable energy sources like wind and solar, whose output varies with the breeze and sunshine, makes such sharing increasingly essential, experts say. These cables connecting one nation’s grid to another, known as interconnectors, allow Europe and other regions to operate like a much larger and more diverse power system that can use surpluses of electricity in one area to offset shortages in others. 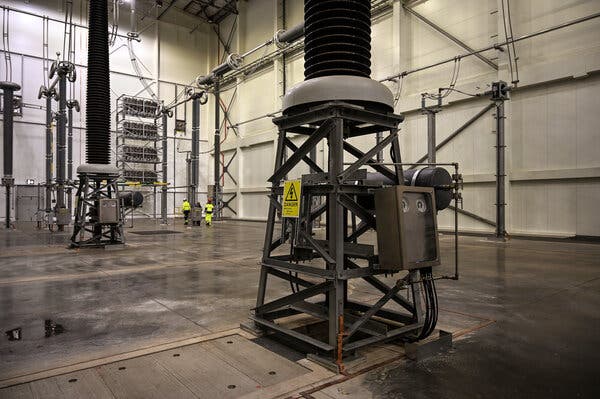 At Blyth, a cable runs underground and out into the North Sea.Credit…Mary Turner for The New York Times

Connected cables mean Europe and other regions can have a larger, more diverse energy system. Surpluses of electricity in one area can offset shortages in others.Credit…Mary Turner for The New York Times

“Interconnectors across borders on a continent like Europe are a prerequisite” to enable societies to run on renewable energy, said Hilde Tonne, the chief executive of Statnett, the Norwegian electric grid operator that is a half-owner of the cable, along with Britain’s National Grid.

The ability to share electric power, to import or export it as needed, she added, is crucial to “moving from fossil fuels to an energy mix that is more and more weather based.”

In the coming decades, the effort to tackle climate change will require increasing demands for electricity, not only for battery-operated passenger cars but for heating, industry and other sectors. Experts like Ms. Tonne say it is cheaper and more efficient for European countries to lay cables to make use of each other’s particular energy strengths than to try to do it all on their own. Norway is already wired to neighbors like Sweden and Denmark, and recently built a line to Germany.

Norway’s power needs are usually largely met by a network of hydroelectric plants, but output can slacken when reservoirs run low.

“If we wouldn’t have the ability to import in dry weather and export in wet weather, we would lose a lot of money,” Ms. Tonne said.

“Interconnectors across borders on a continent like Europe are a prerequisite” to enable societies to run on renewable energy, said Hilde Tonne, Statnett’s chief executive. Credit…Thomas Ekström for The New York Times

The shift to renewables can be turbulent. This fall and winter, consumers in Britain and throughout the continent have been exposed to soaring prices for electricity when the breezes that generate wind power were unusually still and natural gas prices spiked.

Still, the pace of interconnection is accelerating for Britain, whose ambitions to achieve net zero carbon emissions by 2050 depend to a great extent on renewable energy, notably turbines spinning off the nation’s coasts. Having left the European Union about two years ago, Britain is also betting big on clean energy and green industry to help secure its economic future.

Those aspirations to be a Saudi Arabia of wind, as Prime Minister Boris Johnson has put it, rely to a substantial extent on an expanding network of electric arteries. Britain’s interconnector arsenal is growing rapidly and now has the capacity to provide nearly a quarter of average electricity demand.

Besides the cable to Norway, National Grid manages undersea links to France, Belgium and the Netherlands. A 2 billion pound ($2.7 billion) interconnector to Denmark is under construction, in partnership with the grid operator there.

“Interconnectors are a really critical tool to enable countries to decarbonize their energy systems,” said Cordi O’Hara, president of National Grid Ventures, the unit that built the Norway link with Statnett for 1.6 billion euros ($1.8 billion). “When the wind doesn’t blow or the sun doesn’t shine in a region, they can get access to renewable resources from other places,” she added.

Britain and countries like Denmark and the Netherlands are developing grand plans to transform the North Sea, long an oil and gas hub, into one of the world’s great generators of renewable energy. The British government, for instance, aims to nearly quadruple Britain’s already world-leading offshore wind capacity over the next decade.

“We see the North Sea as this green powerhouse for electricity,” Ms. O’Hara said.

Among the possibilities: cables that would tap into some of the enormous offshore wind farms likely to be built in the coming years, sending that power to multiple countries, and artificial energy islands that might have not only wind turbines but other clean energy facilities like hydrogen generators.

For undersea cables, “there is no limitation when it comes to length,” said Bjorn Sanden, a technical director at Nexans, a Norwegian company responsible for a large portion of the cabling on the link between Britain and Norway. Projects under discussion, like a 2,600-mile undersea link that would take solar power from Australia to Singapore, are theoretically feasible, if the economics can be made to work, he said.

Britain’s plans for the North Sea could be made more complex by the country’s uneasy ties with its former European partners. It has been excluded from a European power pricing system, making its interconnectors more cumbersome to use, said Chris Matson, a partner at LCP, a consulting firm. In October, France’s Europe minister, Clément Beaune, even suggested that Europe might cut off energy supplies to Britain during a dispute over fishing rights.

Being outside the European market “does create some more political risk around your energy supply,” Mr. Matson said.

Also, coastal communities have raised objections to the electrical equipment necessary at both ends of cables. To avoid large losses of power over long distances, the electricity must be converted from alternating current to direct current, and then back again at the other end. At Blyth, large gray buildings housing these converter facilities and other electrical equipment cover a 12-acre site.

Last summer, there was a protest in Portsmouth in southern England over the potential disruption from an England-France interconnector proposed by a company called Aquind.

If Britain does move much of its electrical system offshore, power could be brought to land at a few carefully chosen sites rather than at many locations, as has occurred.

“The coastal communities are asking the U.K. to be more efficient,” Ms. O’Hara said.

These facilities, handling enormous amounts of energy, may make neighbors uneasy. In September, a fire at a National Grid installation on Britain’s south coast where a cable comes in from France knocked out an interconnector and rattled markets. As many as 12 fire engines responded to the blaze, which had apparently been triggered by equipment failure, and power through that conduit is not scheduled to be fully restored for another year.

When they function well, the interconnectors help smooth markets, allowing the side with the more expensive electricity to buy cheaper power from the other side. While the flows last year were mostly from Norway to Britain, the direction can switch one or more times in a day, sending power to whichever market has the higher prices. The operators essentially make money on the differences in pricing between the two systems, a lucrative business in 2021, when power prices were high and volatile.

Mr. Matson estimates that Britain’s interconnectors earned £1.2 billion in revenues in 2021. That amount would be split with partners like Statnett. The National Grid interconnectors are regulated by a system that guarantees the company a minimum return on its investment but caps profits.

Work on the link to Norway began before Britain decided to leave the European Union. Although Norway is not a member of the bloc, it cooperates closely with it.

Ms. Tonne of Statnett said Britain’s being outside the European regulatory system had “proven a challenge with respect to having to find new ways of doing things.” She is hopeful that redeveloping the North Sea for green energy could help overcome the bitterness of Brexit.

“There will have to be a collaboration,” she said.

Tags
Europe Li̇ke Other Power That

Changing Brussels Neighborhood Tries to Leave Stigma of Terrorism Behind