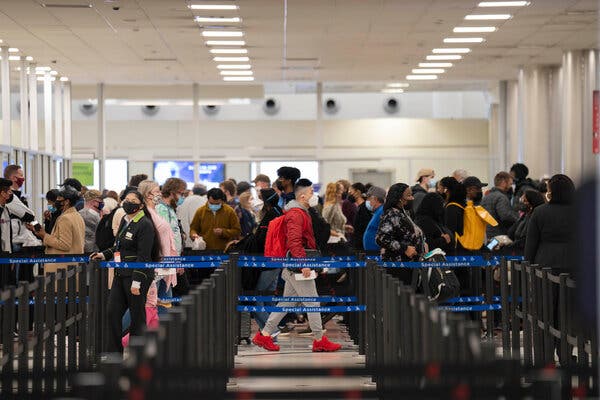 Travelers at U.S. airports were forced to wait hours in long lines.Credit…Nicole Craine for The New York Times

Officials across the U.S., from President Biden on down, have been insisting that they are no longer in the shutdown business and will not order any closures to contain the latest surge in coronavirus cases.

But Omicron is complicating that decision: So many workers are testing positive that businesses, schools, government agencies and more are being crippled by staff shortages that are forcing them to close some operations anyway.

The country’s seven-day average of new daily cases is now over 400,000, triple that of two weeks ago.

Airlines canceled thousands of flights over the past few weeks for lack of crews. Plays have been closed because of employee outbreaks. Companies intent on returning to office have scrapped or reconfigured their plans. Universities and public schools put off returning to classrooms or implemented remote instruction.

The staff shortages are reaching every corner of society. Police officers and paramedics have had to stay home, leaving New York City to ask residents not to call 911 except in absolute emergencies. All this comes as the Centers for Disease Control and Prevention cut in half the isolation period for people with Covid-19, to five days.

And hospitals can barely keep up. One in four American hospitals with intensive care units report that they are at or near capacity, according to a Times tracker.

Global picture: The world is recording an average of nearly 1.5 million new cases every day, twice as many per day as were recorded nearly a week ago

In other pandemic developments:

What the E.U. could do about Orban

After long indulging him, E.U. leaders now widely consider Prime Minister Viktor Orban of Hungary an existential threat to a bloc that holds itself up as a model of human rights and the rule of law.

The bloc is trying to rein him in as he tries to consolidate power, and it could exercise a new level of interference in member states’ affairs. This year, the European Court of Justice will issue a decision on whether the bloc has the authority to make funds to member states conditional on meeting its core values. Doing so may block countries that violate those values from billions of euros.

Interviews with current and former European officials show how sentiments toward Orban have evolved from indulgence to recognition that he has become a serious internal threat, and why many officials were slow to act.

Quotable: A former European Council aide said that the council was “like a club, where Viktor is just one of them.” He added that the leaders “prefer not to deal with hot potatoes or each other’s business when they can avoid it.”

U.S. ally: Former President Donald Trump endorsed Orban for re-election. Orban was an early supporter of Trump, endorsing him in the summer of 2016 and again in 2020.

Sudan braces for ‘the worst’

Sudan’s military and security forces are fully in control again, following the departure of the civilian prime minister, Abdalla Hamdok, on Sunday.

Confrontations between protesters and security forces have gripped the capital, Khartoum, and beyond in recent weeks, and there are fears of an escalation. At least 57 people have died, a doctors’ group said. Sudan’s military leader promised to form “an independent government,” but experts say that won’t be easy without the political structures or independent bodies in place to legitimately appoint a new prime minister.

In the months after Hamdok’s transitional government took power, it signed a peace deal with rebel groups, outlawed female genital mutilation and was taken off a U.S. list of state sponsors of terrorism. Those changes, with Hamdok as prime minister, gave hope to many Sudanese that their nation was taking a turn for the better.

Details: Hamdok took office in 2019 in part of a power-sharing deal negotiated between civilian and military forces after widespread protests ousted the country’s longtime dictator, Omar Hassan al-Bashir. The military removed Hamdok from office on Oct. 25, then reinstalled him a month later after he signed a deal with them. Protesters and political parties denounced the deal.

Quotable: “It is very clear that the military and its alliance won’t hand over power peacefully, so they will try to crush the peaceful resistance,” said Dr. Sara Abdelgalil, a former president of the doctors’ group. “We are expecting the worst.”

Every year, thousands of people gather at a temple complex in Kathmandu, Nepal’s capital, in honor of Shiva, one of Hinduism’s most revered gods. Here’s a visual exploration.

Lives Lived: Richard Leakey, a Kenyan paleoanthropologist and fossil hunter whose discoveries helped cement Africa’s place as the cradle of humanity, died at 77.

Hades is the first video game to win a Hugo Award, the prize for science fiction and fantasy that has historically honored books, graphic novels and other written works.

The game, from the developer Supergiant Games, follows the story of Zagreus — son of the game’s eponymous god — as he tries to escape the underworld. Along the way, he fights all sorts of hellish creatures and meets a wide array of characters, including the gods up on Olympus. He also uncovers family secrets and gains perspective on why his dad made seemingly unsavory decisions.

The Hugo Awards’ inclusion of video games, which organizers are considering making permanent, speaks to how far the medium has come. In the early days of Pong in the 1970s, or the original Super Mario Bros. and The Legend of Zelda in the 1980s, technology limited how much text a game could include. Today, a game’s storytelling can be its primary selling point, whether it’s a high-budget science-fiction epic, like the Mass Effect trilogy, or an indie game made by a small team, like Celeste.

For more to play, here are the video games that got our colleagues through 2021.

These chicken wings come out of the oven as crisp as their fried counterparts.

A New Year’s resolution you can keep: Stop dieting and start savoring your food instead.

Sixteen notable books coming out this month, including new works by Carl Bernstein and Hanya Yanagihara.

Here’s today’s Mini Crossword, and a clue: Largest animal ever to exist on earth (five letters).

That’s it for today’s briefing. Thanks for joining me. — Melina

P.S. David Fahrenthold, who won a Pulitzer Prize in 2017 while reporting for The Washington Post, is joining The Times’s Washington bureau as an investigative reporter.

The latest episode of “The Daily” is about how the Omicron variant is counterintuitive.

German Lopez wrote the Arts and Ideas section. You can reach the team at briefing@nytimes.com.

Tags
Can Game New Off That

From Flight Attendant to Funeral Planner: New Beginnings in the Covid Era