This has been a month of sad remembrances — the 20th anniversary of Sept. 11, of course, and the anniversary last Saturdayof the death of Justice Ruth Bader Ginsburg. An additional, less noted anniversary is an occasion not for sorrow but for wonder. Forty years ago this Saturday, on Sept. 25, 1981, Sandra Day O’Connor took her seat on the Supreme Court.

I use the word “wonder” because of how what once seemed remarkable is today a commonplace; of the 12 justices to join the court in the ensuing decades, four have been women, including three of the last five. Most people in the United States today were not yet born on that early fall afternoon when Sandra O’Connor took the oath of office and ended 191 years of an all-male Supreme Court.

The overflowing audience included President Ronald Reagan, whose nomination of a little-known judge on Arizona’s intermediate appellate court fulfilled a campaign promise — regarded by some as impetuous — to name the first woman to the court. For those of us who were old enough in 1981 to recognize the significance of the breakthrough, the sight of Justice O’Connor on a bench that included aging nominees of Presidents John F. Kennedy and Lyndon Johnson was electrifying.

The history of her appointment is not the only reason to think today about Sandra O’Connor, who retired 15 years ago and is now, at 91, living with dementia. At a time when the Supreme Court’s behavior seems to embody and even to amplify the country’s polarization, it’s worth reflecting on the path she took during her quarter-century on the court.

A former majority leader of the Arizona Senate, she had spent years in Republican politics. She was close to Senator Barry Goldwater, a former neighbor in Phoenix, and had served as an Arizona co-chairwoman of Richard Nixon’s re-election campaign in 1972. Her early years on the court appeared to bear out the promise conveyed by her political credentials.

She voted with the court’s most conservative member, her fellow Stanford Law School graduate (and, we learned from Evan Thomas’s 2019 biography, “First,” a onetime boyfriend) William Rehnquist, in opposing affirmative action, curbing state prison inmates’ access to federal court, and bolstering the authority of the states vis-à-vis the federal government. At a time when the justices’ support for the right to abortion remained robust, she was harsh in her criticism of Roe v. Wade.

Over time, she largely lost the label “conservative” and became known as a “moderate.” That overused, context-dependent word has little independent meaning. What interests me is less where she stood on the court’s political spectrum than how she got there. The answer, of particular relevance today, is twofold. One, she cared about the impact of the court’s decisions — not only on the law, but on the country itself. And two, she was willing to learn.

On abortion, for example, she framed her critique of Roe v. Wade in a dissenting opinion in 1983 around the prediction that the date of fetal viability — the date before which the court had recognized a woman’s absolute right to terminate a pregnancy — was inevitably moving backward toward early pregnancy. “The Roe framework,” she wrote “is clearly on a collision course with itself.”

Six years later, when the next major abortion case reached the court, medical organizations pointedly filed briefs describing fetal development and explaining why the date of viability was unlikely to change significantly for the foreseeable future.

In that case, Webster v. Reproductive Health Services, four justices took a position that as a practical matter would have overturned Roe. Justice O’Connor refused to join them. “There will be time enough to re-examine Roe,” she wrote. “And to do so carefully.” Three years later, when that moment arrived, she provided a crucial vote to uphold the right to abortion in Planned Parenthood v. Casey, a decision that has stood as binding precedent for 29 years.

A turning point came for Justice O’Connor in 2003, at the end of a remarkable term during which the court afforded constitutional recognition to same-sex relationships and upheld a race-conscious admissions plan at the University of Michigan Law School. She was in the majority in both cases.

In the first decision, Lawrence v. Texas, she was the only one of the six justices in the majority who 17 years earlier, in Bowers v. Hardwick had voted the other way and declined to recognize constitutional protection for the private relationships of L.G.B.T.Q. people. In other words, she was the only one who had to change her mind, although her separate opinion did not quite acknowledge that fact.

Noting that the Texas criminal sodomy law at issue was “directed toward gay persons as a class,” she wrote in a separate concurring opinion that “moral disapproval of a group cannot be a legitimate governmental interest under the Equal Protection Clause.”

Her majority opinion in the Michigan law school case, Grutter v. Bollinger, took explicit notice of briefs filed on the school’s behalf by corporate executives and former high-ranking military officers. The briefs argued that affirmative action in higher education was necessary to enable members of minority groups to get the qualifications needed to achieve success in American society. Justice O’Connor embraced the argument. “Effective participation by members of all racial and ethnic groups in the civic life of our nation is essential if the dream of one nation, indivisible, is to be realized,” she wrote.

Her learning came not only from briefs. Following Justice Thurgood Marshall’s retirement in 1991, she published an essay in The Stanford Law Review that offered a singular and deeply personal appreciation of the colleague with whom she had served for 10 years. Justice Marshall “imparted not only his legal acumen but also his life experiences,” she wrote, “constantly pushing and prodding us to respond not only to the persuasiveness of legal arguments but also to the power of moral truth.” His departure left her “hoping to hear, just once more another story that would, by and by, perhaps change the way I see the world.”

Over time, her closest colleague on the court became Justice Stephen Breyer. From the outside, it seemed an unlikely pairing, two people from opposing political parties with such different backgrounds, public personas and career paths. But they shared a deep concern about the practical effect of the court’s decisions. One of her last opinions, issued at the end of the term in June 2005, was emblematic. She provided a fifth vote to her more consistently liberal colleagues to declare unconstitutional a politically charged Ten Commandments display in a Kentucky courthouse.

“At a time when we see around the world the violent consequences of the assumption of religious authority by government, Americans may count themselves fortunate,” she wrote in her separate concurring opinion in McCreary County v. American Civil Liberties Union She continued, “Those who would renegotiate the boundaries between church and state must therefore answer a difficult question: Why would we trade a system that has served us so well for one that has served others so poorly?”

In that case and in many others during the second half of her tenure, Justice O’Connor held the balance of power on what some called the O’Connor court. The court lurched quickly to the right with the arrival of her successor, Samuel Alito. Today’s court would hardly be recognizable to the justices whose company Sandra O’Connor joined in 1981.

This anniversary is an occasion to reflect not only on what happened 40 years ago, but on what has happened in the intervening decades to bring us to a moment when legal abortion could be driven out of the second most populous state in the country without the Supreme Court lifting a finger.

After Justice O’Connor’s retirement from the court and mine from the Supreme Court beat at The Times, we saw one another with some regularity. We met not really as friends, but rather as veterans of decades of common experiences, albeit she as participant and I as observer. The night before Election Day in 2008, we shared the stage at an event where I had been invited to be her conversation partner. Before the proceedings began, I mentioned that I had taken training to be an election judge at the polls and she told me she had sent her absentee ballot to Arizona, her official home in retirement. I was intensely curious to know whether she had voted for Barack Obama or the Republican nominee, her state’s senator, John McCain.

Of course, there was no way I could ask the question directly, so I tried an oblique approach. “I guess you know Senator McCain pretty well,” I ventured. Her response was instantaneous and almost fierce. “I do not,” she declared. “I’ve met him, but I don’t know him. He’s a newcomer to Arizona.” (Unlike Barry Goldwater, born in the Arizona Territory before statehood, John McCain had moved to Arizona following his discharge from the Navy in 1981.)

No one who had just voted for a man for president would describe him in such deflating terms. As she surely intended, without acknowledging my unasked question, she had told me exactly what I wanted to know.

Forty years ago, it was Sandra O’Connor who was a newcomer. Then, for a time, she made the Supreme Court her own. If we can’t recapture that time, at least, on this anniversary, we can remember it.

For a Parent This Anxious Delta Fall, the Only Way Out Is Through

Americans Are Losing Their Right to Not Conform

Inflation Should Make Us All Vegetarians 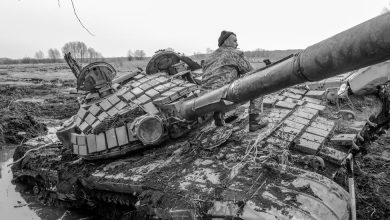 Why We Can’t Quit Muhammad Ali