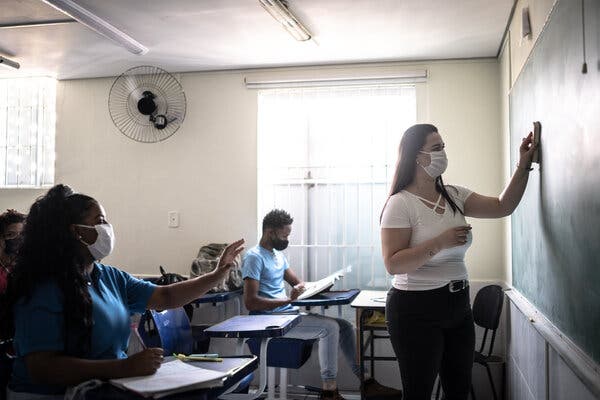 Re “Do Not Close the Schools Again” (Opinion guest essay, Dec. 22):

Dr. Joseph G. Allen’s essaydoes not acknowledge a painful reality that will make it nearly impossible for many schools to keep their doors open during an Omicron surge: We don’t have enough subs. When teachers inevitably become infected, who will teach during their absences? The substitute teacher shortage already has teachers scrambling to cover for their colleagues when those colleagues or their children have to quarantine. Teachers often have no prep time because they are covering unfilled vacancies.

As educators, we understand the impact that time away from school has on our students’ academic growth and on their mental and physical health. We have spent much of the last year trying to repair that damage. Dr. Allen’s adage “Schools should never close” would be true in an ideal world.

But the sad truth is that if we don’t have enough teachers to teach, our schools will be forced to move to a virtual format. I hope that if and when that happens, society doesn’t blame the schools. No one wants schools to close, especially the educators.

Kerry Burke
Madison, Wis.
The writer is a school counselor.

I agree with Joseph Allen about the harm to children from closing schools and the critical need for creative strategies to keep children in school and safe during the pandemic. His focus on healthy buildings — using ventilation techniques, facility redesign and air filtration systems to reduce spread of microorganisms — exemplifies such an innovative approach.

As a pediatrician, my focus is on healthy childrenand healthy families. I am sensitive to the intergenerational trauma experienced by the estimated 175,000 children who have been orphaned or have lost a primary caregiver from Covid, and I’m aware that children who contract Covid at school may transmit it to parents, grandparents and others at risk.

Since one of the most effective mitigation strategies to date is masking, I was therefore surprised by Dr. Allen’s recommendation of voluntary masking in schools. I have not seen any study demonstrating adverse effects of masking on the quality of children’s educational experience.

Moreover, the test-to-stay policies that Dr. Allen supports work only in the setting of masking. Why not bring all effective strategies to bear to keep children learning and safe in school: masking, test to stay, building improvements and, most of all, just as Dr. Allen said, vaccination!

Deborah Moss
Pittsburgh
The writer is a professor of pediatrics at the University of Pittsburgh and immediate past president of the Pennsylvania Chapter of the American Academy of Pediatrics.

We all know that keeping schools open is essential to academic and social growth for children. However, in inner-city public schools protocols are not in place to keep students and staff safe from Covid.

In New York City elementary schools many of the students remain unvaccinated. Schools are overcrowded, so keeping socially distant is impossible. The infrastructure is archaic, with poor airflow, and often classrooms aren’t cleaned. Random testing is done only with parents’ consent, so many kids just never get tested.

We are in the middle of a public health crisis and our schools should stay open, but only if health protocols are met. So, Dr. Allen, I invite you to come to my classroom, sit next to the unvaccinated students who can’t keep their masks on, and join them as they eat breakfast and lunch at their desks. And perhaps you should get tested after your visit.

The Growing Threat of Nuclear Extinction

We commend the nearly 700 scientists and engineers whose open letter to President Biden raises to public attention the crucial issue of the administration’s coming Nuclear Posture Review. The world’s nuclear weapons truly threaten the very existence of humanity but are much too much an invisible issue.

As good as the letter is, though, it does not go far enough in what it asks the president to do. In early 2017 Joe Biden, then the vice president speaking on behalf of the Obama administration, gave a policy address on nuclear weapons in which he said, “If we want a world without nuclear weapons — the United States must take the initiative to lead us there.” He added that “as the only nation to have used nuclear weapons, we bear a great moral responsibility to lead the charge.”

Since then the nuclear extinction threat has grown more dire; the Bulletin of the Atomic Scientists has put the nuclear doomsday clock back to 100 seconds to midnight, as close as it was at the height of the Cold War. President Biden must lead the charge as he proposed: initiate negotiations among the nine nuclear weapons nations to concurrently eliminate all their nuclear weapons within the decade under perpetual, enforceable, comprehensive verification protocols.

It will take a monumental diplomatic effort, but we can do it. We must do it.

Peter Metz
Ira Helfand
Mr. Metz, an engineer, is a member of the Massachusetts Peace Action Nuclear Disarmament Working Group. Dr. Helfand is the immediate past co-president of International Physicians for the Prevention of Nuclear War.

The best protection we have for capitalism and liberty in America is a free press. Over the last decade, avaricious businesspeople and investment bankers have taken advantage of the dated business model of U.S. newspapers, buying them up and draining their equity to invest in other ventures.

Ms. Ressa and Mr. Thompson caution us that independent journalism is on the brink of extinction, which threatens our freedom to express ideas without reprisal and our ability to stop the growing trend globally toward authoritarianism.

Visionary leadership is needed among the best, brightest and wealthiest in our community to form coalitions of influence to save independent journalism. Ms. Ressa and Mr. Thompson rightly lobby for their international fund to support public interest media globally. Another step here at home is financially supporting a business model of newspapers as a nonprofit corporation, immune to poachers in capital markets and with missions defined by the public interest.

With so many crises facing us in the world today, consider if any of these threats will ever be understood or resolved without journalists ferreting out facts. A free press is our best road map to truth — and a shared future. It’s time to heed the warning and act.

Stuart Z. Goldstein
Monroe Township, N.J.
The writer had a career in corporate communications for the financial industry.

Meredith Willson’s Efforts to Be Inclusive

I read with interest about Meredith Willson’s attempts to write a disabled character into his classic musical. This was not the first time he reached for inclusive representation.

According to my research, NBC celebrated the opening of its headquarters at Rockefeller Center in 1935 with a live radio show. It featured congratulations aired from NBC stations around the country. Mr. Willson, then program director at the San Francisco affiliate, KPO, tapped Etta Moten, the Black actor and singer who had recently appeared in the movies “Gold Diggers of 1933” and “Flying Down to Rio,” to read KPO’s message. Hers was the only woman’s voice — and perhaps the only Black voice — broadcast during the festivities. When Ms. Moten commended him for his farsightedness, Mr. Willson insisted he had simply chosen the best person for the job.

It was a gesture Ms. Moten never forgot. Twenty-one years later, though still a few years before Mr. Willson enjoyed his “Music Man” fame, she devoted an episode of her Chicago radio show to him, placing him in her personal “Hall of Fame” alongside the likes of Sojourner Truth, James Weldon Johnson and Leontyne Price.

Katherine Karlin
Manhattan, Kan.
The writer, an associate professor of English at Kansas State University, is working on a book on Etta Moten.

Tags
Children Keep Only President That

Emily Ratajkowski Doesn’t Want You to Look Away

Biden Says His Infrastructure Law Is a ‘Big Deal.’ How Big?