This article is part of the Debatable newsletter. You can sign up here to receive it on Wednesdays.

It is one of the most enduring trends in American politics that the president’s party tends to fare poorly during midterm elections. And in 2022, that trend was supposed to reassert itself with a vengeance: As inflation climbs at its fastest pace in four decades, Joe Biden’s approval rating has plunged to the lowest of any elected president at this point in his presidency since the end of World War II, according to FiveThirtyEight.

But despite those grim conditions, the midterms could be surprisingly competitive: In a July poll conducted by The New York Times and Siena College, 41 percent of registered voters said they preferred Democrats to control Congress, compared with 40 percent who preferred Republicans.

Here’s what people are saying about the state of the races, whether Democrats stand a chance of keeping one or both of their majorities in Congress, and what could change the forecast between now and November.

Why the races look closer than expected

If the Times/Siena polling made one thing clear, it’s that voters are not pleased with the way the country is being run. Even as the unemployment rate hovers around a 50-year low, Americans are deeply anxious about the economy: Just 10 percent of registered voters rated it as “good” or “excellent.” More broadly, political malaise seems the order of the day: A majority of respondents said the nation was too divided to solve its challenges, and just 13 percent said the country was heading in the right direction.

But there are a few factors insulating Democrats from all this negative sentiment.

The odds: According to Nate Silver of FiveThirtyEight, Republicans have roughly the same chance of reclaiming a Senate majority as Democrats do of retaining theirs. In the House, though, Republicans are still heavily favored. Why? House candidates are both more numerous and more anonymous than Senate candidates, Silver explains, so voters’ feelings about the national political environment tend to be determinative.

As The Times’s David Leonhardt wrote this month, “If Democrats keep the Senate without the House, they still would not be able to pass legislation without Republican support.” But, he added: “Senate control nonetheless matters. It would allow President Biden to appoint judges, Cabinet secretaries and other top officials without any Republican support, because only the Senate needs to confirm nominees.”

Because the Supreme Court returned the power to regulate abortions to the states last month, abortion will be a live issue this midterm season in a way it hasn’t been for many decades. Five states will have ballot measures asking voters whether to amend their constitutions to either enshrine or proscribe the right to abortion. And in other states, the issue has raised the stakes in competitive races for the legislature and the governor’s mansion.

There are two ways abortion’s centrality could help Democrats in November, Ed Kilgore argues in New York magazine. “The first and most obvious is that it could keep in the Democratic ranks a significant number of suburban swing voters who voted for the Donkey Party in 2018 and 2020 but who might swing back to the G.O.P. without Trump totally dominating the landscape and with economic issues in the forefront,” he writes. “The second possible effect is to boost the turnout rates of certain pro-Democratic groups of voters who often skip non-presidential elections.”

Mainstream Democrats have historically treated abortion as a divisive issue best left on the periphery of their campaign strategy. (Biden himself did not utter the word “abortion” until more than a year into his presidency.) But this election season, some Democrats are actively campaigning on the issue, wagering that the Supreme Court’s abrogation of the constitutional right to abortion could prompt a backlash from voters. In Georgia, for example, Stacey Abrams, the state’s Democratic nominee for governor, has started making direct appeals to swing voters and portraying her opponent, the incumbent governor, Brian Kemp, as the mind behind one of the nation’s most extreme abortion laws, which bans abortion after the sixth week of pregnancy.

Similarly, Senator Maggie Hassan, a Democrat who is up for re-election in “notoriously swingy” New Hampshire, has leaned into the issue. “I will fight and never back down,” she said in a June television ad raising the possibility of a national abortion ban. “Protecting our personal freedoms isn’t just what’s right for New Hampshire. It’s what makes us New Hampshire.”

Whether this strategy will end up redounding to the Democrats’ benefit remains an open question. Since the court overruled Roe v. Wade, most polls have shown approximately a three-point shift in the Democrats’ direction on the generic ballot, which asks whether voters would prefer Democrats or Republicans to control Congress, compared with surveys by the same pollsters before the decision came down.

But some are skeptical that the shift will endure through November or prove significant enough to turn the electoral tide. “Does it have an effect? Absolutely,” Chuck Rocha, a Democratic strategist, told The Times. “Does it fundamentally change the landscape? No. Not in an off-year election, when your president’s approval rating is below 40 percent and gas is $5 a gallon.”

Inflation: According to the Times/Siena College poll, 78 percent of voters say inflation will be “extremely important” when they head to the polls. “It’s a very negative thing politically for the Democrats,” said Jason Furman, an economist at Harvard University and a former economic adviser for the Obama administration. “My guess is that the negative views about inflation are so deeply baked in that nothing can change in the next few months to change them.”

Unless, of course, they get worse: Republicans are seizing on fears of rising prices in campaign ads, which economists warn could push prices even higher by entrenching inflationary expectations.

A surprise announcement from Trump: “Should former President Trump decide, against the advice of nearly every Republican strategist alive, to announce his candidacy before the midterm elections in November, he might energize Democratic voters enough to minimize their losses at the margins,” Charlie Cook of the Cook Political Report writes. “I am not sure it would save one or both majorities, but it certainly has the potential to have a greater impact than abortion, guns, and Jan. 6 combined.”

Another polling failure: As this newsletter has explored, the polling profession has been in something of a state of crisis since the 2016 election. Pollsters are having a harder and harder time reaching working-class voters, who have been trending Republican, and so polls have routinely overestimated Democratic support. As Cohn writes, “It’s hard not to wonder whether the good news for Democrats might simply be a harbinger of yet another high-profile misfire.”

Do you have a point of view we missed? Email us at debatable@nytimes.com. Please note your name, age and location in your response, which may be included in the next newsletter.

“This election could answer the biggest midterm question: Abortion or the economy?” [Politico]

“Where the Midterms Could Most Affect Abortion Access” [FiveThirtyEight]

“Could the Midterms Be Tighter Than Expected?” [The New York Times]

“Sorry, Democrats. Don’t get your hopes up for the midterms.” [The Washington Post]

Chinese Stages Show of Force Near Taiwan for a Third Day

Moderates and Progressives, Get Together!

Jeff Zucker and the Reckoning Over Office Romances

Overdoses Have Skyrocketed During the Pandemic. How Do We Stop Them? 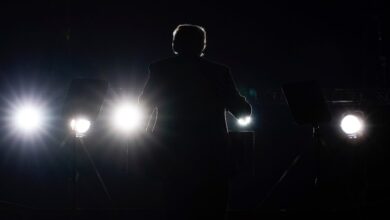 The Risks of the Trump Investigation