We’re covering the International Olympic Committee’s reluctance to challenge Beijing and a lockdown of the unvaccinated in the Philippines. 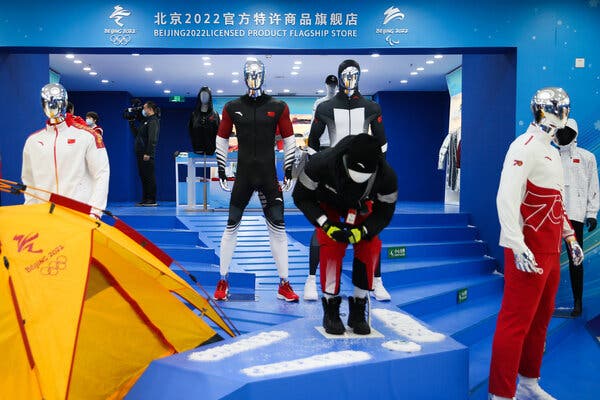 Official Olympic merchandise at a store in Beijing.Credit…Visual China Group, via Getty Images

With just one month before the start of the Winter Olympics in Beijing, concerns about China’s human rights record loom over the Games.

While activists and some world leaders have raised questions about China’s suppression of civil liberties in Xinjiang, Hong Kong and Tibet, the International Olympic Committee has remained tight-lipped. Instead, the I.O.C. has consistently deflected calls to exert more pressure on China — a lucrative market and an important financial and organizational partner for the Olympics.

For months, rights activists have asked the Olympic committee to ensure that Beijing 2022 merchandise had not been made under duress by Uyghurs in Xinjiang. So far, the I.O.C. has been reluctant to do so, according to correspondence between the I.O.C. and a rights group, which was reviewed by The Times.

Context: In years past, the I.O.C. had been willing to engage with human rights concerns elsewhere, including prodding the Russian government to investigate claims of unpaid wages in 2014. The committee defended its approach in China, arguing that sports are a tool to building a better world.

Related: Tesla came under fire from political leaders and human rights groups after announcing it would open a dealership in the Xinjiang region.

Classes have been suspended in Manila and the surrounding areas.Credit…Rolex Dela Pena/EPA, via Shutterstock

A lockdown for the unvaccinated in the Philippines

The Philippines will bar all unvaccinated residents from leaving their homes, except for essential reasons, in Manila and the surrounding areas. The lockdown is in response to a post-holiday spike in Covid-19 cases.

The lockdown is aimed at both lessening the country’s caseload and encouraging vaccinations. Health officials have suggested that vaccine complacency was behind the latest rise in infections.

“Despite the availability of vaccines, there is a number of individuals who adamantly opt not to be vaccinated,” the Metropolitan Manila Development Authority said in a statement.

What’s next: Officials say they hope to fully inoculate 77 million Filipinos out of a population of 110 million by May. As of early December, only 40 million have had at least two doses.

Xiomara Castro, who won the election in Honduras in November.Credit…Daniele Volpe for The New York Times

Leftists are on a winning streak in Latin America

First in Mexico, then in Bolivia, Peru, Honduras and Chile — and perhaps soon in Colombia and Brazil — leftist politicians have won presidencies, often defeating right-wing incumbents. This year, left and center-left leaders are expected to be in power in the six largest economies in the region.

The trend has not extended to El Salvador, Uruguay and Ecuador. But overall, Evan Ellis, a professor of Latin American studies, said that in his memory there had never been a Latin America “as dominated by a combination of leftists and anti-U.S. populist leaders.”

Yet these new leaders may find it hard to deliver on change. Unlike in the early 2000s, when leftists won critical presidencies in Latin America, the new officeholders are saddled by debt, lean budgets, scant access to credit and, in many cases, tough opposition.

Global effect: The left’s gains could buoy China and undermine the U.S. as they compete for regional influence, analysts say. The change could also make it more difficult for the Americans to continue isolating leftist regimes in Venezuela, Nicaragua and Cuba.

Next test: In Colombia, where a presidential election is set for May, Gustavo Petro, a leftist former mayor of Bogotá who once belonged to an urban guerrilla group, is leading in the polls.

Dozens of residents of the Molenbeek neighborhood of Brussels traveled to Syria and Iraq to fight alongside armed groups in the early 2010s.Credit…Virginie Nguyen for The New York Times

The Molenbeek neighborhood of Brussels was the breeding ground for a cell of terrorists that killed 162 people in Paris and Brussels in 2015 and 2016. Six years later, residents are trying to reinvent the community as a trial examines what went wrong in Molenbeek.

What Americans will eat

The Times’s Kim Severson rounded up forecasters’ predictions about what Americans will eat and drink in 2022. They’re expecting a new interest in mushrooms, a rethinking of chicken and coffee and a resurgence of 1980s cocktails.

As far as the flavor of the year goes, look out for hibiscus, “which is adding its crimson hue and tart, earthy flavor to everything from cocktails and sodas to crudos and yogurt,” Kim writes.

You may even start hearing entirely new words to describe tastes, like “swicy” and “swalty.” Check it all out here.

Coated in panko and sesame seeds, this tofu takes on a splendid crunchiness that contrasts with sautéed spinach.

“Dante: A Life” is an impressively researched new portrait by the Italian novelist and historian Alessandro Barbero.

“Three Minutes: A Lengthening,” a documentary based on a home movie, captures Jewish life in a Polish town before the Nazis arrived.

Here’s today’s Mini Crossword, and a clue: largest animal ever to exist on earth (five letters).

That’s it for today’s briefing. See you next time. — Matthew

The latest episode of “The Daily” is about flawed prenatal testing.

You can reach Matthew and the team at briefing@nytimes.com.

A Spanish Mystery: Is a ‘Masked Restorer’ to Blame for a Church’s Botched Repair?