We’re covering tests of Pfizer’s booster vaccine against the Omicron variant and a new chapter in Germany after 16 years under Angela Merkel. 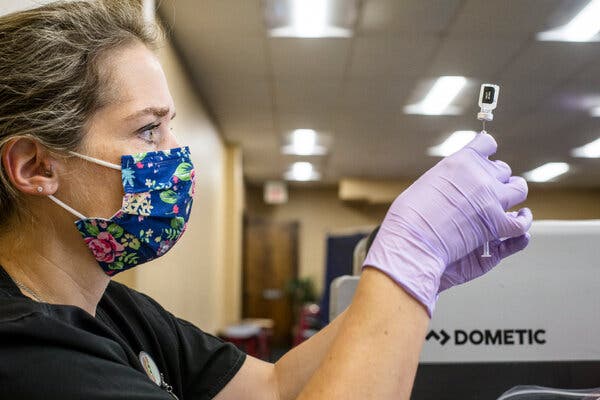 A vaccination clinic in San Antonio, Tex., in September.Credit…Matthew Busch for The New York Times

Pfizer and BioNTech said Wednesday that two doses of their Covid vaccine “may not be sufficient to protect against infection” by the new Omicron variant, but lab tests suggested that three doses offered significant protection.

The companies said that blood tests from people who received only two doses found much lower antibody levels against Omicron compared with an earlier version of the virus.

Blood samples obtained from people one month after a booster shot showed neutralizing antibodies against Omicron, comparable to the levels of antibodies against a previous version of the virus after two doses, the companies said.

Big takeaway: These experiments, done with blood samples in the lab, cannot determine for sure how the vaccines will perform in the real world. But the results seem to underscore the importance of booster shots.

What’s next: Pfizer’s chairman said the company started developing a version of its vaccine targeting Omicron last month, and that it could be produced within 95 days. Moderna is on a similar path.

A new era in Germany

Scholz will lead the first center-left government in 16 years and will be in the difficult spot of trying to live up to the high expectations set by Merkel.

Several crises demand his immediate attention, chief among them the coronavirus pandemic and a possible Russian military invasion of Ukraine. Scholz is also working to win back a working-class base.

End of an era: Under Merkel, Germany became Europe’s leading power for the first time in modern history. We looked at Merkel’s tenure in photos.

Swearing-in: Scholz omitted the “so help me God” of the traditional oath. The transition was harmonious, with kind words from Merkel and Scholz to each other. In her farewell remarks, Merkel called the chancellorship “one of the most beautiful duties there are.”

Firsts: Turkish people are Germany’s largest immigrant group. Germany elected its first Turkish-German minister. Also, Scholz’s incoming cabinet will have more women than ever before. Half, to be exact.

The Beijing Winter Olympics are set to start in February. Credit…Roman Pilipey/EPA, via Shutterstock

Britain, Australia and Canada were among the latest countries to join the U.S. in pulling their top officials from the 2022 Beijing Olympics. Their athletes will still be allowed to compete.

The move allows the countries to register their disapproval of China over its human rights abuses. The nations hope to send a message to China about the internment of Uyghur Muslims in Xinjiang and other issues of concern.

China’s response: The word “boycott” appeared to have been banned in online searches. A spokesman for the Chinese embassy said, “The Beijing Winter Olympics is a gathering of Olympic athletes and winter sports lovers across the world, not a tool of political manipulation for any country.”

Analysis: Our columnist writes that the diplomatic boycotts are a start, but they do not go far enough. Corporations sponsoring the events should also act, he writes.

Olympics viewing guide: Speedskating, curling and monobob: Here’s a look at every sport that will be contested at the 2022 Winter Games.

In May, a Ryanair plane was forced to land in Minsk, Belarus, and an activist on board was arrested.Credit…Andrius Sytas/Reuters

The idea that Yoko Ono doomed the Beatles has long been criticized. Amanda Hess, a critic at large for The Times, writes that in “The Beatles: Get Back,” a new eight-hour documentary, Ono’s presence is a sort of artistic performance in itself. “Ono simply never leaves,” Hess writes. “She refuses to decamp to the sidelines, but she also resists acting out stereotypes.”

Lives Lived: Hyun Sook Han was 12 when she fled her home during the Korean War. She dedicated her life to an adoption program for Korean orphans. Han died at 83.

Off the coast of Antarctica in waters recognized by cartographers in June as the Southern Ocean.Credit…Daniel Berehulak for The New York Times

We rounded up 21 things that happened for the first time this year — some are surprising trends, others are serious events. Here’s an excerpt, or see the full list.

2. A purely digital artwork sold at auction for millions.

3. A human brain was wirelessly connected to a computer via a transmitter device.

Endlessly adaptable, this is one version of aloo anday, a Pakistani dish of spicy scrambled eggs and potatoes.

Five minutes that will make you love the organ.

Here’s how to use your phone’s privacy protection tools.

P.S. The Times is debuting an iPhone audio app for podcasts and more.

The latest episode of “The Daily” is about Ukraine.

You can reach Melina and the team at [email protected].

The World Is Unprepared for the Next Pandemic, Report Says

In Egypt’s Big Ramadan TV Drama, the President Is the Hero 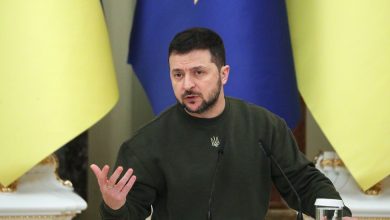 Zelensky vows action against corruption after a minister is fired for embezzlement.