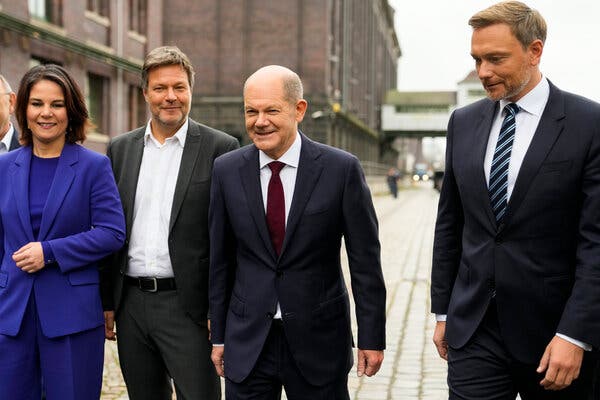 For the first time in 16 years, Germany will have a center-left government and a new chancellor as Olaf Scholz, a Social Democrat, replaces Angela Merkel, the center-right chancellor who made Germany indispensable in Europe and in the world. The new leader campaigned largely by convincing voters that he would be like his predecessor.

Scholz and his coalition partners from the progressive Greens and the pro-business Free Democrats yesterday announced a governing deal that they had been negotiating in secrecy since the Sept. 26 election.

Scholz is expected to be sworn in next month. He will immediately face a pressing roster of crises, including a coronavirus pandemic that is spiraling quickly with a spike in cases and border conflicts in Belarus and Ukraine.

At least 27 dead after boat capsizes in the English Channel

At least 27 people drowned off the coast of France yesterday after an inflatable boat carrying migrants trying to reach Britain capsized in the English Channel. The dead included five women and a girl, said Gérald Darmanin, France’s interior minister. Two people were rescued and hospitalized with severe hypothermia.

The local maritime authorities said they quickly sent out rescue ships and helicopters after a fishing vessel alerted them that several people were lost off the coast of Calais in France. The drownings came a few days after the French and British authorities reached an agreement to do more to stem the number of people taking to the sea.

Attempts to reach Britain by boat have increased as the authorities have cracked down on the smuggling of migrants inside trucks crossing the Channel Tunnel. Many migrants perceive Britain as an ideal destination because English is spoken, they may know people there and the job market is more loosely regulated for undocumented workers.

Responses: “France won’t let the Channel become a graveyard,” Emmanuel Macron, the French president, said. He called for an immediate tightening of border controls. Boris Johnson, the British prime minister, said t he was “shocked and appalled and deeply saddened.”

Related: In Poland, theLaw and Justice party’s tough stance on migrants seeking to enter the E.U. from Belarus has lifted its popularity, which had taken blows because of Covid and rising inflation.

Moving a Covid patient at King’s College Hospital in London this year.Credit…Pool photo by Kirsty Wigglesworth

As England settles into a disquieting new normal of more than 40,000 new cases of Covid-19 a day and around a thousand fatalities each week, Neil Ferguson, a top government scientific adviser, has revived the debate over herd immunity, claiming that the country is close to the threshold at which most of the population is protected against the coronavirus.

The high caseloads may leave the country well placed to resist the fresh wave of infections sweeping across continental Europe, he said, in part because so many Britons had been infected since the lockdown was lifted in July, giving the population as a whole greater immunity.

Ferguson’s comments are likely to raise new questions about Britain’s decision to tolerate a widely circulating virus and a steady death toll as the price of a return to economic normalcy. Other public health experts are skeptical of the herd immunity theory, which, they say, does not consider factors like new variants or waning protection from vaccines.

Analysis: “I don’t think modelers have enough data to assess whether we’ve reached the mythical herd immunity stage,” said Devi Sridhar, head of the global public health program at the University of Edinburgh. “With Covid, it will either be when everyone has had Covid and survived, died of it or been vaccinated against it.”

For the past 50 years, Francisco Luis Ramírez has healed Mexico City’s ailing accordions. He didn’t mince words when our accordion-playing reporter brought in his instrument: “Your accordion is a piece of garbage.” Leer en español.

A novel that riveted France arrives in the U.S.

“The Anomaly,” a novel by Hervé Le Tellier, has become a French literary phenomenon, winning the Goncourt prize and selling more than a million copies in France since its publication in 2020. Now the genre-bending novel, translated into English, is available in the U.S., Roger Cohen reports for The Times.

The story, in a nutshell: A flight from Paris to New York lands on March 10, 2021, after passing through a terrifying storm. One hundred and six days later, the same Boeing 787 flight with the same crew, the same passengers and identical storm damage approaches the East Coast of the U.S. It’s impossible — the passengers and crew must be doubles — and yet.

In an anomalous time, when a deserted Paris was in lockdown for months and much of life moved online, the novel struck a powerful chord by suggesting the flimsiness of all we take for granted, what T.S. Eliot called “the old dispensation.”

“I am surprised by the book’s success given that it’s so experimental, bizarre and a little crazy,” Le Tellier said. “Perhaps reading it was a means of escape.”

Take your pick of these five streaming suggestions for the Thanksgiving holiday.

Here are eight new books to look for in December.

That’s it for today’s briefing. And a happy Thanksgiving to those who are celebrating. — Natasha

P.S. Andrew Lavallee will be The Times’s new editor of Arts and Leisure.

The latest episode of “The Daily” is about India’s farmers.

Surveys suggest violence against women has intensified during the pandemic, a U.N. report says.

Afghan Art Flourished for 20 Years. Can It Survive the New Taliban Regime?

U.K.’s Migrant Boat Dispute Has Eyes Fixed on the Channel

A Times correspondent reports from a plane held on the tarmac in Amsterdam.