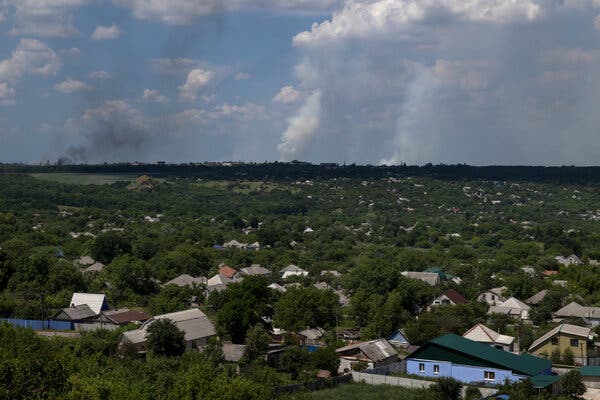 Lysychansk, the last major city held by Ukraine in the eastern province of Luhansk, has fallen, giving Moscow a victory in its campaign to capture the Donbas, a mineral-rich region bordering Russia. Pressure is now redoubling on the U.S. and its allies to get the more powerful weapons they have promised Ukraine to the front.

Lysychansk had held out for a week after Russia seized control of Sievierodonetsk, its twin city across the river. But as Russia inundated Lysychansk with artillery fire and strangled its supply lines, building on months of bombardment and weeks of ferocious street fighting that reduced both cities to grayed-out husks, Ukrainian defenders were forced to retreat.

Russia now controls more than a fifth of Ukraine — much of it cities in name only, skeletal remains emptied of people after months of shelling — but it will need to replenish depleted forces and ammunition as it wages what promises to be a fierce, drawn-out ground war. Russian forces yesterday shelled the Ukrainian city of Sloviansk, killing at least six people.

Next steps: The next phase of the war will prove a test not just of military logistics but also of solidarity for Ukraine’s Western allies. As the conflict drags on, their own citizens are feeling the economic pain, and unity among the allies may be difficult to sustain.

Outside the Field’s shopping center in Copenhagen.Credit…Olafur Steinar Gestsson/EPA, via Shutterstock

Three people were killed and three others wounded in a shooting at a mall in Copenhagen yesterday, the local police said. A 22-year-old Danish suspect has been taken into custody, but the police said they had not ruled out the possibility that multiple people were involved.

The shooting took place at Field’s, the largest shopping center in Denmark. Video and images posted on social media showed people sprinting out of the mall and ambulances lining its exterior. Armed police officers were running near the mall, and a helicopter hovered overhead. A Harry Styles concert scheduled nearby was canceled over safety concerns.

A mall employee told a local news outlet that “masses of people” had run to seek shelter in the Kentucky Fried Chicken at Field’s. Staff members barricaded the doors and remained there for about 45 minutes, the employee said. Other witnesses described scenes of panic and of employees helping shoppers flee through the back rooms of stores.

First person: “He seemed violent and angry, and he was shouting as he ran and took the gun and smashed the windows,” a witness to the shooting told a TV news station. “You’d think it was an action movie as he walked. He seemed very proud of what he did, I could tell.”

The Peace Bridge connecting the Catholic and Protestant sides of Derry, Northern Ireland.Credit…Andrew Testa for The New York Times

After nearly 25 years of peace, residents worry that Derry’s hard-won gains are in jeopardy. Brexit has disrupted Northern Ireland’s fragile political and economic equilibrium, while the British government seems determined to put the Troubles, as the guerrilla war between Catholic nationalists and Protestant unionists is commonly known, and its legacy in the past.

The British government has proposed legislation that would effectively stop new criminal investigations or civil actions in relation to killings committed during the Troubles. That has sparked outrage from the families of victims, who say it would deprive them of justice, especially in cases where British security forces or the police colluded with paramilitary gangs.

While the legislation, which the government hopes to pass this year, affects a much smaller number of people than the post-Brexit trade rules, it is easier to understand and, therefore, may be more likely to stoke tensions. The debate over unsolved killings particularly haunts the police, who are still viewed in Derry with deep resentment by much of the public.

Strained relations: No one is predicting a return to the horrific violence that engulfed Derry in the Troubles. But paramilitary groups like the New I.R.A., the Irish National Liberation Army and the Ulster Defense Association still operate in Derry’s neighborhoods, mostly in the drug trade, the police say.

Millions of New Yorkers are entering a third pandemic summer, and sidewalks are teeming, happy hours are hopping and tourists are back.

Across five days and five boroughs, Dodai Stewart, a reporter for The Times, went forth to find out how the city feels now, and to answer one question: What’s the vibe?

Last year, the publishing industry noticed that the books readers gushed about on TikTok were showing up on best-seller lists. Publishers, authors, even the makers of the videos were surprised. A year on, #BookTok has become a sustained and powerful force, helping authors to sell 20 million printed books in 2021.

BookTok is dominated by regular readers, many of them young, who speak plainly about the emotional journey a book will offer. “‘This is how it makes me feel, and this is how it’s going to make you feel,’” said Milena Brown, the marketing director at Doubleday, describing the videos’ content. “And people are like: ‘I want to feel that. Give it to me!’”

Books that take off there are mainly fiction and are generally a few years old. This is unusual in publishing, where most titles, if they have a burst of sales at all, see it right out of the gate. Young adult titles are a major category, along with romance, science fiction and fantasy. But even classics like “Wuthering Heights” and “The Great Gatsby” get some TikTok love.

In Hawaii, mac salad isn’t just a side dish; it’s a condiment unto itself. Find the recipe here.

Explore our list of the best films of 2022 so far.

And here’s today’s Wordle and the Spelling Bee.

The latest episode of “The Daily” is on life before and after Roe v. Wade.

Tags
New Out People That Year

Abortion Laws Around the World

The U.S. and Latin American countries will commit to receive more migrants.

At the ‘Logistics Games,’ Just Arriving Is a Victory

Women’s Basketball Players Get a New Lifeline, Close to Home