For nearly a decade, families visited a small coffee shop in suburban Long Island for pastries and gelato. Many were unaware of the longstanding operation playing out just feet away from them: Mafia members were running a secret underground gambling den in the store.

The business was one of several across the island and in Queens that served as a front for two of New York’s oldest crime families and their illegal moneymaking schemes, according to two federal indictments unsealed Tuesday. When other gambling clubs threatened their fortunes, an active Nassau County detective offered to conduct police raids on them, in exchange for payments, prosecutors said.

On Tuesday, nine reputed members and associates of the Genovese and Bonanno clans — including the detective— were charged in a racketeering case brought by the U.S. attorney’s office in Brooklyn that centers on the illegal parlors and the money laundering and extortion schemes.

Federal prosecutors said that for 10 years, the gambling activities brought in “substantial revenue” for the two families as they hid under the cover of businesses like a soccer club and a shoe repair store. The Long Island coffee shop alone typically earned them more than $10,000 per week, funds which were laundered up to the crime families’ leaders.

Breon S. Peace, the U.S. attorney for the Eastern District of New York, said in a statement Tuesday that the arrests “demonstrate that the Mafia continues to pollute our communities with illegal gambling, extortion and violence while using our financial system in service to their criminal schemes.”

He added: “Even more disturbing is the shameful conduct of a detective who betrayed his oath of office.”

The Nassau Police Department and the county’s largest police union did not immediately return requests for comment.

The power of the city’s five fabled Mafia clans began to decline in the 1980s and 1990s, as aggressive prosecutions disrupted their leadership and the authorities targeted their control of unions. The Bonanno family in particular saw a string of damaging convictions and defections through the 2000s, including the family’s longtime boss, who began cooperating with the authorities after a 2004 conviction for a series of murders.

The families still exist, but with far less widespread fortunes.

In recent years, they have faced charges for similar types of organized crime — extortion, illegal gambling, fraud — in both large-scale conspiracy cases that have extended down the East Coast to others that have continued to home in on the family’s leadership. Cooperation between the families has also been a frequent theme of some indictments.

In the Brooklyn case, the Genovese and Bonanno crime families began to run the Long Island coffee shop — known as the Gran Caffe in the Lynbrook area — around May 2012, according to the indictments.

Members of the two clans agreed upon a profit split for the gambling facility and each helped maintain the operation: Associates of both families would collect the profits and then distribute them to higher-ranking members, prosecutors said.

In their detention memo to the judge, prosecutors argued that the “seriousness of the danger posed by the defendants’ release should not be underestimated” and that the men represented a significant flight risk. Citing the prior convictions and violent histories of several of the men, the prosecutors wrote that they should be released only with strict monitoring conditions and after posting heavily secured bonds.

The case was prompted by a multiyear joint investigation by several agencies, including federal prosecutors in Brooklyn, the F.B.I. and the Nassau County district attorney’s office.

Ukrainian Soldiers Train for the Frontlines on British Soil

Why a Century-Old Vaccine Offers New Hope Against Pathogens

‘This Was Trump Pulling a Putin’ 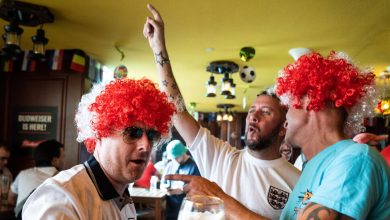 England Had a Game, but First Its Fans Had a Quest. For Beer.

Remembering What Draws You In

Parents Face a Haunting Question: Is Any Schoolchild Safe?