WASHINGTON — Senior Biden administration officials say they believe that the next four weeks will shape the eventual outcome of Russia’s war in Ukraine, with long-lasting ramifications that will influence the drawing of the map of Europe for decades to come.

While the officials still expect the war to be long and grinding, they say that it is imperative to rush Ukraine as many new weapons as possible — especially long-range artillery and anti-artillery radar — to push back Russia’s new advance in the eastern Donbas region.

Reflecting the renewed sense of urgency, President Biden announced on Thursday that the United States would send Ukraine an additional $800 million in military aid, the second such package in just over a week.

Mr. Biden said the latest aid package sent “an unmistakable message” to President Vladimir V. Putin of Russia: “He will never succeed in dominating and occupying all of Ukraine.”

In remarks at the White House, Mr. Biden said that while the United States would announce many details of the arms it is shipping to Ukraine, some of the weaponry would be kept secret. The president borrowed, and modified, a famous line by Theodore Roosevelt, saying that the United States would “speak softly and carry a large Javelin,” a reference to the antitank weapon that the Ukrainians have used effectively against Russian armor.

Determined to move swiftly, Defense Secretary Lloyd J. Austin III and Gen. Mark A. Milley, the chairman of the Joint Chiefs of Staff, spoke with allies around the world this week and characterized the next month as pivotal.

If Russia can push through in the east, Mr. Putin will be better positioned at home to sell his so-called “special military operation” as a limited success and claim he has secured protection for Ukraine’s pro-Russia minority, American officials said. He might then seek a cease-fire but would be emboldened to use the Donbas as leverage in any negotiations, they said. The officials spoke on the condition of anonymity to discuss operational matters.

But if the Ukrainian military can stop Russia’s advance in the Donbas, officials say Mr. Putin will be faced with a stark choice: commit more combat power to a fight that could drag on for years or negotiate in earnest at peace talks.

The first option might mean a full national mobilization, officials say, and is politically risky for the Russian leader.

The next phase of the war “will be critically important,” said Peter Maurer, the president of the International Committee of the Red Cross, who visited Ukraine in March. “The escalation of hostilities in Donbas, and all areas affected by the armed conflict, is of utmost concern.”

With all four, the discussions were the same, officials said: how to ship more powerful weapons to Ukraine in the coming weeks.

After weeks of focusing on antitank and antiaircraft weaponry like Javelins and Stingers, the new shipments over the last week have included long-range artillery, tactical vehicles and mobile radar systems to help the Ukrainians detect and destroy Russian artillery positions.

Other countries are sending tanks, more artillery and anti-ship missiles.

A senior Defense Department official described the next month as a crucial turning point for both Russia and Ukraine. This phase of the battle ostensibly favors Russia to some degree, as Russian troops move over more open terrain as opposed to getting bogged down in cities.

But the official said the Pentagon believed that with the right weapons and a continuation of high morale and motivation, the Ukrainian forces might not only stop the Russian advance, but also push it back.

“The Russians are in a weakened state from which they may well be able to recover given enough time and new conscripts,” said Evelyn N. Farkas, the top Pentagon policy official for Russia and Ukraine during the Obama administration, when Russia annexed the Crimean Peninsula. “Therefore, it is paramount to strike at them now with everything we can give the Ukrainians.”

Current and former U.S. military commanders with experience in Ukraine and Europe agreed.

“It is make or break for Ukraine in that they must stop the Russian advance to seize all of the Donbas,” Maj. Gen. Michael S. Repass, a retired former commander of U.S. Special Operations forces in Europe who has been involved with Ukrainian defense matters since 2016, wrote in an email.

If Mr. Putin succeeds in seizing the east and establishes a land corridor to Crimea, General Repass said that Moscow would have a stronger position in any negotiated settlement.

“In another month, I anticipate exhaustion on both sides without a military decision/outcome either way,” General Repass wrote. “A stalemate means Putin wins, and if Putin ‘wins’ we are in for a rough ride.”

To try to prevent such an outcome, current and former American commanders say Ukraine’s army will seek to disrupt Russia’s military buildup around the eastern city of Izium and other important staging areas with long-range artillery and armed drone attacks.

A new phase of the war. Russia’s fight to gain control over Ukraine’s industrial heartland in the east is underway. Both sides are trading artillery barrages as Russia tries to break through Ukraine’s defensive positions in multiple locations.

A new missile test. Russia test-launched a new Sarmat intercontinental ballistic missile, declaring it a pointed warning to Ukraine’s Western allies. Russia’s Defense Ministry said the missile could carry multiple nuclear warheads, though it is not clear whether it possesses game-changing capabilities.

Under continued siege. President Vladimir V. Putin of Russia called off an assault on a steel plant that has become Ukraine’s last foothold in the port city of Mariupol, ordering Russian forces to blockade it instead, as he tries to claim a victory in one of the war’s bloodiest locations.

Sending military aid to Ukraine. Ukraine’s allies are scrambling to deliver more advanced weapons for the battle in the east. President Biden said that the United States would send an additional $800 million in military aid to Ukraine including heavy artillery, dozens of long-range weapons, drones and ammunition.

“It is also about disrupting the Russians while they are still in reconstitution and preparation mode, before they can really get back up on their feet,” said Lt. Gen. Frederick B. Hodges, a former top U.S. Army commander in Europe who is now with the Center for European Policy Analysis.

Even as Moscow narrows its goals and consolidates its army in southern and eastern Ukraine, the outcome of the war remains unclear at best, military analysts said. Indeed, the underlying weaknesses in the Russian force, which were exposed in the early weeks of the conflict, have not necessarily gone away, they said.

For instance, the thousands of Russian reinforcements pouring into Ukraine — including mercenaries, conscripts and troops pulled from far eastern Russia and Georgia — have not trained together, analysts said.

Ukrainian soldiers towed a captured Russian tank in Nova Basan, Ukraine, this month. As Russian forces push into the Donbas, they will extend their supply lines and could confront the same logistics shortfalls that bedeviled them before, officials said.Credit…Ivor Prickett for The New York Times

The battered units that retreated from northern Ukraine will also need time to regroup. Some will be replenished and sent back to the fight. But others are so damaged that their remaining pieces will be patched together into one new unit, analysts said.

“They don’t have many options for generating new forces if the current units face too much attrition,” said Rob Lee, a Russian military specialist at the Foreign Policy Research Institute in Philadelphia and a former U.S. Marine officer.

“Once this offensive begins in earnest, Russia will face more losses,” Mr. Lee said. “At a certain point, attrition will be too great and will limit the Russian military’s ability to effectively conduct offensive operations.”

As Russian forces push into the Donbas, they will extend their supply lines and could confront the same logistics shortfalls that bedeviled them before, officials said.

Even if Russian forces prevail in the next month or so, the specter of that army then advancing on western Ukraine or beyond Ukraine’s borders — a real fear at the start of the war — now seems far-fetched, several officials said.

“Win, lose or draw, the Russian military is likely to be a spent force after this next phase,” said Michael Kofman, the director of Russia studies at CNA, a research institute in Arlington, Va.  “Russia would be hard-pressed to sustain any campaign beyond the Donbas.”

But the senior Defense Department official warned that for Mr. Putin, all of Ukraine — not just the Donbas — has always been the ultimate prize.

Dozens of Bald Eagles Have Died From Bird Flu

C.D.C. Issues Alert Over Cluster of Hepatitis Cases in Children 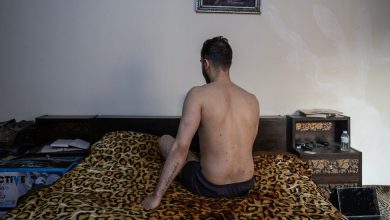