In the process, the family running the company, Ron Santa Teresa, has gone from bankruptcy to exporting an award-winning vintage rum.

By Isayen Herrera and Anatoly Kurmanaev

SABANETA, Venezuela — They once used the house to hide their kidnapping victims as they awaited ransom. Now they are converting it into an office for a rum distribution business.

The drastic shift by the crime boss Luis Oropeza and his gang is part of an unusual social reintegration project that has brought relative calm to the town of Sabaneta as lawlessness engulfs much of Venezuela.

What is even more surprising is that the program has also helped its founder, the rum maker Ron Santa Teresa, to survive — and even thrive — in a country where the economy has been caught in a downward spiral for years and the authoritarian government has systematically quashed dissent. 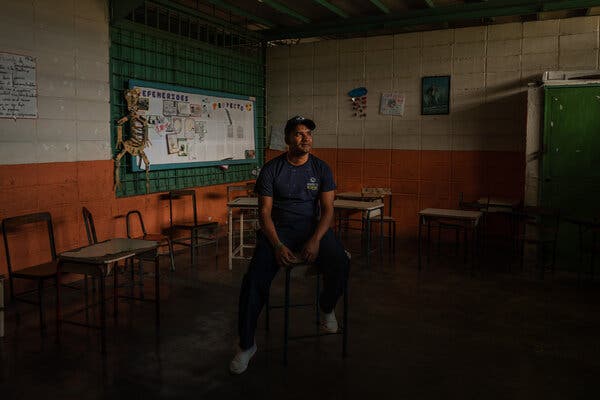 As part of the initiative, Luis Oropeza, 32, and his gang members are helping renovate a school.

The front door to Mr. Oropeza’s former house is riddled with bullet holes. In 2018, Mr. Oropeza’s gang killed a bodyguard and friend of Alberto Vollmer, whose family runs Santa Teresa.

Instead of joining the scores of businessmen fleeing the country to escape kidnappings, arrest or financial ruin, the aristocratic Vollmer family that runs Santa Teresa chose to stay and engage with Sabaneta’s criminal gangs and with the socialist government that had once promised to destroy the country’s elite. In the process, the Vollmers have gone from declaring bankruptcy to becoming exporters of an award-winning vintage rum.

“If you become an absentee owner, you don’t have the relevance and the authority to sit down with whoever you need to sit down,” said Alberto Vollmer, 53, the family scion who led the company’s restructuring. “You have to walk the talk.”

Mr. Vollmer’s leadership has also helped break the vicious cycle of murder and revenge that had made Sabaneta one of the most violent towns in the country.

“We want to use this business opportunity to show that another way is possible,” said the crime boss, Mr. Oropeza, 32, who said he killed his first victim at 16.

When the project, known as Alcatraz, began in 2003, the county surrounding Sabaneta recorded 174 homicides per 100,000 residents, on par with the capital of El Salvador in the mid-2010s, when the Central American country had the highest murder rate in the world.

Although the Venezuelan government long stopped publishing statistics, Santa Teresa estimates the rate has dropped to a quarter of that figure. Anecdotal evidence appears to support the claim.

Violent crime has dropped drastically in the town of Sabaneta. When the Alcatraz project began in 2003, the county surrounding Sabaneta recorded 174 homicides per 100,000 residents.
Kerling Coronado with her husband, Brayan Hernandez, at the pastry shop they opened with the help of Alcatraz. “I used to get panic attacks as soon as the night came,” she said of the violence the town was known for.

“I used to get panic attacks as soon as the night came,” said Kerling Coronado, who is married to one of the reintegrated former gang members. “I couldn’t sleep. I felt as if someone was smashing my door, because they used to burst into people’s houses to kill them.”

Santa Teresa contends that 70 percent of 216 gang members that went through Alcatraz — a two-year re-education program that includes rugby games, psychology sessions and vocational training — no longer pursue a life of crime. More than 100 of them have been employed by the company.

Mr. Oropeza, the latest crime boss to pass through Alcatraz, lost three brothers and two cousins to gang violence. One was shot 200 times in the face one Christmas Eve, he said; another was decapitated and his head used as a football by his enemies.

“It was either them, or it was you,” said Gregorio Oropeza, Mr. Oropeza’s surviving brother and fellow former gang member, referring to the incessant violence.

Most of the 14 men who enrolled in the program with Mr. Oropeza had spent time in jail, had killed or had relatives killed. It took years of negotiations for Santa Teresa to overcome gang members’ fear of being ambushed by rivals or exterminated by the police, and to submit to re-education.

Accepting Mr. Oropeza into the program presented a challenge for the company as well. In 2018, his gang killed a bodyguard and friend of Mr. Vollmer.

“We ask so many people to forgive,” said Gabriel Álvarez, the general manager of the Alcatraz project. “When it was our turn, we could not say no.”

To try to make amends to the town they once terrorized, Mr. Oropeza’s gang members are now creating a company that will distribute Santa Teresa’s products as well as renovating a school and church.

“I wished this project would have arrived earlier,” said one resident, Cristina Ladaez, 40. “We wouldn’t have had to live through so much death.”

Alcatraz’s focus on providing financial opportunities and psychological training to gangsters contrasts sharply with the Venezuelan government’s alternating attempts to either tolerate or exterminate criminals. The gangs have only grown bigger and more coordinated as a result, said Veronica Zubillaga, a Venezuelan sociologist studying organized crime.

Children playing rugby in the streets of Sabaneta as members of Alcatraz repaint a school. The initiative contrasts sharply with the Venezuelan government’s alternating attempts to either tolerate or exterminate criminals.
A church in downtown Sabaneta. Dismantling gangs has reduced theft and kidnapping threats against Santa Teresa’s property and employees, Mr. Vollmer said.

In a country where three out of four people are estimated to live in extreme poverty, crime can be one of the few options available to young men in destitute neighborhoods, she said.

Alcatraz proved to be a good business strategy for Santa Teresa, underscoring the company’s ability to combine social consciousness with commercial gain.

Rugby practice. The matches that Santa Teresa organizes have been a powerful marketing tool.
Members of the Alcatraz project during a behavioral psychology class in Sabaneta. Santa Teresa contends that 70 percent of the 216 gang members that went through the program no longer pursue a life of crime.

And after Alcatraz expanded to Venezuela’s jails in 2007, Santa Teresa’s executives were able to foster relationships with underworld bosses, shielding the company from the extortion fees that plague most other businesses in the country.

“Organized crime pulls on invisible nylon strings,” Mr. Vollmer said. “They are clearly a very important stakeholder in the country.”

Santa Teresa is now Venezuela’s largest rum maker, surpassing its prepandemic sales this year. Its flagship product, a vintage blended rum called 1796, has won multiple awards and is now available in high-end bars around the world, thanks to a distribution deal with the alcohol giant Bacardi.

Alcatraz is only one example of the company’s novel approach to managing Venezuela’s turmoil.

In 2000, when hundreds of poor families invaded the company estate with the government’s support, Mr. Vollmer voluntarily provided part of his land for a social housing initiative.

Applying labels of the signature 1796 blend to the bottles. It has won multiple awards and is available in high-end bars around the world.
Anther Herrera, a participant in the Alcatraz project, during a rum tasting event at Hacienda Santa Teresa. The initiative is only one example of the company’s novel approach to managing Venezuela’s turmoil.

The offer helped the company escape expropriation and allowed Mr. Vollmer to build important relationships with the government of Hugo Chávez, who was then president.

“We converted this crisis into a great opportunity,” Mr. Álvarez said.

It was an unlikely partnership. The Vollmers, who trace their lineage to the independence hero Simón Bolívar, epitomize the hereditary elites whose wealth Mr. Chávez said belonged to ordinary people.

“Oligarchs, tremble!,” Mr. Chávez said shortly after taking power in 1999. He spent the next 14 years in office nationalizing their businesses and shutting them out of the lucrative import deals that had long sustained their fortunes.

Big businesses responded by supporting a coup against Mr. Chávez and trying to topple him from power through a three-month national strike.

Mr. Vollmer’s collaboration with Mr. Chávez, and his successor, Nicolás Maduro, has angered many of his peers, who accused him of aiding a government they say has destroyed democracy and committed grave human rights abuses.

Mr. Vollmer shrugs off the attacks, pointing out that it is easier to criticize from exile than to try creating positive change from within Venezuela.

“Starting in our county, we want to build a society that is better,” he said.

Alcatraz members repainting a school in an area in Sabaneta where a gang used to operate. The project has proved to be a good business strategy for Santa Teresa.
Tags
Alcatraz Busi̇ness Sai̇d Venezuela Who

What Are Political ‘Surgeries’ in Britain?

When Listening to a Book Is Better Than Reading It

Who is Abdalla Hamdok, the Sudanese prime minister detained in a military coup?