NEW DELHI — Eight people were killed on Sunday in an incident that protesting farmers said was the fault of a prominent Indian leader, as nearly yearlong demonstrations against a government revamp of the country’s agriculture laws threatened to enter a more volatile phase.

The police have said they are investigating the deaths of four farmers and four others in the north Indian state of Uttar Pradesh. Protest leaders said a vehicle plowed into demonstrators as part of a convoy traveling past the site.

The police said they were investigating whether Ashish Mishra was in the car that struck the protesters, as the protest’s leaders have claimed. He is the son of Ajay Mishra, India’s minister of state for home affairs.

Ashish Mishra told Indian TV news channels on Monday that the allegations against him were “baseless.”

The state police temporarily shut down internet service in the area, in an apparent effort to calm tensions.

The incidents have injected fresh political vitriol into protests that have plagued New Delhi, India’s capital, and the surrounding regions since late November. Huge numbers of north Indian farmers have occupied protest camps on the outskirts of the capital in demonstrations against a trio of market-friendly farm laws that they say will put many of them out of business.

The tensions have repeatedly flared into violence. The worst incident took place in January, when farmers stormed New Delhi with tens of thousands of tractors and broke through police barricades. In return, the government sent forces to try to arrest farm leaders and clear the tents where they had been camped out for months.

The protests intensified last month in the state of Haryana, next door to Uttar Pradesh, after a local official was captured on video ordering the police to use violence to break up one gathering. The state authorities deployed additional troops and switched off the internet, but the tensions eased only after the government agreed to investigate the official’s conduct.

The incident on Sunday took place in the Uttar Pradesh district of Lakhimpur. Protesters were trying to block a visit by the elder Mr. Mishra and a state minister from Prime Minister Narendra Modi’s Bharatiya Janata Party.

As Mr. Mishra’s convoy was traveling past the site, a vehicle occupied by his son and others deliberately plowed into the farmers, according to farmers’ union leaders.

Boris Johnson Quits Amid Latest Scandal, a Messy End to a Messy Tenure 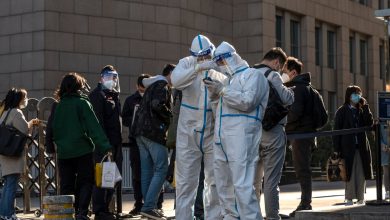 At Great Dixter, Getting Your Hands Dirty Is the Point