The radical climate activists tried hunger strikes. They glued themselves to famous paintings. They tried to disrupt a classical concert. They confronted lawmakers trying to enter Parliament. They even desecrated an official Christmas tree of the city of Berlin.

It took them donning neon vests, walking into traffic at rush hour and gluing themselves to the streets in Berlin and Munich, causing miles-long backups and bringing drivers to murderous rage, to make their protest impossible to ignore.

With their actions, carried out with increasing frequency as 2022 drew to a close, they have attracted enormous attention in a country where cars reign supreme, home to BMW, Mercedes, Volkswagen and the autobahn. But they have also united almost everyone in politics in Berlin, and much of the public, against them.

They have become a target for conservatives and embarrassment for the governing Green Party, which has long been working within the political system toward the same goals. And their tactics have stirred debate even within the broader environmentalist movement over how much is too much in pursuit of climate goals.

Police rescuers removing a Last Generation activist in October who had glued herself to a structure over Berlin’s orbital highway.Credit…Sean Gallup/Getty Images

The answer from the protesters, who are the German chapter of an environmental group called Last Generation, is that the climate crisis warrants drastic action. Founded in 2021 when a small number of activists went on a weekslong hunger strike in front of the Parliament building in Berlin, the group is now well-funded and has since grown to include a few hundred active members, whose actions have earned, among other things, a reference in the president’s Christmas speech last week — a sign that their protests have struck a nerve.

Their immediate demands — things like ending food waste, enforcing strict speed limits to reduce emissions and subsidizing rail travel — may seem tame, but their ultimate message is urgent: The world is in a climate emergency and business as usual is not an option.

“They mix claims really easy to implement, majority-winning policy claims — things that are quite accessible for a majority of the population — with a system criticism,” said Daniel Saldivia Gonzatti, who studies protests at WZB Berlin Social Science Center. “It’s effective.”

And enraging. Friedrich Merz, the head of the conservative opposition, called Last Generation a criminal organization and wants the authorities to test whether it could be declared illegal. Another politician, Alexander Dobrindt, the parliamentary leader of the Bavarian conservative party, compared the group to the Red Army Faction, a notorious band of left-wing terrorists who robbed, murdered and kidnapped in the 1970s.

But to Last Generation’s members, extreme action is the answer to government inaction.

Last Generation activists cut the top of a Christmas tree at Brandenburg Gate in Berlin.Credit…Christian Mang/Reuters

“The government has ignored over one million people on the streets in Germany alone and the government is ignoring scientists,” said Carla Rochel, a 20-year-old student who was one of the early members of Last Generation, referring to Fridays for Future, a series of peaceful protests that peaked before the pandemic. “That’s why we decided to take to the streets and simply not go away anymore.”

The mass-market daily Bild has called the traffic-stopping protesters “climate hacks” and has published unflattering portrayals of individual participants. In some states the legal system has gone into overdrive: Bavaria locked up more than a dozen Last Generation members preventively for days, and elsewhere state prosecutors raided the activists’ homes and confiscated personal electronics while investigating whether the group constitutes a “criminal gang.”

For group members, who besides being committed are also often well-spoken and photogenic, the negative attention has worked in their favor to an extent, giving them a prominent place in the German news media, including on televised debate shows alongside powerful politicians.

“From being called terrorists to sitting with the justice minister in a talk show in the span of the week is quite a measure of success,” said Mr. Saldivia Gonzatti, the academic studying protests.

The group has drawn criticism even in environmental circles over whether its more extreme actions, which are also being used by climate activists in countries like Britain, may be backfiring and are becoming a distraction that is turning people off from the climate cause.

A march in Berlin last spring organized by the Fridays for Future movement. One prominent member fears road-blocking protests have shifted attention from the climate to activists’ tactics.Credit…John Macdougall/Agence France-Presse — Getty Images

Luisa Neubauer, a prominent member of the Fridays for Future climate movement, said that while the group’s reason for blocking traffic was legitimate, she worried that the public had become so focused on the activists that the problem of climate change had become less visible.

On a recent and exceedingly chilly and damp weekday morning, six protesters from Last Generation walked into a crosswalk on a busy road leading to the storied Potsdamer Platz, one of downtown Berlin’s most traffic-jam-prone spots, and unfurled banners and then little rubber seating mats.

After a second’s pause, they sat down in unison and with seemingly choreographed motion each began gluing one of their hands to the wet pavement.

Within seconds, drivers starting honking and trying to go around the protesters onto the median. Within minutes, the police arrived and tried to pull away the protesters. Because the pavement was wet, the officers managed to pull four of the activists onto the sidewalk — two more could not be budged and a special unit had to be dispatched dissolve the glue using oil and solvents.

“One of the scariest moments is when the cars start rolling toward you, pushing themselves through people as though they don’t intend to stop,” said Irma Trommer, 26, who has taken part in similar human road blocks dozens of times.

Last Generation activists blocking a street at Potsdamer Platz in Berlin in December. “One of the scariest moments is when cars start rolling toward you,” one said.Credit…Sean Gallup/Getty Images

Not everyone thinks their form of activism is productive.

“It annoys me, maybe that’s embarrassing,” said Renate Künast, a Green Party stalwart and former federal minister, who has spent nearly two decades in federal politics. Democracy is a process, she said, and even in her position she can’t make climate dominate the conversation in Parliament.

The activists gained a new level of infamy in November when a cyclist in Berlin died after being pinned by a cement mixer during one of the group’s traffic jams.

Early reports suggested the woman could have survived if a specialized emergency vehicle could have made it through the backup. Reaction was swift, with many condemning the activist group. It later turned out that a doctor on site had already decided on a different course of action that did not require the traffic-bound emergency vehicle.

“Now at the latest we should say goodbye to the fairy tale of the harmless protest,” the speaker of a powerful police union said at the time.

Polls taken just after the accident found that 80 percent of Germans were critical of the group’s action and 86 percent thought the actions ended up hurting the cause of fighting climate change.

A driver trying to move an activist blocking a Berlin road. In December, Last Generation was blocking roads in the capital on three to four mornings a week.Credit…Christian Mang/Reuters

The notoriety has only galvanized the group, whose numbers have grown from just a couple of dozen in the summer to hundreds of activists and supporters. In December the group was blocking traffic in Berlin on three to four mornings a week, sometimes at multiple locations.

“The future I personally am heading for, if climate policy does not change, is so much more uncertain than anything I am taking on here,” said Ms. Trommer, referring to not just the very real possibly of violence she faces from frustrated drivers, but a permanent criminal record she could walk away with.

“My hope is that by showing that I’m willing to risk myself doing these actions, how crazy threatening the global situation is for people of my age,” she said, rubbing her hand, which was torn off the pavement by a policeman before the glue had set.

Tags
Climate Protest Said That With

My Uncle Taught Pelé Guitar: The Mourning Is Deeper in One City

‘Biofoul’ on Hull Strands Cruise Ship at Sea for 6 Days

For UConn, a Rougher Path Than Usual Still Leads to the Final Four

Al-Zawahri’s Death Puts the Focus Back on Al Qaeda 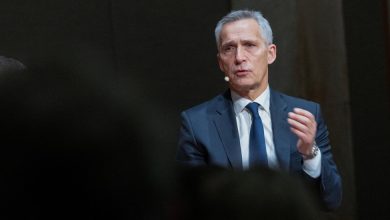 NATO’s secretary general warns that a ‘full blown war’ with Russia is ‘a real possibility.’