TIRASPOL, TRANSNISTRIA — At the Back in the U.S.S.R. cafe, it is like the Soviet Union never collapsed.

Busts of Lenin greet visitors at the door. Red hammer and sickle flags hang on the wall. Huge plastic Soviet-era telephones sit on the tables, next to bowls of traditional borscht and lumps of Stolichnaya potato salad.

This cafe and the whole Transnistria region, a Russia-supported breakaway republic wedged between Moldova and Ukraine, feels like a Soviet-themed vintage shop. The cafe may be intentionally kitschy, but still, it speaks to a real nostalgia for a long-gone era and a deep appreciation for Russia.

“Russia has been like a big brother to us,” said the restaurant’s owner, Igor Martiniuc.

Until a few weeks ago, he said, “life was good.”

For three decades, this intriguing, rarely visited breakaway region has quietly survived as Russia’s little buddy, a self-declared republic at the southwestern edge of Moscow’s sphere of influence. Russia helped Transnistria fight a separatist war and split off from Moldova, creating a pro-Moscow island of Russian speakers, essentially a mini-Russia, hundreds of miles from Russia itself.

But now, despite years of benefiting enormously from Russian patronage and protection, Transnistrians want no part of Russia’s war with Ukraine.

“Most people here want to protect themselves and their businesses,” Mr. Martiniuc said. “They don’t want to get involved.” 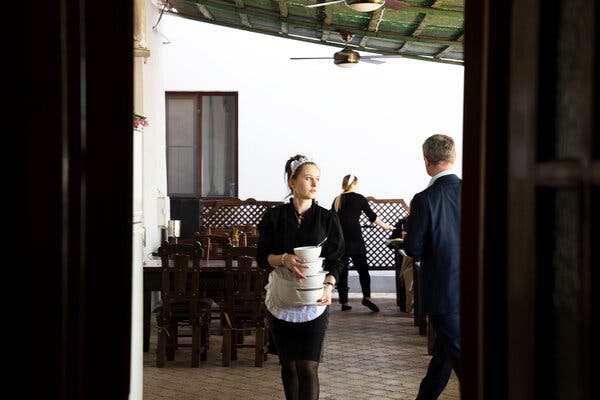 Mihailovsckaya Edita, 19, a waitress at the Back in the U.S.S.R. cafe in Tiraspol.

Memorabilia at the cafe evokes the Soviet era.

Over the past month, there have been signs that Russia is in fact trying to engulf Transnistria in the war and sow fear and uncertainty in the West. A Russian general suggested that Moscow’s troops might charge up the Black Sea coast to rescue what he called oppressed Transnistrians. Though Western officials have said Russia lacks the military ability to do that anytime soon, it immediately raised the specter of the war spilling closer to the European Union.

Ukrainian forces rushed reinforcements to the border. Then, a few days later, a string of mysterious bombings rattled Transnistria, throwing the snake-shaped sliver of territory into red alert.

But if Russia really hopes to leverage its close relationship with Transnistria to its advantage, it might have miscalculated — in the same way it wrongly assumed its soldiers would be welcomed in Ukraine. Transnistrian authorities are now trying to furiously signal that their longstanding friendship with Russia has its limits.

“We have no plans to enter the war,” said Paul Galtsev, a spokesman at Transnistria’s Ministry of Foreign Affairs, housed in a quaint, three-story stone house. “We’ve made no aggressive plan, no tactical attack preparations, no request to Moscow for more troops.”

“We are small and peaceful,” he said. “We don’t want to go to war with anyone, especially with Ukraine.”

Transnistria has managed to avoid choosing sides while following its own system. It is still technically part of Moldova, but it lies outside Moldovan government control. It prints its own money (the Transnistrian ruble), flies its own flag, sings its own anthem and runs an industrial economy supporting around 300,000 people.

A group of friends hanging out and listening to loud music while polishing their cars in the center of Tiraspol.
A supermarket in Tiraspol. Sheriff is part of a government-controlled monopoly of stores.

It does all of this thanks to billions of dollars in subsidies from its benefactors in Moscow, which in return gets a strategic enclave at the edge of the European Union where it bases at least 1,500 troops.

Until Russia invaded Ukraine in February, the world had mostly forgotten about those troops. Now their presence takes on a new dimension.

During a reporting visit this month, after the first wave of mysterious explosions, New York Times journalists saw new sandbag positions across Tiraspol, the capital. Boyish Russian soldiers strutted down the city’s grand boulevards in squads of twos and threes, Kalashnikovs gleaming.

The Russian media bubble, which dominates in Transnistria, blamed the explosions on Ukrainian saboteurs. But outside analysts believe they are the handiwork of Russian saboteurs trying to firm up local loyalties — much the same tactic Russia used in the Donbas region of eastern Ukraine.

The explosions have been small and have not hurt anyone. But there could be a much bigger one. At the edge of Transnistria, right on the Ukraine border, sits the Cobasna ammunition dump, one of the largest arms stockpiles in Europe.

A Soviet-era relic guarded by hundreds of Russian troops, Cobasna holds a staggering 44 million pounds of bullets, grenades, rockets and artillery shells. Some of the inventory is more than 60 years old, and no one knows what kind of shape it is in. Some arms experts have warned that if Cobasna gets hit and the whole stockpile blows up, the explosion could rival the size of the Hiroshima bomb.

Residents in the center of Tiraspol. The hostilities in Ukraine have many worried it will spill over the border.
Many Transnistrians say they do not want to choose between Russia and Ukraine.

Transnistria’s elites had been deftly playing this territory’s unusual status, getting cheap gas from Russia to power their factories, smuggling goods out of Ukraine with the help of Ukrainian criminal networks and using Moldovan customs channels to export goods legally to the European Union.

But with Ukrainian ports now closed, the flow of goods and visitors has dropped. The other day, the Back in the U.S.S.R. cafe was mostly empty. Many Transnistrians said they did not want to choose between Russia and Ukraine. Both are part of their history.

In the 1920s, Soviet authorities carved out an autonomous zone from Ukrainian territory along the eastern banks of the Dniester River, a major waterway that traditionally separated Russia’s sphere of influence to the east and Romanian-speaking areas to the west.

During World War II, the Nazis and their Romanian allies invaded, massacring hundreds of thousands, especially Jews. Soviet forces eventually ran them out and built up the Moldavian Soviet Socialist Republic. But they did not develop the republic evenly; they constructed gigantic factories and power plants in the Russian-speaking areas, the region that would become Transnistria.

It was part of a larger strategy to create Russian-dominated enclaves across the Soviet republics; the Russians also did this in South Ossetia, Georgia, and the Donbas, in Ukraine. Both of those areas eventually exploded in bloodshed.

In 1990, Transnistrians felt Moldova was leaning too close to Romania, which many still associated with Nazism. So they declared independence, and two years later, with the help of Russian troops, won their separatist battle against Moldova.

No United Nations member state has recognized Transnistria’s independence, not even Russia, but the Russian troops never left.

Military analysts said there were at least 1,500 troops in Transnistria, whom the Kremlin calls “peacekeepers,” along with 3,000 to 12,000 Transnistrian soldiers, including reservists. Their weapons are light — a few armored trucks, no working helicopters, some old artillery — hardly an invasion force.

Transnistrian security forces patrolling a park in the center of Tiraspol.
A Russian military vehicle just outside Tiraspol.

“It would be stupid for Russia to try to use this against Ukraine, and the Ukrainians know it,” said Anatoly Dirun, a Transnistrian political scientist and opposition politician.

He said that Ukraine and Russia were pumping up the threat to Transnistria for their own, different reasons.

Two countries inch closer to NATO. The foreign ministers from Sweden and Finland are poised to meet with their NATO counterparts to discuss the prospect of joining the alliance. In apparent retaliation, Russia halted exports of electricity to Finland after saying that a NATO expansion would pose a threat to its own national security.

A possible spoiler? A day after President Recep Tayyip Erdogan of Turkey suggested that he would be reluctant to welcome Finland and Sweden into NATO, a spokesman for the leader said the country was not trying to block the two nations’ potential membership in the alliance, but rather ensure that all members’ security concerns are considered.

On the ground. Russia’s military offensive in eastern Ukraine remains stalled, and the Ukrainians are on the offensive around the northeastern city of Kharkiv. Ukraine’s defense minister warned that the war had entered a “new, long phase” with “extremely tough weeks” ahead.

War crime case. The Ukrainian judicial authorities began a case against a Russian soldier accused of shooting a civilian. It is the first trial involving a suspected war crime by a Russian service member; the victim was a 62-year-old man on a bicycle in a village in Ukraine’s Sumy region.

Russia is trying to draw Ukrainian troops away from the battle in the east. And Ukraine is trying to paint a picture of a spreading war so the West sends more weapons.

He and others said that Russia could not easily fly reinforcements into Transnistria even if it wanted to because the planes would have to cross Ukrainian or European airspace, putting them at risk of being shot down.

But the flow of cheap Russian gas has not stopped, allowing Transnistria’s factories to make shoes, textiles and steel bars at competitive prices. Russia subsidizes this because Transnistria serves as a powerful geopolitical lever, especially on Moldova, which wants to join the European Union but is much less attractive with Russian troops on its soil, among other issues.

The results are on display. Tiraspol looks good. The parks are coifed, the boulevards are almost too wide and there is even a hockey rink. Russian toys sell in the toy shops, Russian flags fly from the hoods of cars and Russian is spoken everywhere.

Transnistria’s capital is well groomed, with the economy benefiting from cheap Russian gas.
The Dniester River in Tiraspol, which separates Transnistria from the government-controlled part of Moldova.

But behind all of this, some Transnistrians say, is a devious Russian hand. The economy is tightly controlled by pro-Kremlin elites and not delivering for many people. Countless young people have left for work in Europe. With war waging nearby, more are fleeing.

“There is no freedom of speech or freedom of thought,” said one young woman, Rina, who did not want to reveal her full name for fear of reprisals. “It makes you feel like you live in a jail. Or in a tower, with a dragon outside.”

Still, most of the Transnistrians recently interviewed seemed proud of their Transnistrian identity and pro-Russia, but not blindly so.

“I think the outside world has the wrong impression of us,” said Edward Volsky, a user-experience designer who was on his way one recent evening to see “Doctor Strange in the Multiverse of Madness” at a cinema in Tiraspol. “We have the same clothes as you and we have the same devices. We are modern. Just look around.”

In front of him, a young couple sat at a sidewalk cafe in the waning sunshine eating burgers and sipping beer. Nearby, kids wheeled around on rollerblades.

Maybe it was the spotty cell service. Maybe it had something to do with life in a Soviet enclave. But many people in Tiraspol that day seemed less glued to their phones and, despite the sandbags and checkpoints, unusually friendly to outsiders.

When asked who he blamed for starting the war, Mr. Volsky, who spoke perfect English, said: “War is not the way to solve problems these days. I wasn’t there. I cannot judge them.”

But, he was quick to add, “Russia has done so much for us.”

The Memoir That Exposed a Family’s Secrets. And a Society’s.

In Madison Cawthorn’s District, Strong Opinions of Him, For and Against

Navalny to the Russian Opposition: ‘Be Discouraged, a Little Bit’

Shaun White goes for gold in his last Olympic event.