ATLANTA — The women on the Princeton University swim team spoke of collective frustration edging into anger. They had watched Lia Thomas, a transgender woman who swam forthe University of Pennsylvania, win meet after meet, beating Olympians and breaking records.

On Jan. 9, the team met with Robin Harris, executive director of the Ivy League athletic conference.

The swimmers, several of whom described the private meeting on condition of anonymity, detailed the biological advantages possessed by transgender female athletes. To ignore these, they said, “was to undermine a half-century fight for female equality in sport.”

Ms. Harris had already declared her support for transgender athletes and denounced transphobia. In an interview, she said that she had replied that she would not change rules in midseason. “Somehow,” a swimmer recalled, “the question of women in sport has become a culture war.” 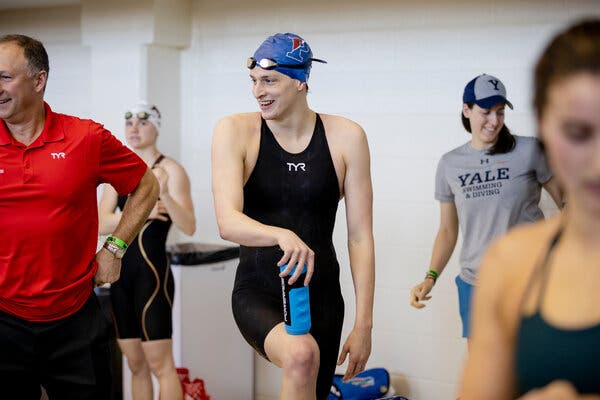 Lia Thomas told Sports Illustrated: “I’m not a man. I’m a woman, so I belong on the women’s team.”Credit…David Walter Banks for The New York Times

Although the number of transgender athletes on top teams is small — a precise count is elusive as no major athletic association collects such data — disagreements are profound. They center on science, fairness and inclusiveness, and cut to the core of distinctions between gender identity and biological sex.

Echoes of those debates ripple outward from pools to weight lifting rooms and tracks, to cycling courses and rugby pitches, and to the Olympics, where officials face a fateful decision on how wide to open the door to transgender women.

The American Civil Liberties Union offers a counterpoint. “It’s not a women’s sport if it doesn’t include ALL women athletes,” the group tweeted. “Lia Thomas belongs on the Penn swimming and diving team.”

The rancor stiflesdialogue. At meets, Ms. Thomashas been met by stony silence and muffled boos. College female athletes who speak of frustration and competitive disadvantage are labeled by some trans activists as transphobes and bigots, and are reluctant to talk for fear of being attacked.

Ms. Thomas herself has chosen silence. In March, afterwinning the 500-yard freestyle in the N.C.A.A. women’s championship in Atlanta, she skipped a news conference. She has of late spoken only to Sports Illustrated, saying, “I’m not a man. I’m a woman, so I belong on the women’s team.”

Even nomenclature is contentious. Descriptive phrases such as “biological woman” and “biological man” might be seen as central to discussing differences in performance. Many trans rights activists say such expressions are transphobic and insist biology and gender identity are largely social constructs.

Some trans activists try to silence critics, whom they derisively call TERFs, which stands for trans-exclusionary radical feminists. A spokeswoman for a gay rights group urged a reporter not to “platform” — that is not to quote — those she said held objectionable views, including Martina Navratilova, the retired tennis legend, a champion of liberal and lesbian causes. Ms. Navratilova argues that transgender female athletes possess insurmountable biological advantages.

“So I’m a ‘TERF’ — OK, that’s the way you want to go?” Ms. Navratilova said in response. “I played against taller women, I played against stronger women, and I beat them all. But if I faced the male equivalent of Lia in tennis, that’s biology. I would have had no shot. And I would have been livid.”

Formerallies are split so bitterly as to make reconciliation a distant prospect. Half of Ms. Thomas’s University of Pennsylvania team sent a letter to the school, released by a lawyer, saying the swimmer had “an unfair advantage.” Brooke Forde, an Olympic silver medalist with Stanford, however, supported Ms. Thomas. “Social change is always a slow and difficult process, and we rarely get it correct right away,” she stated.

The landmark gender equality legislation, which was signed into law in 1972, transformed women’s access to education, sports and much more.

Not long afterward, a Princeton eating club barred a female swimmer from joining, saying her “transphobia” might bring it disrepute, according to a Princeton swimmer.

Finally, inescapably, America’s hyperpartisan politics has electrified this debate. Librarians have been told to remove books with transgender themes from shelves. And Republican-dominated legislatures in 18 states have introduced restrictions on transgender participation in public school sports in recent years, according to data from the Human Rights Campaign, an L.G.B.T.Q. advocacy group.

In Texas, Gov. Greg Abbott demanded agencies investigate parents and doctors who assist children in transitioning, which he termed “child abuse.” In Florida, Gov. Ron DeSantis said he would “reject lies” and refused to recognize Ms. Thomas as the winner of the 500-yard freestyle championship.

Governor DeSantis’s declaration carried no legal power. But it underlined that a difficult conversation is near lost to the shouting.

The Debate Over the Science

Michael J. Joyner, a doctor at the Mayo Clinic in Rochester, Minn., studies the physiology of male and female athletes. He sees in competitive swimming a petri dish. It is a century old, and the sexes follow similar practice and nutrition regimens.

Since prepubescent girls grow faster than boys, they have a competitive advantage early on. Puberty washes away that advantage. “You see the divergence immediately as the testosterone surges into the boys,” Dr. Joyner said. “There are dramatic differences in performances.”

The records for elite adult male swimmers are on average 10 percent to 12 percent faster than the records of elite female swimmers, an advantage that has held for decades.

Little mystery attends to this. Beginning in the womb, men are bathed in testosterone and puberty accelerates that. Men on average have broader shoulders, bigger hands and longer torsos, and greater lung and heart capacity. Muscles are denser.

“There are social aspects to sport, but physiology and biology underpin it,” Dr. Joyner noted. “Testosterone is the 800-pound gorilla.”

When a male athlete transitions to female, the National Collegiate Athletic Association, which governs college sports, requires a year of hormone-suppressing therapy to bring down testosterone levels. The N.C.A.A. put this in place to diminish the inherent biological advantage held by those born male.

But peer reviewed studies show that even after testosterone suppression, top trans women retain a substantial edge when racing against top biological women.

When Ms. Thomas entered women’s meets, she rose substantially in national rankings. Among men, she had

Tags
She Sport That Trans Transgender

School Counselors on How to Help Students Recover From Pandemic Stress

Republicans and Democrats Begin to Sharply Diverge on Crime