SACRAMENTO — On the highway over the Teton Pass in Wyoming, avalanches have been threatening motorists since the 1960s. In Washington and Oregon, drivers live with the daily awareness that, in a major earthquake, the bridge between Vancouver and Portland will probably collapse. In California, residents are increasingly at the mercy of out-of-control wildfires and megadroughts — and their stratospheric costs.

America’s to-do list has been growing for years, since well before President Biden and a bipartisan committee in Congress agreed this year to a historic upgrade of the nation’s aging infrastructure. On Friday, the measure — held up for months amid negotiations over some $2 trillion in other spending — finally passed.

“This is a game changer,” said Mark Poloncarz, the county executive in New York’s Erie County. “Right off the bat, I have somewhere around $150 million in capital projects we could move, from bringing our wastewater treatment system into the 20th century to smaller bridges, some of which are 100 years old.”

Mark Weitenbeck, treasurer of the Wisconsin Association of Railroad Passengers and a retiree from suburban Milwaukee, celebrated the potential expansion of rail service: “While we have been doing nothing, the Chinese have been building 20,000 miles of high-speed rail line.”

Gov. Gavin Newsom of California said in a statement: “President Biden understands the critical need to build a climate-resilient future.” He added that the new funding will “bolster our clean transportation infrastructure, help mitigate some of the worst impacts of climate change, and accelerate new projects that will create thousands of jobs.”

With nearly $600 billion in new federal aid to improve highways, bridges, dams, public transit, rail, ports, airports, water quality and broadband over 10 years, the legislation is a once-in-a-generation chance to overhaul the nation’s public works system. And it offers a rare opportunity for states that for decades have been forced to balance huge short-term backlogs of repairs and upgrades against larger, longer-term projects and needs.

Some $110 billion will be allotted to roads, bridges and other major surface transportation projects. Another $66 billion will go to passenger and freight rail, including enough money to eliminate Amtrak’s maintenance backlog. Yet another $39 billion will modernize public transit, and $11 billion more will be set aside for transportation safety, including programs to reduce fatalities among pedestrians and cyclists. 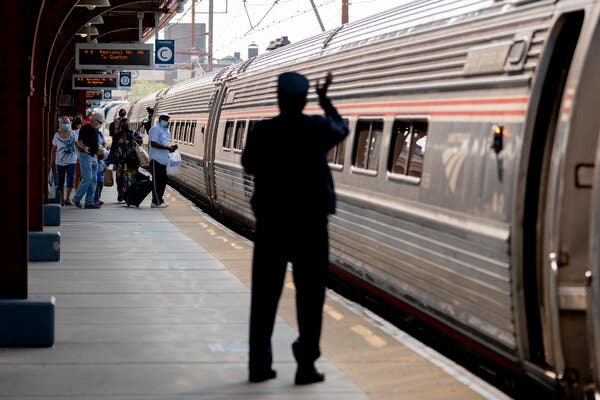 The bill includes enough money for passenger railways that it could eliminate Amtrak’s backlog of maintenance.Credit…Stefani Reynolds for The New York Times

Californians have eagerly anticipated an initiative to build a nationwide network of electric vehicle chargers. So far, even electric vehicles with a long range lack the power to complete a nonstop trip between San Francisco and Los Angeles.Credit…Kelsey McClellan for The New York Times

Broadband systems will get a $65 billion infusion, as will investments to rebuild the electricity grid to refurbish power lines and accommodate renewable energy sources. A $55 billion pool of funds would expand access to clean drinking water. Some $25 billion would go to airports and $17 billion to ports.

Government agencies will determine which projects are funded, but some state priorities were written into the bill during negotiations.

For example, several provisions benefit Alaska, whose Senator Lisa Murkowski, a Republican, was a core member of the bipartisan group of senators who helped hammer out the legislation. Included in the bill is $250 million for a pilot program to develop an electric or low-emitting ferry that would almost certainly go to her state, which has the most miles of marine highway.

Another $1 billion program will pay for a ferry system to reach rural communities such as those in Alaska; the bill allows it to be operated and maintained with federal highway dollars. And other parts of the bill will pay to fix more than 140 bridges, along with more than 300 miles of the highway that stretches across Alaska’s border and into Canada.

West Virginia’s senators, Joe Manchin III, a Democrat, and Shelley Moore Capito, a Republican, also helped draft pieces of the legislation, which includes a $2 billion rural grant program expected to direct funding toward the Appalachian highway system. A stretch of that system, Corridor H — intended to connect Interstate 79 in north-central West Virginia to Interstate 81 in Virginia — has gone unfinished for more than a half-century, but will now get a jump start. The bill also pumps more than $11 billion into a program to clean up toxic leaks from abandoned coal mines, an undertaking estimated to cost at least $2 billion in West Virginia alone.

Mostly, however, the legislation will address public works challenges that have long confounded the political and financial ability of states to address them. Experts predicted it will reshape priorities across the country and boost critical projects.

The bill includes a $1 billion program to pay for a ferry system that can reach rural communities such as those in Alaska.Credit…Christopher Miller for The New York Times
Broadband service will get a boost, as will investments to rebuild the electricity grid to refurbish power lines and accommodate renewable energy sources.Credit…Tamir Kalifa for The New York Times

New Jersey, for example, could tap the new funds to help construct the proposed Gateway Tunnel, easing chronic congestion on the train route that links the state’s population centers to New York. Nearly a decade after Hurricane Sandy flooded the tunnel to New York, leaving structural damage, progress has stalled amid estimates of up to $13 billion to complete repairs.

Along the Gulf Coast, Louisiana officials are eyeing the money to help speed a long-studied passenger rail route between Baton Rouge and New Orleans. In the Pacific Northwest, where the Interstate 5 bridge connecting Oregon and Washington over the Columbia River is at risk of collapsing in a major earthquake, the spending could help settle years of political disagreement and pay for a new, more resilient structure with space for bicycle lanes and pedestrians.

In Michigan, the bill will infuse a record $1 billion into a decade-old program to restore and protect the Great Lakes, where drinking water and wildlife have been compromised by pollution. In Wyoming, where the threat of avalanches annually shuts down Wyoming Highway 22 through the mountains, impeding commercial traffic, it could help fund a tunnel through the Teton Pass.

The legislation also offers a critical lifeline to states and cities struggling to curb greenhouse gas pollution in the face of the escalating disruptions from climate change. In the Northeast, $7.5 billion in funding for zero- and low-emission buses and ferries could help Connecticut and New Jersey to electrify municipal bus fleets. A loan program in the bill also will help local governments in states like Michigan set up projects to reduce the risk and damage from extreme flooding and eroding shorelines.

Other parts of the legislation will address longstanding equity and civic design issues created by old freeway projects, which split many cities, leveled homes and historic landmarks and worsened car dependence and segregation. In Minnesota, it could advance a proposed revamping of the I-94 corridor between St. Paul and Minneapolis, reconnecting neighborhoods that were cut off from one another in the 1960s. And in Connecticut, it could boost projects to help reunite sections of Hartford and East Hartford that were fractured more than 60 years ago by interstates.

Few states, however, are likely to feel the measure’s impact as widely as California, where 40 million people have come to rely on freeways, aqueducts, sea walls, dams and other feats of engineering to maintain their way of life.

A pot of more than $8 billion for Western water projects, for instance, includes billions for water recycling systems and groundwater storage, critical to California’s conservation efforts. More funding in the bill will help upgrade aging dams and canals and perhaps underwrite desalination projects.

Disaster funds in the measure will help mitigate the danger and impact of wildfires and other natural disasters, allowing the state, for example, to bury power lines in rural areas where sparks from old equipment have set off some of California’s most destructive infernos. Also on tap will be federal funding to bring the pay of federal wildland firefighters into parity with the state’s far better paid fire crews, addressing critical shortages of experienced crews in a state where most of the forested wilderness is on federal land.

The new federal money could deliver a boost, as well, to the high-speed rail line that California has been trying for a decade to construct between its largest cities and its rural Central Valley. In recent years, the priority has been merely to complete an electrified route between Merced and Bakersfield. But with additional funding, state officials say they could expand to the Bay Area and the Los Angeles Basin, connecting one of the state’s most economically depressed regions to major cities and better-paying jobs.

One small part of the measure, however, has been especially anticipated in California: a $7.5 billion initiative to build a nationwide network of chargers for electric vehicles. Although 40 percent of the electric vehicles in the nation are sold in California, sales still lag in part because car buyers fear they will be unable to easily recharge on long car trips. So far, even electric vehicles with long ranges — Teslas, for instance — lack the power to make the 400-mile journey between San Francisco and Los Angeles without stopping for a charge.

A Turtle, a Pool and the Fight to Save Puerto Rico’s Beaches 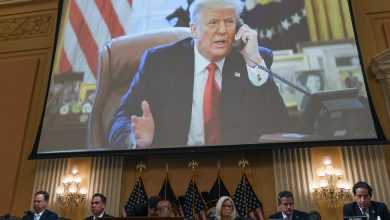 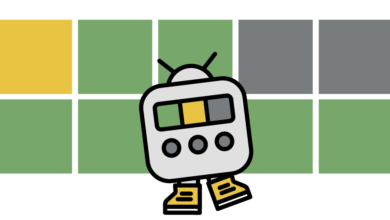 WordleBot’s Word Switch: ‘Slate’ Is Out, and ‘Crane’ Is Back In

Pfizer says its vaccine is safe for children 5 to 11. Will parents buy in? 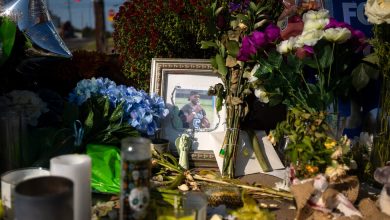