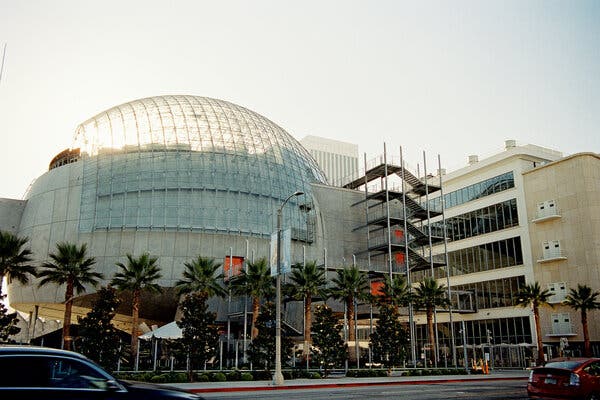 The Academy of Motion Picture Arts and Sciences is, after many delays and cost overruns, finally opening its museum dedicated to film history.Credit…Justin Chung for The New York Times

A museum in Amsterdam is contemptuously known as the Bathtub because it resembles one. Berliners refer to their city’s architecturally adventurous arts center as the Pregnant Oyster. Unfortunate nicknames for a prominent museum in France include the Smurf House.

And now Los Angeles has … the Death Star?

The long-delayed Academy Museum of Motion Pictures will finally open today on Wilshire Boulevard. It’s a seven-story, $484 million temple to cinema that mixes cerebral (a lavish Hayao Miyazaki retrospective) with showbiz (a high-tech simulation of what it feels like to accept an Oscar). Adult tickets cost $25. The Oscars Experience is $15 extra. Entry-time reservations are required.

If nothing else, Angelenos now have somewhere to take Hollywood-fascinated visitors that does not involve the dreaded Hollywood & Highland shopping mall or the sticky, stinky Walk of Fame.

Renzo Piano, the Italian architect who designed the Academy Museum, has one plea, however. It involves a nickname for the complex, which includes a 26-million-pound concrete-and-glass spherical building. In the eyes of many beholders, the globe resembles Darth Vader’s planet-destroying space station from “Star Wars.”

“I have one thing to ask you, a big favor,” Piano said at a media event last week: Don’t call it the Death Star. “It is a soap bubble.” He continued: “Yes, a soap bubble! It is the now and perhaps the fragile future. But this one does not burst. It lasts and lasts.”

The Los Angeles Times, appraising the sphere in the planning stage in 2014 and in completion this month, unfavorably likened it to a “giant albino Pac-Man” and favorably to “a giant eyeball.”

Piano, 84, did not seem to appreciate either sobriquet, although he was more hospitable to a suggestion by Tom Hanks, who helped raise funds for the museum and also spoke at the media event. How about Magic Lantern, a nod to antique image projectors? “That’s what this building looks like to me when I drive by,” Hanks said.

But the architect was not going quietly.

“A dirigible? That’s OK,” Piano said, with a hint of exhaustion. “Call it a Zeppelin to take you to a different world.”

He paused for emphasis. “Or why not a soap bubble?”

Brooks Barnes is a reporter for The New York Times who covers Hollywood.

California made a strong showing in this year’s MacArthur Foundation awards, with six of the 25 grant recipients coming from the Golden State.

Unusually, two of this year’s fellows are married — the filmmakers Cristina Ibarra and Alex Rivera, who live in Pasadena.

The couple were evaluated and selected separately but informed together, Cecilia Conrad, managing director of the program, told The Times.

“It was a lot of fun to call them,” Conrad said.

Soumya Karlamangla, Steven Moity and Mariel Wamsley contributed to California Today. You can reach the team at CAtoday@nytimes.com. 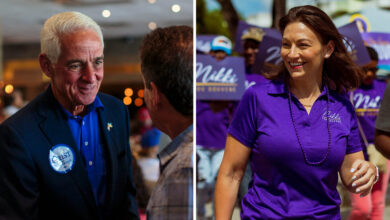