It doesn’t take long after entering the St. Regis Mohawk reservation to see a glimpse of the future of marijuana sales in the state of New York.

The reservation — a sovereign tribal land in the eyes of the government —currently holds the distinction of hosting New York’s only overt outlets for recreational sales of the drug: nearly a dozen dispensaries offering an array of joints, gummies, edibles and tinctures, which imbue this far-flung, northern-border territory with a shaggy, entrepreneurial energy.

In front of one dispensary, Best Budz, a smiling, neon-green wavy-tube monster welcomes customers to a salesroom housed in a shipping container; another, Six Bears, offers 24-hour-a-day sales, complete with a drive-through window and a work-in-progress “V.I.P. lounge.”

All of which is legal, according to the state, if exceedingly remote: The nearest big city is Montreal, about 70 miles to the northeast, and even visitors from upstate cities like Syracuse face a drive of three hours or more.

But while New York City customers might prefer closer locales in Massachusetts (where recreational marijuana sales began in 2018), the proprietors of the reservation’s new weed dispensaries say they are doing a steady business, capitalizing on delays from state leaders who have been slow to adopt regulations to govern the adult-use sale of the drug. Possession and use of marijuana in limited amounts for recreational use became legal in New York in late March.

As such, the reservation’s dispensariesare seemingly getting a jump-start on what is projected to be a $4 billion industry in New York, as well as continuing a long tradition of using products like tobacco and gasoline — steady moneymakers for the tribe — to create jobs and income.

“This land has a lot to do with being a place to do commerce on,” said William Roger Jock, a member of the St. Regis tribe and a partner in Good Leaf Dispensary. “And I have the right to do what I see fit for my people.”

Good Leaf was the first dispensary to open here, shortly after New York State’s legalization of recreational marijuana, Mr. Jock said. It sells its wares out of a new storefront on Route 37, a country highway west of Plattsburgh, even though it had no tribal license to operate. 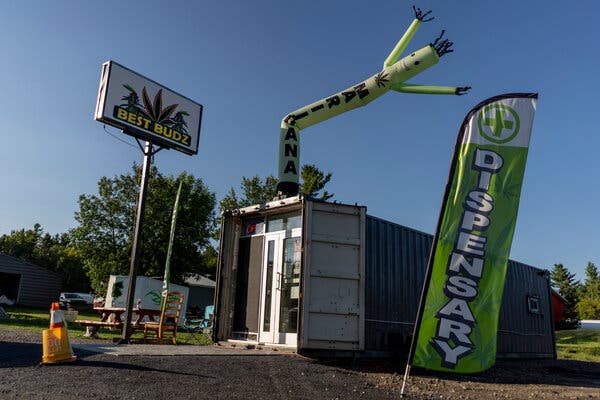 Best Budz is one of a dozen recreational marijuana shops that have sprung up on the St. Regis Mohawk Reservation this year.Credit…Libby March for The New York Times

Indeed, not everyone here approves of the new businesses: The St. Regis tribal government maintains that the dispensaries are operating outside the laws of the reservation and robbing the tribe of critical revenue from licensing and sales fees, which underwrite essential services, including education, health care and public safety.

The internal strife on the reservation has grown so intense that tribal leaders have sued in tribal court, after giving the rogue dispensaries 48 hours to close or face being disqualified from any future licensure. The dispensaries have defiantly refused: More stores have opened, and many pot shops on the reservation are now posting signs on their doors warning that tribal compliance officers are not welcome and will be charged with trespassing.

Such posturing has done little to dissipate tension between tribal officials and the dispensaries.

“They’re thinking about themselves and not the overall community,” said Chief Ronald LaFrance Jr., one of three St. Regis chiefs, adding, “And that’s my concern, the lost revenue for the tribe.”

Marijuana is still illegal in the eyes of the U.S. government, but it has been legalized for adult recreational use in 18 states, according to the Drug Policy Alliance, and for medical use in more than 30. And in recent years, dispensaries have opened on tribal lands around the country, in states including Nevada, Washington and Michigan; in New York, the Shinnecock on Long Island are taking steps to get into the market, as are the Seneca on the state’s western flank.

For their part, the New York State authorities seem to be taking a hands-off approach to the early entrepreneurs on the St. Regis reservation, noting that such businesses are legal on federally recognized, sovereign tribal land.

With state regulations still far from being codified, and the tribal government unable thus far to stop the shops’ spread, the St. Regis dispensaries are operating both in a legal gray zone and with a sense of urgency seemingly not felt until recently in Albany.

“Everyone is scrambling to become a success overnight,” said Charles Kader, a tribe member and local writer who is a friend of Mr. Jock’s.

A rolling greensward dissected by the St. Lawrence, St. Regis and Raquette Rivers, the lands here are known by tribal members as Akwesasne. Wildlife still thrives here — Akwesasne means “the land where the partridge drums” — and the territory straddles the U.S.-Canada border, with overlapping jurisdictions, including tribal law enforcement. Modest homes and abandoned businesses mix, as do Christian and sacred tribal sites.

The dispute over marijuana comes after a painful economic period on the reservation because of the coronavirus pandemic, which caused one of the territory’s biggest employers — the Akwesasne Mohawk Casino Resort — to close for more than five months. Brendan White, a tribal spokesman, said that the direct loss to the tribe — which receives profit contributions from the casino — exceeded $30 million, though federal stimulus dollars helped. Unemployment on the reservation soared to nearly 50 percent, he said.

Even after the casino reopened in August 2020, gaming was slow to recover, with border restrictions on Canadian visitors, who make up a significant portion of its gamblers. On a recent visit, the casino’s bars and bingo hall were closed, its gaming floor only about half full.

And Covid-19 continues to shadow the community, with more than a dozen deaths of members living on the reservation’s lands, north and south of the border, where about 15,500 people live in total, according to Mr. White. A sign near tribal headquarters urges people to get vaccinated, noting a vaccination rate of only about 50 percent.

Beyond fees and revenue, the conflict over the dispensaries also speaks to a longstanding tension on the reservation between those who adhere to the recognized tribal government and those who look to other authorities.

The St. Regis tribal council formally legalized marijuana in June, propagating a series of rules and regulations to license the cultivation, processing and sale of the drug, including an annual $5,000 fee for retailers as well as per-gram and per-ounce fees on various marijuana products.

But Mr. Jock says that his dispensary and others are not subject to the council’s rules. Instead, he says, they are sanctioned by traditional “long houses” on the reservation, which once served as dwellings and now act as a type of governance body for three St. Regis clans: Bear, Wolf and Turtle.

“Our old way of governance is still intact, the way of the long house,” said Mr. Jock, who says that his long house — his family is Bear clan — has propagated guidelines for testing of products, and other rules for the new businesses.

Tribal officials seem skeptical of such promises of rigorous regulation. “We want our consumers, when they come into Akwesasne, to know that they have a safe, tested product,” said Michael Conners, another tribal chief. “And that’s not something we can guarantee unless we have tribally regulated licenses.”

Despite their sometimes makeshift exteriors, fashioned out of prefabricated buildings and sheds, most dispensaries present their products — including already-rolled joints — atop and under gleaming glass counters. Customers find computerized menus listing prices, assisted by usually beaming salespeople. And construction is underway on a large store, Budders, which locals already compare to an Apple Store.

Shonenrhiio Jock, a “budtender,” stocking merchandise at the Golden Nugget, a marijuana dispensary operating on tribal lands.Credit…Libby March for The New York Times

Mr. Jock himself has also tangled with federal officials before, having been charged in 2012 with running an illegal casino; he was later acquitted, after arguing — similar to now — that he was operating with the permission of the long house and in the economic interests of Akwesasne. (The money-counting room of that abandoned casino, Three Feathers, now houses a new dispensary.)

Canada legalized marijuana in 2018, and several additional dispensaries lie just north of the state highway, along a road that juts into Quebec, despite no formal border crossing.

The clientele for the American-side dispensaries seems to be coming from far and wide, with parking lots peppered with license plates from Pennsylvania and Vermont, as well as with trucks emblazoned with the names of off-reservation businesses.

State leaders seem aware that they have been languorous in their approach to regulation: This month as Gov. Kathy Hochul named two leaders to oversee the state’s marijuana program after months of delays under former Gov. Andrew M. Cuomo, she noted that New York needed “to make up for lost time.” On Wednesday, she named the final two members to the five-person Cannabis Control Board, which will create regulations for cannabis programs.

Mitchell Gibson, who previously worked at the local casino, started working at the Six Bears dispensary about two months ago. The shop has a drive-through and is open 24 hours a day.Credit…Libby March for The New York Times

Even so, tribal officials estimate they could have as much as a two-year jump on New York, and they began accepting applications for retail licenses from tribal members this month. Chief Conners said such licenses — as well as those for processing and cultivating — could be issued in as soon as six to eight weeks.

Some older tribe members, who have seen hard times in the past on the reservation, hail the tribe’s embrace of the drug’s profit potential. “You can make a darn good living,” said Paul Thompson, 77, a former chief, adding, “If it’s an opportunity for the states, it should be an opportunity for our people.”

By a wide margin, members of the tribe, which has slightly more than 16,000 enrolled members, authorized the council to establish rules and regulations to legalize marijuana in a 2019 referendum. And some members — like Lance White, who is starting a new business in the cannabis industry — say the best way forward is not to squabble, but for traditional and modern governments to collaborate “to see true economic growth in Akwesasne.”

Tribal officials also try to downplay the tension. “I think if it’s there, it’s in their own minds,” Chief Beverly Cook said of the dispensary owners.

Likewise, Mr. Jock says that Good Leaf — where a healthy clump of marijuana plants grows around a statue of a Mohawk warrior in the parking lot — is doing well, and that he bears the tribal council no ill will. His dispensary and others have donated money from their sales to support local services, he noted.

“I never wanted it to become a fight,” he said, adding that he feels he’s helping some people — he singled out veterans — deal with the stress of life. “This is a relief valve for them.”

Customers seem to agree. On a recent Friday, Tiffany Barrick, who is 38 and has cancer, said she drove five minutes from her home in nearby Fort Covington to a St. Regis dispensary, rather than more than an hour to a medical marijuana outlet in Plattsburgh.

She didn’t care who was running the facilities; she was just happy that they are open for business.

“I wish it could be more out and around,” she said, holding $40 worth of joints from the dispensary, Native Flower. “But I’m just glad that they have it.”

Days Before Germans Vote, Merkel Is Where She Didn’t Want to Be: On the Stump

That ‘Team Beto’ Fund-Raising Email? It Might Not Be From Beto.

With Climate Deal in Sight, Democrats Turn Hopes on Sinema

The Cause of the Derailed Amtrak Train Remains Unclear

Should Biden Run in 2024? Democratic Whispers of ‘No’ Start to Rise.