REIMAGINING A LEGENDARY interior by a Modernist icon is a test not only of vision but of courage: Are you confident enough to put your mark on a space where greatness once ran wild? That was the challenge for the Lebanese designer Nicolas Moussallem and his French Lebanese studio partner, David Raffoul, both in their early 30s, who were recently asked to recast — and preserve what remained of — a famed Milan apartment known as Casa di Fantasia, created near the Piazza Piemonte in 1952 for a married couple, Mario and Lisetta Lucano, by Giovanni “Gio” Ponti.

Ponti, who created furniture and objects, as well as more than a hundred buildings over 60 years, was among the most prolific design talents ever, mastering styles that ranged from post-World War I-era neo-Classical ceramics and silverware for Christofle to the stark geometries of the 1960 Pirelli Tower in Milan and the 1971 Denver Art Museum; Casa di Fantasia was part of his midcentury exploration of French Surrealism and Italian metaphysics. 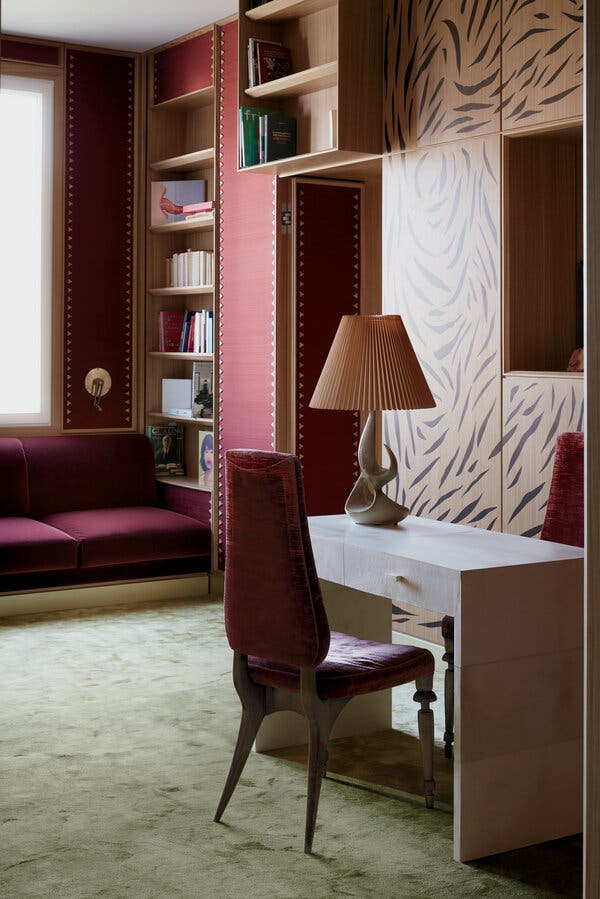 A parchment desk and a custom red velvet sofa in the wood-and-marquetry-paneled office.Credit…Sara Magni

Enlisting several of his regular collaborators, including the artist Piero Fornasetti, the illustrator Edina Altara and the sculptor Fausto Melotti, Ponti manipulated the proportions of the space with a verve reminiscent of the Italian artist Giorgio de Chirico, employing trompe l’oeil techniques and boiserie on many surfaces, transforming the 2,800-square-foot two-bedroom into a minutely detailed, highly cerebral retreat. The walls of the study were overlaid with floor-to-ceiling panels of either Ferrarese burr walnut designed by Ponti or lithographic transfer prints of book-filled shelves by Fornasetti. The contrast created a clever optical illusion; when you looked from the living room toward the bedroom, through doorways and interior windows, it seemed as though the study was covered in burled veneer but, from the opposite direction, it appeared as all Fornasetti prints. The perspective-altering trick was one of several he deployed: In the corridor leading from the entryway — in which a door floats frameless in an expanse of opaline glass — the ceiling slanted upward almost imperceptibly, making whoever was entering the apartment loom larger than they were. Elsewhere, Altara painted colorful mythical figures on verre églomisé chests crafted by Ponti’s longtime master carpenter Giordano Chiesa, and Fornasetti’s diaphanous silk drapes printed with images of hot-air balloons hung along the windows of the living room’s curved walls. “The idea was not to make a real house,” says Salvatore Licitra, 69, Ponti’s grandson and the curator of the architect’s photo archive, “but to make a house that was a fantasy.”

Mario Lucano, who was an electronics executive, is said to have maintained the apartment with Lisetta until the 1960s, when it was sold to an entrepreneur who kept it nearly intact for more than half a century. Then, in 2019, the owner decided to put the interiors up for auction, including panels from the walls, over 30 pieces of hardware and the extraordinary furnishings. The empty shell was sold to an investment banker named Michele Marocchino.

In the dressing room, a Mimmo Jodice photograph and a David/Nicolas sconce on marquetry walls.Credit…Sara Magni
Concrete has replaced the tiling on the bathroom floor, highlighting the original pink bathtub and shower. The painting is by the owner, Michele Marocchino’s, mother, Letizia Chianese.Credit…Sara Magni

A COLLECTOR OF ancient Roman artifacts and Renaissance paintings, Marocchino, 51, initially wasn’t interested in the apartment’s mid-20th-century provenance but, as he learned more about Ponti’s intentions — he tracked down articles about Casa di Fantasia, including one in the archives of Domus, the magazine that Ponti had started in 1928 and largely ran until his death in 1979 — he became dedicated to reincarnating the designer’s spirit. He even briefly considered faithfully restoring the original apartment, perhaps buying back some of what had sold at auction, but decided that would violate Ponti’s ethos of always moving forward.

While visiting Beirut in 2018, Marocchino was taken by a friend to see the studio of Raffoul and Moussallem, called David/Nicolas. They made a deep impression on him though, at the time, he didn’t know he would soon have a project for them. The designers, now both 34, had met in 2006 at the Lebanese Academy of Fine Arts and obtained their master’s degrees from Scuola Politecnica di Design in Milan. Their work, which includes furniture and objects, as well as interiors, has a retro-futuristic look, with natural textures and modern versions of traditional inlays and boiserie. Marocchino found the way they integrated the past into their practice compelling: Their 2019 solo show at the New York outpost of Carpenters Workshop Gallery included a bronze travertine dining table with geometric silvered brass inlays that resemble Egyptian hieroglyphs and, in a Beirut apartment, they installed fluted paneling that complements a curvy 1989 Marie-France fireside chair by the French designer Martin Szekely and a 1977 Vico Magistretti floor lamp with four oversize glass globes.

In the main bedroom, an 18th-century Chinese wallpaper panel and, over the bed, 25 pink paper Carol Rama prints.Credit…Sara Magni

Still, the prospect of taking on such a celebrated space was daunting, especially under the circumstances: In the midst of the project, the 2020 Beirut port explosion left their studio and the city in shambles, leading them to move to Milan. And in Casa di Fantasia, they had found little to build on; only a small portion of the apartment had been left intact, including the ash-paneled entryway, the brass baseboards and a bathroom with original bubble gum pink porcelain fixtures. “Our stress levels were very high,” Moussallem says.

They installed new boiserie, with inlaid fern-shaped scallops resembling brushstrokes or the markings of a mythical jungle cat, in French oak. In place of Fornasetti’s stage-set library, they built bookshelves lined in oxblood silk with a motif of tiny wooden triangles affixed by hand to the border of each fabric panel, evoking the serrated stone details found in the arched doorways of Lebanon’s medieval churches. On one of the shelves are a pair of 1700s reddish marble obelisks in front of a 21st-century Chris Levine holographic portrait of Queen Elizabeth II with her eyes closed; the tableau evokes the porcelain king and queen statuettes by Ponti that sat on a shelf in the original Casa di Fantasia.

In the library, clockwise from top left: a photograph of Queen Elizabeth II by Chris Levine behind two 18th-century marble obelisks; an artist’s book by Michelangelo Pistoletto; a Flemish portrait of Prior Maurice de Chauncy painted in Bruges in 1577; an 18th-century fragment of a painting from the school of Canaletto; and a 1972 lithograph invitation to an Andy Warhol’s exhibition at the Leo Castelli Gallery.Credit…Sara Magni
Ponti designed the door, which opens into a storage room, to appear as if it were floating off its hinges.Credit…Sara Magni

The designers kept the living room relatively minimal to highlight Marocchino’s art, including a huge 16th-century Venetian Mannerist canvas by the artist Giuseppe Amatore, which hangs above a rounded sofa upholstered in a pale wool-and-linen twill. Nearby sits a multilevel stainless-steel-and-glass coffee table by the photographer and designer Willy Rizzo; the floor is covered with a golden yellow silk carpet, in a shade similar to the one Ponti chose. In the main bedroom hang an 18th-century Chinese hand-painted wall panel and a set of 25 framed sketches on pink paper by the self-taught Turinese artist Carol Rama.

For Moussallem and Raffoul, the home they have created is part of an ongoing dialogue with Ponti. Mindful of the exuberant expression and handcrafted aesthetic of the polymathic designer and his collaborators, it is also defined by their own contemporary restraint. “We had to respect the principles of the house and the vision behind it,” says Moussallem. “Otherwise, it’s just another empty apartment with four walls.”

On the Runway, Money Is the New Sex

The Marines Reluctantly Let a Sikh Officer Wear a Turban. He Says It’s Not Enough.