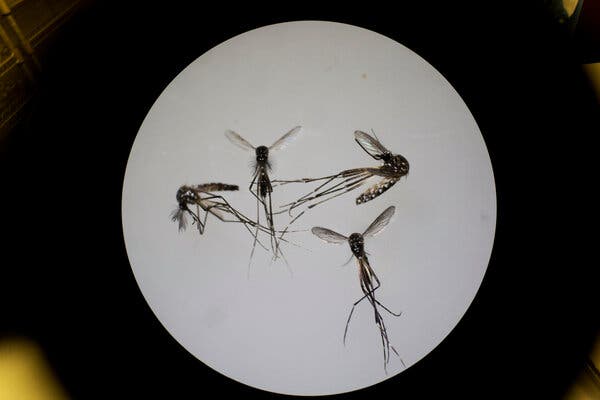 The Aedes aegypti mosquito is an invasive species that has been found across much of California.Credit…Victor J. Blue for The New York Times

When I moved to Los Angeles years ago, I was told by native Angeleno friends that the city without humidity also definitely did not have mosquitoes.

What is that whizzing sound then? The welts on my ankles? My favorite cafe has taken to selling bottles of insect repellent next to the cash register. Were my friends wrong, or should we acknowledge that this winged scourge is part of life in the Golden State?

Since 2011, scientists have tracked an invasive mosquito species in parts of California: the Aedes aegypti. These black-and-white-striped “ankle-biters,” which can transmit dengue fever, Zika virus and yellow fever, have been found up and down the state.

Alec Gerry, a professor of entomology at the University of California, Riverside, said it was not necessarily that the mosquito population had increased in size but rather that the habits of this invasive species were far more noticeable.

The native Culex mosquito tends to emerge at night, preferring to feed on birds, but nonnative mosquitoes have adapted extremely well to life here. They hunt for blood during the daylight hours when people are most active, often going undetected after biting below waistlines. This particular species also has an annoying habit of snacking — aggressively biting a host multiple times in one feed. Laying eggs just above the surface of water, the Aedes aegypti can breed in a bottle cap or the finger holes of a bowling ball. The eggs can lie dormant after drying out for up to a year, hatching once they come in contact with water again.

Levy Sun, communications director for the San Gabriel Valley mosquito and vector control district, told me that longer spells of warm weather and man-made environments featuring lush, tropical vegetation are contributing to the proliferation of this species. Mosquitoes have a hard time regulating their body temperatures, so they often seek relief from the heat in shady yards. If you notice an uptick in bites, it’s probably because they have set up shop nearby.

Mosquito infestations come and go depending on how hospitable you make it for them. “They wash over neighborhoods in waves,” Sun said.

Controlling the mosquito population is extremely tricky, but eliminating all sources of standing water is a good starting point. Use insect repellent if you don’t want to get bitten. Call your local vector control office if you need help finding potential breeding sites. Some counties will send fish that eat mosquito larvae.

California has had native mosquitoes going back to the gold rush days, when malaria tore through populations and had to be eradicated by aggressive mosquito abatement programs. Nonnative mosquito species were introduced to the state gradually through global trade; in 2001, health officials linked an outbreak of Aedes albopictus in Southern California to a shipment of lucky bamboo plants from Taiwan.

The preponderance of these pests should lessen by the end of October, when colder nighttime temperatures affect their life cycles until they reappear again in May. However, it looks likely that the Aedes aegypti will continue to be a scourge on our summers.

Sun, who zaps mosquitoes in his house with an electric racket, said that while efforts should be made to control the population, total eradication was not very likely at this point.

“They survived the dinosaurs and lived until now,” he said.

My colleagues Ryan Mac and Sheera Frenkel wrote about Facebook’s push to defend its public image through a company initiative code-named Project Amplify. Its purpose: to use Facebook’s News Feed to show people positive stories about the social network. Mark Zuckerberg, Facebook’s chief executive, who became intertwined in the 2020 election, also wanted to recast himself as an innovator, according to the article.

For seven years, the Bay Area artist Lynell Jinks transformed the drab paper lunch bags that his children brought to school into works of art featuring portraits of actors, musicians and historical icons. Each bag was returned after serving its purpose and carefully kept in a collection that eventually numbered over 800 works.

The bags, which earned the praise of President Barack Obama, are now featured in a new book, “School Lunch: Unpacking Our Shared Stories” by Lucy Schaeffer.

Jinks told The Mercury News that he decorated the bags to share his love of art with his children. “I want them to look back at their childhood and remember what we did together,” he said.

Mariel Wamsley and Soumya Karlamangla contributed to California Today. You can reach the team at CAtoday@nytimes.com.

What Will It Take for Electric Vehicles to Create Jobs, Not Cut Them?

What to Know About the Houston Astroworld Tragedy 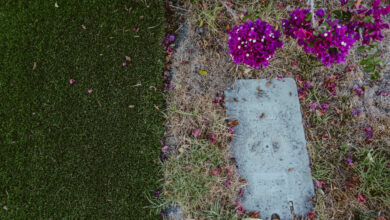 In Los Angeles, the Grass Isn’t Always Greener This Year