WASHINGTON — The Biden administration warned Arizona on Tuesday that it could lose some of its state and local recovery funds because it has been using money meant to combat the pandemic to undercut mask requirements in schools.

In a letter to Arizona’s Republican governor, Doug Ducey, the Treasury Department said the state was misusing the money, which was intended to help local governments bolster public health measures. As part of the $1.9 trillion pandemic aid package that Congress passed earlier this year, states and cities were awarded $350 billion of relief money that they could use for a wide variety of purposes.

Arizona was awarded $4.2 billion from the fund and has received about half of that so far.

Arizona’s Republican-controlled legislature banned school mask mandates earlier this year, but some school districts imposed them anyway. In August, Mr. Ducey announced that he was rolling out two education programs intended to undercut such requirements.

A $163 million program provides up to $1,800 in additional funding per pupil in public and charter schools. However, these schools must be “following all state laws” and open for in-person instruction. Schools that required masks would not be eligible.

A separate $10 million program funds vouchers worth up to $7,000 to help poor families leave districts that require face coverings or impose other Covid-related “constraints.”

“Parents and families applying for program funding must demonstrate that their current school is isolating, quarantining, or subjecting children to physical Covid-19 constraints in schools, such as requiring the use of masks or providing preferential treatment to vaccinated students,” Mr. Ducey’s office said in August.

The Treasury Department is giving Mr. Ducey 30 days to change or end the programs, otherwise the federal funds invested in them could be clawed back.

A spokesman for Arizona’s attorney general did not immediately have a comment.

The Biden administration has given states broad discretion over how they can use the recovery funds; however, there are some restrictions.

Arizona is one of several Republican-led states that have sued Treasury over a rule that prevents states from using the relief money to subsidize tax cuts.

The letter to Mr. Ducey was the first warning that the Treasury Department has sent to a state over what it views as misuse of funds.

States around the country have been locked in legal battles over mask mandates or bans against mask requirements in schools.

A superior court judge struck down Arizona’s ban on school mask mandates last month. The state’s Supreme Court agreed last week to hear the case, leaving the status of the law in limbo until later this year.

Biden Is Taking a Page Out of Trump’s Immigration Playbook

What to Expect at the State Dinner Table: Lobster, Wine and a Reset Button 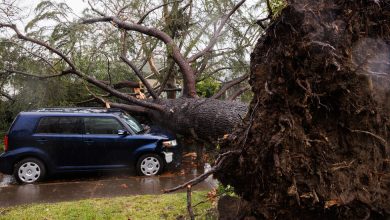