What happened to normal politics? I’ve spent the past five years commuting between two centuries, trying to find out.

As a curator of political history at the Smithsonian, I have attended protests and primaries, talked politics at Bernie Sanders rallies and with armed Ohio militiamen. Again and again, 21st-century Americans wonder at a democracy that looks nothing like the one they grew up with.

I’ve asked the 19th century the same question. Heading into the Smithsonian’s secure collections, past recently collected riot shields and tiki torches, I’ve dug into the evidence of a similar crisis in the late 1800s. Ballots from stolen elections. Paramilitary uniforms from midnight rallies. Diaries and letters, stored elsewhere, of senators and saloonkeepers and seamstresses, all asking: Is democracy a failure?

These artifacts suggest that we’re not posing the right question today. If we want to understand what happened to 20th-century politics, we need to stop considering it standard. We need to look deeper into our past and ask how we got normal politics to begin with.

The answer is that we had to fight for them. From the 1860s through 1900, America was embroiled in a generation-long, culturewide war over democracy, fought through the loudest, roughest, closest elections in our history. An age of acrimony when engaged, enraged participation came to seem less like a “perversion of traditional American institutions,” as one memoirist observed, and more like “their normal operation.”

The partisan combat of that era politicized race, class and religion but often came down to a fundamental debate about behavior. Howshould Americans participate in their democracy? What was out of bounds? Were fraud, violence and voter suppression the result of bad actors, or were there certain dangerous tendencies inherent in the very idea of self-government? Was reform even possible?

Ultimately, Americans decided to simmer down. After 1900, a movement of well-to-do reformers invented a style of politics, a Great Quieting aiming for what The Los Angeles Times called “more thinking and less shouting.” But “less shouting” also meant less turnout, less participation, less of a voice for working people. “Normal” politics was invented to calm our democracy the last time it broke.

Over a century of relative peace, politically speaking, this model came to seem standard, but our embattled norms are really the cease-fire terms of a forgotten war.

This period from the Civil War to World War I is often quickly explained with history textbook abstractions like “industrialization,” “urbanization” and “immigration,” but those big social forces had intimate effects on Americans. Living in a time of incredible disruption, instability and inequality pushed unsteady citizens into partisan combat. Nervous people make nasty politics, and the churn of Gilded Age life left millions feeling cut loose and unprotected. During this era, Americans saw weaker family ties, had fewer communal institutions and spent more time spent alone. Though we associate the Gilded Age with packed factories and tenements, loneliness and isolation were driving social and political forces in this shaken nation. Americans “had to cling to something,” observed the writer Walter Weyl, and in the absence of their old folk customs or local institutions, “the temptation to cling to party became ruthless.”

The parties were willing to oblige. The only thing Gilded Age life seemed to want from struggling Americans was their hard labor. But the Democratic and Republican Parties wanted their voices at rallies, their boots on the cobblestones, their stomachs at barbecues, their fists at riots and their votes on Election Day. Richard Croker, a Tammany Hall boss — once jailed for an Election Day stabbing — called his machine America’s “great digestive apparatus,” capable of converting lonely immigrants into active citizens.

Likewise, people needed the parties. Some had concrete goals, like the Black politician and Philadelphia barber Isaiah C. Wears, who explained that he did not love the Republican Party — it was merely the most useful tool in his community, the “knife which has the sharpest edge and does my cutting.” Others needed something more emotional. Many sought the community that came from marching together or sharing the party’s lager or guffawing at the same political cartoons. And because participation was so social and so saturating, even the women, young people and minorities denied the right to vote could still feel palpably engaged without ever casting a ballot.

But their efforts resolved little. Voter turnouts climbed higher than in any other period in American history, and the results were closer than ever, too, but neither party won lasting mandates or addressed systemic problems. Every few years, some bold new movement pointed to the issues Americans were not addressing — inequality, immigration, white supremacy, monopoly — only to be laughed off as cranks by swelling multitudes that preferred parties that, as one Tammany operative said, did not “trouble them with political arguments.”

Even those on the front lines of the era’s violent politics wondered what it was all for. One African American reverend pointedly asked Black Republicans fighting to hold on to voting rights, “With all your speaking, organizing, parading in the streets, ballyhooing, voting and sometimes fighting, what do you get?”

The more demands Americans put on their democracy, the less they got. By centering politics on what The Atlantic Monthly called “the theater, the opera, the baseball game, the intellectual gymnasium, almost the church of the people,” by making it the locus for a culture war, a race war and a class war, by asking it to provide public entertainment and small talk and family bonding, progress became impossible. Little changed because so many were participating, not in spite of that.

“Government by party is not a means of settling things,” as the muckraker Henry Demarest Lloyd said. “It is the best of devices for keeping them unsettled.”

Over the years, politics alienated widening circles. On the right, America’s old aristocrats — like the revered Boston historian Francis Parkman — hissed that the very idea of majority rule was a scheme to steal power from “superior to inferior types of men.” On the left, Populists and socialists denounced political machines that had hoodwinked working-class voters. These populations would never agree on what should come next but had a consensus on what had to end.

After 1890 or so, a new alliance began working toward the secret cause of making politics so dry and quiet that fewer of those “inferior types” wanted to participate, often explicitly viewing mass turnout as harmful. Many cities, scarred by the rising labor movement, banned public rallies without permits, hoping to shove public political expressions back into “the private home,” as the Republican National Convention chairman put it. They closed saloons on Election Day, shuttering those key working-class political hubs. And they replaced public ballot boxes with private voting booths, turning polling places from vibrant, violent gatherings into a confessional box.

Though each change felt small, taken together, they amounted to a revolution in political labor. Campaign work once done in the streets by many ordinary volunteers was now done in private by a few paid professionals.

What came next was predictable. Voter turnout crashed by nearly a third in presidential elections from the 1890s through the 1920s, falling from roughly 80 percent to under 50 percent. Voting decreased most among working-class, young, immigrant and Black citizens (even in Northern states where African Americans maintained the ability to vote). For the first time, wealth and education correlated with turnout. To this day, class remains the largest determiner of participation, above race or age.

There were some benefits to these quieter elections. Political violence became rare and shocking. Between 1859 and 1905, one congressman was murdered every seven years, and three presidents were killed in just 36 years. In the subsequent century, the nation suffered one presidential assassination and the murder of a congressman every 25 years. In this cooler political environment, lawmakers were finally able to pass long-delayed Progressive reforms. Women’s suffrage, federal protections for workers, direct elections of senators, progressive income taxes and regulations on industry, transportation, food, and drugs all finally passed — after decades of failure — once electoral politics quieted. American lives improved more in this period than in any other, and yet it all coincided with a crash in participation.

But this early-20th-century democracy was also more distant from ordinary life. These are the years when it became impolite to talk politics at the dinner table, when growing numbers struggled to distinguish between the parties, when incumbent politicians began to hold on to office for decades. The number of seats in Congress, which had always expanded with the population, permanently froze in 1911 at 435, even though our population has tripled since then.

And this is the same ugly era when Southern states began an onslaught on the million Black voters who participated in many elections during Reconstruction. States from Mississippi to Virginia passed repressive new constitutions between 1890 and 1910, essentially killing democratic participation in much of the South. Though that was far more extreme, all these changes grew from a new climate of restraint that quieted politics nationwide in the new century.

Political objects can tell the story of this change. From 1860 to 1900, parties held torch-lit midnight marches to rally the faithful. In 1900, after a sweltering Republican convention in Philadelphia where participants wore straw hats, the jaunty boater became the new icon of a cooler approach to politics. A glance at political cartoons from 1920 or 1960 or even 2000 finds caricatures still wearing boaters — a style far removed from the torch-lit democracy of the 1800s.

The Smithsonian has steel drawers full of such boaters (made from straw, plastic and Wisconsin cheesehead foam). My colleagues and I have spent the past few years shuttling between these collections and contemporary political events, trying to identify objects that might embody the change we’ve witnessed in our democracy, that might go behind museum glass in a century to help explain 2016 or 2021. And wondering what these eras might say to each other. When it comes to electoral politics, our problems are different from those Americans dealt with 150 years ago, but the 19th century does have a surprisingly hopeful takeaway to offer the 21st.

We’re not the first generation to worry about the death of our democracy. Grappling with this demanding system of government is, well, normal. It’s partly because we’re following the unusually calmed 20th century that we don’t feel up to the task today. Our deep history shows that reform is possible, that previous generations identified flaws in their politics and made deliberate changes to correct them. We’re not just helplessly hurtling toward inevitable civil war; we can be actors in this story. The first step is acknowledging the dangers inherent in democracy. To move forward, we should look backward and see that we’re struggling not with a collapse but with a relapse.

Jon Grinspan, a curator of political history at the Smithsonian’s National Museum of American History, is the author of “The Age of Acrimony: How Americans Fought to Fix Their Democracy, 1865-1915.”

Can Glasgow Deliver on a Global Climate Deal?

How Will the Ukraine War End? 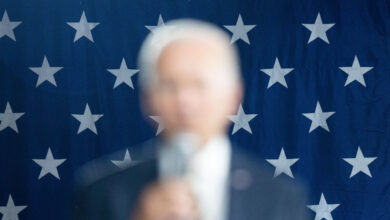 Some Hear Grammar Don’ts. I Hear the Future of English.