Training for a marathon two years ago, I ran so fast, I couldn’t believe the clock. It felt like I was lying.

Now when I trudge down those same paths where I took my limits and beat them, I’m a little wistful. It feels like a beautiful dream.

I’m not a professional runner — it’s something I do as a hobby, and it has been a rewarding one. For the 15 years I’ve raced marathons, I mostly got faster each time.

But when I got an email a few weeks ago confirming I had qualified for an elite start I’d coveted in the New York City Marathon — with a time logged just before the pandemic — my excitement quickly turned to dread. This Sunday, I’ll probably run the slowest marathon of my life.

With everything else that’s happened since my last marathon, I haven’t put in the kind of obsessive work that goes into training. Getting slower is easy to ignore when you’re jogging alone without a watch, as I’ve done for much of the past year. But my 26-mile tour of New York will clarify things quite a bit.

Still, I want to do it. I haven’t run this race in almost a decade, even though I’ve lived roughly two miles from the finish the whole time. After last year’s pandemic cancellation, this 50th running of the race will be historic. Healthy. Hopefully also fun.

I’m 37 and I’ve spent so much of my life convinced that not moving forward automatically meant sliding back. Running was an easy way to measure that. I worried that any slower time wasn’t just another valley before a new peak, but that it foretold a deterioration I was determined to defy.

I’m not the only one who struggles with this. Regarding a phenomenon he called “success addiction” in The Atlantic last year, Arthur Brooks, a Harvard professor, explained, “Though it isn’t a conventional medical addiction, for many people success has addictive properties.” Success stimulates the neurotransmitter dopamine, which keeps you coming back for more. Psychologists call it the “hedonic treadmill,” where you get so caught up in the relentless pursuit of success that you put it before everything, even happiness. The faster you go, the harder it is to jump off.

My hedonic treadmill was racing. It became a symbol of my trajectory in most other areas of life as well: work, relationships, health. The satisfaction and pride my highs have brought me were real. But it started to be as much about coveting those highs as fearing the lows.

Sometimes it feels like I’m racing the ghost of my former self. I’ve outrun her for so long that I don’t know what to do with the fact that now she might finally be closing in.

This marathon feels like a test of whether I can handle that. I’ve never been more uncertain about the future than I am now. But I have learned one thing. Over the past two years, in almost every part of my life, I’ve had no choice but to slow down — and the world didn’t end, as I feared.

Like many others, I’m ending this year realizing the life I had before the pandemic isn’t waiting for me on the other side. We all lost a lot. It’s time to figure out what to do with what’s left.

Shalane Flanagan, one of the best runners America has produced, is trying to figure this out, too. Ms. Flanagan, who won the 2017 New York City Marathon with a time of 2 hours 26 minutes, emerged from a career-ending double knee surgery two years ago and set out to race six marathons, each in under three hours, this fall.

She’ll be running among us commoners instead of the pros, if still faster than almost all of us, in the five boroughs on Sunday. At age 40, her times may be slower than her best, but they are still extraordinary. In reclaiming her sport on her own terms, Ms. Flanagan has taken the dusk of retirement and turned it into a dazzling sunset. 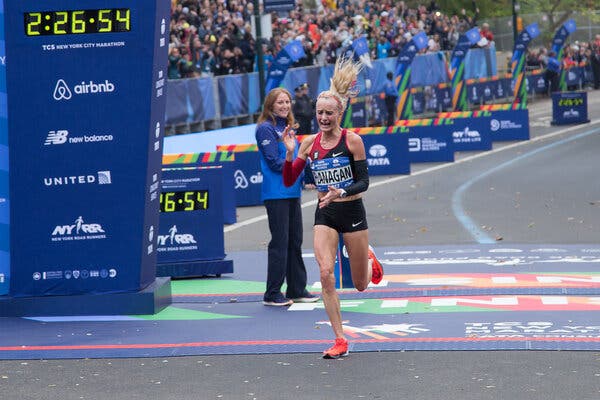 Shalane Flanagan crossing the finish line of the New York City Marathon in 2017.Credit…Uli Seit for The New York Times

“I’ve had a lot more fun this way,” she told me. “I dip my toe into being uncomfortable, but not so much that I can’t soak up what’s going on around me, which I couldn’t do when I had almost laser beam tunnel vision as a professional.”

“By dialing back just a little bit, it’s like a completely different sport to me now,” she continued. “It’s liberating. I don’t have to meet anyone’s expectations but mine.”

It has also felt different for me, to “jog” instead of “train.” The rigidity is gone. Sometimes when I get back from my regular running loop, my partner asks whether I did a long run. No, I tell him, I’m just a little slower, so it takes a little longer. But I’m healthy. I’m fast enough. I’m less injured than I’ve been probably since I was 12.

It takes courage to accept where you are now, to resist trying to force yourself back to what you once were. As great as it feels to peak, eventually we crest and then descend. Whether that’s now or later, we’ll all get there, and that’s fine. The ghost of my former self may still try to haunt me, but she’s no longer a rival I have to beat. Everything she has is mine, too.

On Sunday, I’m going to wake myself up before dawn. I’m going to tear through Central Park like I’m running the best race of my life. When people cheer for me, I’m going to cheer back. I’m going to cross the finish line as if I won. And when I see my ghost sprinting up ahead of me, I will smile.

Lindsay Crouse (@lindsaycrouse) is an editor and producer in Opinion who writes on gender, ambition and power. She produced the Emmy-nominated Opinion Video series “Equal Play,” which brought widespread reform to women’s sports. Her best marathon time is 2:53.

Wonking Out: Is the Great Resignation a Great Rethink?

A Woke-Up Call for Democrats

If You Have Something to Say, Then Say It

The City of London Is Hiding the World’s Stolen Money

The Fight Over Abortion Rights in Mexico Isn’t Over