The Congregation Beth Israel synagogue in Colleyville, Texas, on Sunday. The siege there took place on Saturday.Credit…Brandon Wade/Associated Press
Rabbi Charlie Cytron-Walker said he had allowed the gunman, Malik Faisal Akram, into the synagogue because it had appeared as if Mr. Akram was looking for somewhere to get warm.Credit…Mark Birnbaum

Re “Captives Made Daring Escape From Gunman” (front page, Jan. 18):

Particularly as a member of the Jewish community, I thank God that the hostages taken at Congregation Beth Israel in Colleyville, Texas, on Saturday were able to get free.

Rabbi Charlie Cytron-Walker is a hero. He deftly used the skills he had learned in security training to choose the proper moment to divert the attacker and escape, and he did so because he sensed that the perpetrator was becoming increasingly agitated and dangerous. Deserving of honorable mention are the law enforcement officials who negotiated with the gunman and were no doubt prepared to rush in to carry out a dangerous rescue mission if necessary.

While the outcome was the best possible under the circumstances, I am saddened and outraged that the country has experienced yet another senseless assault on peaceful people at worship that will surely haunt those involved and Jews throughout the country, and bring a heightened concern for safety to those of my faith who wish to be able to worship without fear.

We live in a country in the midst of a new era of hatred and intolerance, including a rising level of antisemitism and anti-Asian prejudice that manifests itself in harassment and assaults on innocent people who are simply going about their daily lives, posing no threat to anyone.

My synagogue now imposes a supplemental fee to our membership dues for security, and government appropriations have been provided to endangered houses of worship in an effort to keep congregants safe.

May people of good will somehow bring us back to the values and ideals of America. May we all be able to someday live in a country defined by tolerance, acceptance of others and peace.

After a Subway Killing, Add Glass Barriers in N.Y.C. Stations 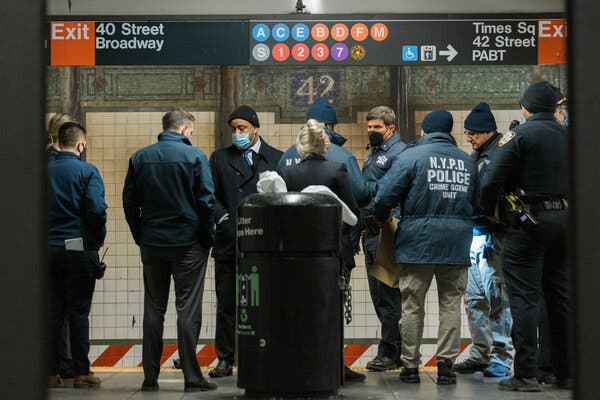 The scene at the Times Square station in Manhattan, where a woman was struck and killed by an R train on Saturday.Credit…Jeenah Moon for The New York Times

On Saturday a 40-year-old woman was shoved to her death in front of a subway train by a random stranger. This man is homeless and known to have mental health problems. And the public outcry has been predictable: We need more assistance for the mentally ill, for the homeless. We have to do better with violent subway crime, etc.

But honestly there is a fairly simple solution to this that other cities such as Paris and London have found. Many stations are lined with glass doors. When the train pulls in and aligns with the doors, they open. There is simply no way that you can shove a person onto a subway track in any of Paris’s heavily traveled stations.

I love New York City, but we should not be a city in which waiting for a train while going about our ordinary business becomes a matter of life and death. People slip and fall. People drop something onto the tracks or they are pushed to their death by a stranger just as the train pulls in.

We absolutely must deal with the issues of mental illness, homelessness and subway violence, but those are deep-rooted and complex issues. Glass doors are a very simple solution to a terrible problem that will make us all feel much safer as we go about our lives.

And given that the Metropolitan Transportation Authority is about to get a $6 billion federal assistance grant, I think some of that funding should go into glass doors. As we tackle our bigger problems as a city, let’s find a simple solution to this one.

Mary Morris
Brooklyn
The writer is the novelist and travel memoirist.

Dreams Dashed by the Bronx Fire

In a year when so little seems to have gone right in my life (or the world), I was moved by your photographs of those who died in the Bronx fire that took 17 lives. The wide-eyed, sweet face of Ousmane Konteh, 2; the downcast eyes, but a grin ready to erupt, on the face of Omar Jambang, 6; the broad, gleaming smiles of young women ready to take on the world and embark on their futures — all members of a tight-knit immigrant community with hopes and dreams of their own in their newfound country, America.

However crimped my life has been by Covid, however saddened I am by the losses of aging, how dare I complain.

Re “Trump Isn’t the Only One to Blame,’’ by Osita Nwanevu (Opinion guest essay, Jan. 5):

The essay avoids the elephant in the room when it attributes Republican success to “structural advantages,” such as the malapportionment of the Senate that benefits red rural states. The real issue is why Democrats can’t compete in those red rural states, and why Democrats can’t win a majority of state legislatures so they are not victimized by gerrymandering and voter suppression laws.

Complaining about how unfair the rules are is an admission that the Democrats have nothing to offer voters in red states and don’t want to compete for them. In the 2022 midterms, the real danger is not that Republicans will cheat to win, but that they won’t have to.

Alan Draper
Saratoga, N.Y.
The writer is a professor of government at St. Lawrence University.

Vote Counting and the V.P.

Those in G.O.P. circles, especially Donald Trump, are asserting that the vice president has the authority to reject any electoral votes considered to be suspect.

Maybe they are forgetting that for the 2024 election that vice president will be Kamala Harris.

Why Are Progressives Hating on Antitrust?

What a Trillion-Dollar Coin Can Teach Us

The Growing Fight Over Voting Rights