This article is part of the Debatable newsletter. You can sign up here to receive it on Tuesdays and Thursdays.

It has not been a good month for Facebook. A few weeks ago, The Wall Street Journal began publishing a damning investigative series, “The Facebook Files,” based on leaked internal documents revealing that the tech giant knows its platforms are causing great social harm — often in ways only the company fully understands — but has done little to alleviate it for fear of losing profits.

“The version of Facebook that exists today is tearing our societies apart and causing ethnic violence around the world,” Frances Haugen, the whistle-blower who provided the documents at the heart of The Journal’s investigation, told CBS. “Facebook has realized that if they change the algorithm to be safer, people will spend less time on the site, they’ll click on less ads, they’ll make less money.”

But before that scandal could be fully metabolized, The Great Facebook Blackout happened: Facebook and its family of apps — Messenger, Instagram and WhatsApp — suffered an unusually debilitating global outage on Monday, depriving 3.5 billion people of an important — or in many countries, the only — means of digital communication.

As the blackout made clear, our world is very much dependent on Facebook. But would we be better off without it? Here’s what people are saying.

Here are just a few forms of malfeasance the Journal investigation revealed:

“Time and again, the documents show, Facebook’s researchers have identified the platform’s ill effects,” The Journal found. “Time and again, despite congressional hearings, its own pledges and numerous media exposés, the company didn’t fix them.”

The case for shutting it all down

Facebook, for its part, responded to The Journal’s investigation by claiming it contained mischaracterizations and promising to “continue to improve our products and services.”

In an essay last year, my former colleague Charlie Warzel argued that such promises only work to obscure the platform’s fundamental incapacity for reform. “The architecture of the social network — its algorithmic mandate of engagement over all else, the advantage it gives to divisive and emotionally manipulative content — will always produce more objectionable content at a dizzying scale,” he wrote.

“You see lots of people putting forth a hopeful idea of a new, humane social media platform to rescue us — one that respects privacy or is less algorithmically coercive,” Siva Vaidhyanathan, a professor of media studies at the University of Virginia, told Warzel. “But if we’re being honest, what they’re really proposing at that point is not really social media anymore.”

Indeed, in 2019, Annalee Newitz argued in The Times that the time had come for social media to be replaced by some other medium of communication, much the same way that television was replaced by the internet. “We need to stop handing off responsibility for maintaining public space to corporations and algorithms — and give it back to human beings,” she wrote. “We may need to slow down, but we’ve created democracies out of chaos before. We can do it again.”

As “The Facebook Files” were being published, the head of Instagram, Adam Mosseri, spoke on a podcast to defend the company, claiming its good works outweighed its sins: “Cars create way more value in the world than they destroyed,” he said. “And I think social media is similar.”

It’s not just people whose salaries depend on believing this argument who believe it. Haugen, the whistle-blower, suggests that Facebook can still play a positive role in the world: “I don’t hate Facebook,” she wrote of her motives for leaking. “I love Facebook. I want to save it.”

And true enough, Facebook does serve some socially useful functions:

When Warzel made his case for Facebook’s abolition, he also sought out some of the countless ideas that have been proposed for its reform:

[Related: The secret lives of Facebook moderators in America]

The Times’s Kevin Roose says the most recent revelations show “a company worried that it is losing power and influence, not gaining it, with its own research showing that many of its products aren’t thriving organically.”

What might a better organizing principle for Facebook’s business model be, if not engagement at all costs? Kate Klonick, an assistant professor at St. John’s University Law School, argues it should be “user experience,” which might entail measuring the good things Facebook offers, not just the bad — how likely a user is to attend a protest, for example, or to give to a charitable cause.

The hope for the possibility of a better Facebook was palpable on Tuesday when Haugen testified before a Senate subcommittee about her findings. “Facebook wants you to believe that the problems we’re talking about are unsolvable,” she said.“I am here today to tell you that’s not true. These problems are solvable. A safer, free-speech-respecting, more enjoyable social media is possible.”

Are you done with Facebook, or do you still think the platform’s pros outweigh its cons? Email us at debatable@nytimes.com. Please note your name, age and location in your response, which may be included in the next newsletter.

“Give Amazon and Facebook a Seat at the United Nations” [Bloomberg] 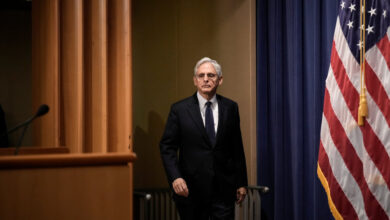 Merrick Garland ‘Rose to the Occasion’

Neil Young and Liz Cheney, Thanks for Sticking Your Necks Out

Is Our Homelessness Crisis Really a Drug Problem, Part 2