This article is part of the Debatable newsletter. You can sign up here to receive it on Tuesdays and Thursdays.

Last week, as images emerged from the southern border of Border Patrol agents on horseback chasing Haitians and brandishing reins, the senior U.S. envoy to Haiti, Daniel Foote, resigned in protest over what he called the Biden administration’s “inhumane, counterproductive decision to deport thousands of Haitian refugees” seeking to enter the country.

The immediate response from the White House to Foote’s resignation was to clarify that these were not deportations because “people are not coming into the country through legal methods” — a clarification that the American Civil Liberties Union criticized as beside the point because migrants have a right to claim asylum, regardless of their legal status.

President Biden once vowed to “undo the moral and national shame of the previous administration,” which he criticized for “bullying legitimate asylum seekers.” But at the moment, he is ratifying his predecessor’s legacy. Why is this erosion of asylum rights occurring, and how enduring should we expect it to be? Here’s what people are saying.

Before the Holocaust, the United States made little distinction between people fleeing their countries because of persecution and immigrants seeking economic opportunity. But the end of World War II gave rise to a new system of laws and organizations designed to help European refugees immigrate.

In 1951 the United Nations adopted the Geneva Refugee Convention, which defined refugees as those who are unable or unwilling to return to their country because of persecution — or a well-founded fear of persecution — based on race, religion, nationality, membership in a particular social group or political opinion. In 1967 the U.N. expanded the scope of that definition, which had been limited to people fleeing events before 1951 and in Europe, to people fleeing any part of the world and to any time.

The United States didn’t sign the Geneva Refugee Convention, but Congress adopted some of its key provisions, including the international refugee definition, into U.S. immigration law when it passed the Refugee Act of 1980. In the United States, a person must also meet this definition to be granted asylum: The primary difference, according to the International Rescue Committee, is that refugees are granted refugee status outside a host country and asylum seekers within it.

Under U.S. law, people who are granted asylum status are allowed to stay in the country and have the right to work, travel and apply for their spouse or children under the age of 21 to join them.

How asylum protections are being chipped away

In the years since President Donald Trump’s election, the U.S. asylum system “has almost become unrecognizable,” Nicole Narea reported for Vox in 2019. Layer by layer, she wrote, the administration built up “a series of impediments in Central America, at the border, in detention centers and in the immigration courts that have made obtaining asylum nearly impossible.”

By the numbers: When he took office in 2017, Trump inherited a backlog of about 540,000 immigration cases; by the time he left, the backlog had ballooned to nearly 1.3 million pending cases. Of those applying for asylum, the courts denied a record 72 percent.

Traditionally, migrants who completed the purposefully lengthy wait at the southern border and those who were apprehended between ports of entry were held at processing facilities and eventually released, transferred to detention or deported. But in 2019 the Trump administration debuted a policy, known as Remain in Mexico, of sending most asylum seekers entering from Mexico back to that country to wait for a U.S. hearing, which often takes months or years.

At that point, asylum seekers have to present their case before U.S. immigration courts, which the Times editorial board described as “not actual courts”: Applicants have no right to a lawyer, and judges and prosecutors work for the Justice Department. “It’s hard to imagine a more glaring conflict of interest than the nation’s top law-enforcement agency running a court system in which it regularly appears as a party,” the board wrote. What’s more, “Trump hired hundreds of new judges, prioritizing ideology over experience, such as by tapping former Immigration and Customs Enforcement prosecutors and others who would help convert the courts into a conveyor belt of deportation.”

The Covid pandemic created an opportunity to make the asylum process even more prohibitive. In his last year in office, Trump invoked Title 42, which allows authorities, on public health grounds, to deny migrants their usual rights to claim asylum and which the Biden administration has continued to use, expelling more than 700,000 people since February, according to BuzzFeed.

“All other people arriving in the U.S., including American citizens, lawful permanent residents and tourists arriving by plane or ship, are exempt” from Title 42, wrote Karen Musalo, a professor of international law, in The Conversation. “As currently employed by the government, this public health law has displaced existing immigration law, which allows people to request asylum. And in doing so it has also eliminated the due process protections that are part of our immigration laws.”

Exclusion under the pretense of public health isn’t new for Haitians, who even before the pandemic were granted asylum at the lowest rate of any nationality with consistently high numbers of asylum seekers, according to an analysis of data by The Associated Press.

“For the Haitian community and Haitian migrants in particular, they’ve repeatedly been targeted as disease carriers, which historically has also been a racialized notion not only of the foreign-born but especially of the nonwhite foreign-born,” Carl Lindskoog, a professor of history at Raritan Valley Community College, told Vox. “In the 1970s, their incarceration exclusion was sometimes justified on the basis that they were carrying tuberculosis. In the 1980s and especially in the 1990s, it became the notion that they were carrying AIDS.”

Some have traced America’s troubled relationship with Haiti back to its founding as the first nation to permanently abolish slavery — at the cost of some $28 billion in reparations that French enslavers demanded from Haitians in return. Starting in 1915, the United States invaded and occupied the country for nearly 20 years. As Frederick Douglass said in 1893, “Haiti is Black, and we have not yet forgiven Haiti for being Black.”

Today, Title 42 is being used to cut off asylum access for Central American migrants as well as Haitians. Reuters reported, “With most ports of entry closed to asylum seekers, thousands of desperate migrants have also been stranded in Mexico for months in dangerous border towns, like Tijuana and Reynosa.”

Why asylum protections won’t be easy to restore

The Biden administration has undone some of the Trump administration’s immigration policies — notably the travel ban from several Muslim-majority countries and the zero-tolerance family separation policy — and has promised to make the asylum system more humane. A representative for the Department of Homeland Security told BuzzFeed that the administration is undertaking “a monumental task to rebuild our previously decimated immigration system while enforcing our laws.”

But some of the administration’s actions point in a different direction. As recently as this month, Homeland Security Secretary Alejandro Mayorkas vowed to continue deportations of asylum seekers under Title 42.

And even if the administration halted its reliance on Title 42, the problems that plagued the asylum system before the pandemic would remain. In the view of the Times editorial board, fixing them would require Congress to remove immigration courts from Justice Department jurisdiction and to transform them into independent institutions, similar to other administrative courts that handle bankruptcy, income tax and veterans’ cases. In the short term, the system would have to be properly staffed and funded to deal with its backlog.

Such comprehensive changes seem a remote possibility for now. This month, the Supreme Court upheld the Remain in Mexico policy — a decision some Biden officials greeted with relief, as the White House was reportedly considering keeping some version of it in place. “This administration’s immigration policy is schizophrenic,” one senior homeland security official told BuzzFeed. “Their words are not backed up by policy choices or deeds.”

The apparent hypocrisy has incensed parts of the Democratic Party’s base, which, after four years of an explicitly anti-immigration presidency, remains on alert for potential human rights abuses on the southern border. “The assumption that these tactics would go unchallenged when deployed by a Democratic administration, as was often the case in the past, appears to have been a serious miscalculation,” Caitlin Dickerson reported for The Atlantic. “The spotlight that Trump shined on the southern border for four years is still plugged in.”

Do you have a point of view we missed? Email us at debatable@nytimes.com. Please note your name, age and location in your response, which may be included in the next newsletter.

“Haiti, the U.S. and Defining the Stakes of the Migration Crisis” [Columbia Journalism Review]

“Biden’s Moral Crisis on the Border” [The Washington Post]

“The Mendacity of Joe Biden” [The New York Times]

Do Democrats Have the Courage of Liz Cheney? 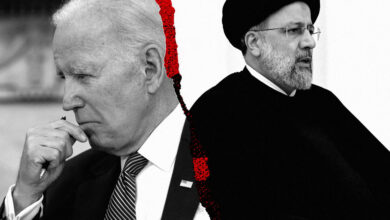 After the Rushdie Attack, Can the Iran Nuclear Deal Be Saved? 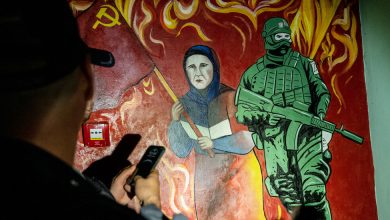 Putin Is Not Liberating My Family. He Is Subjugating Them.

How Liberals Can Be Happier