SAN FRANCISCO — For years, Christian Lantz has played S.T.A.L.K.E.R., a first-person shooter game set in a post-apocalyptic Ukraine that became a cult hit for its immersive role playing. So when the 18-year-old high schooler heard a sequel was coming this year, he knew he had to buy it.

That was until GSC Game World, the Ukrainian company behind the computer game, announced last month that the new S.T.A.L.K.E.R. would incorporate the crypto-based assets known as nonfungible tokens, or NFTs. In the new game, GSC said, players could buy and sell NFTs of items like clothing for their in-game characters. The company heralded the move as a “transformative step” toward the virtual world known as the metaverse.

Mr. Lantz was incensed. He joined thousands of fans on Twitter and Reddit who raged against NFTs in S.T.A.L.K.E.R.’s sequel. The game maker, they said, was simply looking to squeeze more money out of its players. The backlash was so intense that GSC quickly reversed itself and abandoned its NFT plan.

“The studio was abusing its popularity,” Mr. Lantz, who lives in Ontario, said. “It’s so obviously being done for profit instead of just creating a beautiful game.” 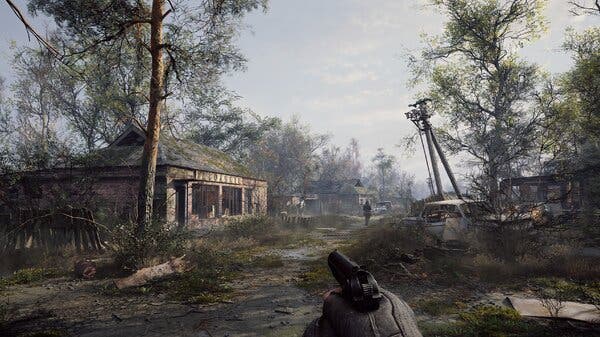 A still from “S.T.A.L.K.E.R. 2: Heart of Chernobyl.” The game’s maker recently abandoned a plan to add NFTs to the game.Credit…GSC Game World

For more than a year, crypto mania has been at a fever pitch. Cryptocurrencies such as Bitcoin and Ethereum have soared in value. Crypto-based assets like NFTs have taken off. Jack Dorsey, a Twitter founder, recently renamed one of his companies Block in honor of the blockchain, the distributed ledger system that powers digital currencies. Melania Trump has auctioned off her own NFTs.

But to some, the crypto craze has gone too far, too fast. Skeptics argue that cryptocurrencies and related assets like NFTs are digital Ponzi schemes, with prices artificially inflated beyond their true value. Some question whether cryptocurrencies and the blockchain, which are slippery concepts, have any long-term utility.

Nowhere has there has been more unhappiness than in the games community, where clashes over crypto have increasingly erupted between users and major game studios like Ubisoft, Square Enix and Zynga. In many of the encounters, the gamers have prevailed — at least for now.

“People are being sold buzzwords,” said Mutahar Anas, a gamer and YouTuber with three million subscribers. Those pushing NFTs in games, he said, are “trying to sell you snake oil.”

In recent months, at least half a dozen game studios have revealed plans to add NFTs to their games or said they were considering doing so. The digital assets, which are verified by blockchain technology, give proof of authenticity and ownership. That provides gamers with unique digital items, game makers said, which can enrich those that sell the NFTs in online marketplaces. Game publishers said NFTs could also potentially be transferred among games in the future, meaning items from one games franchise could affect gameplay in another.

But players said they see the moves as a blatant cash grab.

“I just hate that they keep finding ways to nickel-and-dime us in whatever way they can,” said Matt Kee, 22, a gamer who took to Twitter in anger this month after Square Enix, which produces one of his favorite games, Kingdom Hearts, said it was pushing into NFTs. “I don’t see anywhere mentioning how that benefits the gamer, how that improves gameplay. It’s always about, ‘How can I make money off this?’”

A still from “Kingdom Hearts III,” produced by Square Enix. The company recently said it planned to push into NFTs.Credit…Disney/Square Enix

Much of their resentment is rooted in the encroachment of micro transactions in video games. Over the years, game makers have found more ways to profit from users by making them pay to upgrade characters or enhance their level of play inside the games. Even if people had already paid $60 or more for a game upfront, they were asked to fork over more money for digital items like clothing or weapons for characters.

In one well-known incident in 2006, the role-playing game “The Elder Scrolls IV: Oblivion” charged users $2.50 for a set of armor for their character’s horse.

“‘It was only a few bucks, but I remember thinking, ‘Why won’t they just give us the horse armor?’” said Eric Hild, 31, a beer brewer from Decorah, Iowa. “‘Why make us pay for it?’”

Merritt K, a game streamer and editor at Fanbyte, a games industry site, said gamers’ antagonism toward the companies has built up over the last decade partly because of the growing number of micro transactions. So when game makers introduced NFTs as an additional element to buy and sell, she said, players were “primed to call this stuff out. We’ve been here before.”

That has led to bursts of gamer outrage, which have rattled the game companies. In December, Sega Sammy, the maker of the Sonic the Hedgehog game, expressed reservations about its NFT and crypto plans after “negative reactions” from users. Ubisoft, which makes titles like Assassin’s Creed, said that it had misjudged how unhappy its customers would be after announcing a NFT program last month. A YouTube video about the move was disliked by more than 90 percent of viewers.

“Maybe we under-evaluated how strong the backlash could have been,” said Nicolas Pouard, a Ubisoft vice president who heads the French company’s new blockchain initiative.

Game companies said their NFT plans were not motivated by profit. Instead, they said, NFTs give fans something fun to collect and a new way for them to make money by selling the assets.

“It really is all about community,” said Matt Wolf, an executive at the mobile game maker Zynga, who is leading a foray into blockchain games. “We believe in giving people the opportunity to play to earn.”

The rush to embrace crypto in games has gathered steam over the past few years. Some developers began building games on the blockchain, making it easy for players to collect digital assets and prove they own them. One such game was CryptoKitties, a 2017 hit where players collected digital cats, some of which sold for more than $100,000. In the pandemic, blockchain-based games like Axie Infinity, where players make money by earning and selling NFTs, also became popular.

Bigger game studios are now trying to get in on the action, though some of their crypto plans remain vague.

Ubisoft was the first large game publisher to wade into crypto. In December, it announced an initiative known as Ubisoft Quartz, introducing three sets of NFTs in the form of digital equipment like helmets and guns. The NFTs were available for free in the shooter game Ghost Recon Breakpoint for players who had reached a certain level in the game. Gamers, the company said, could keep the items or sell them on third-party markets.

A Ghost Recon Breakpoint game station at the Electronic Entertainment Expo in Los Angeles in 2019.Credit…Adam S Davis/EPA, via Shutterstock

So far, 10,000 digital wallets — tools that allow people to store their crypto assets — have been connected to the Quartz platform, even though Ubisoft minted just 3,000 NFTs in its first batch, Mr. Pouard said. That suggested an appetite for more NFTs in the future, he said.

A Guide to Cryptocurrency

A glossary. Cryptocurrencies have gone from a curiosity to a viable investment, making them almost impossible to ignore. If you are struggling with the terminology, let us help:

Bitcoin. A Bitcoin is a digital token that can be sent electronically from one user to another, anywhere in the world. Bitcoin is also the name of the payment network on which this form of digital currency is stored and moved.

Blockchain. A blockchain is a database maintained communally, that reliably stores digital information. The original blockchain was the database on which all Bitcoin transactions were stored, but non-currency-based companies and governments are also trying to use blockchain technology to store their data.

Cryptocurrencies. Since Bitcoin was first conceived in 2008, thousands of other virtual currencies, known as cryptocurrencies, have been developed. Among them are Ether, Dogecoin and Tether.

Coinbase. The first major cryptocurrency company to list its shares on a U.S. stock exchange, Coinbase is a platform that allows people and companies to buy and sell various digital currencies, including Bitcoin, for a transaction fee.

Crypto finance. The development of cryptocurrencies spawned a parallel universe of alternative financial services, known as Decentralized Finance, or DeFi, allowing crypto businesses to move into traditional banking territory, including lending and borrowing.

NFTs. A “nonfungible token,” or NFT, is an asset verified using blockchain technology, in which a network of computers records transactions and gives buyers proof of authenticity and ownership. NFTs make digital artworks unique, and therefore sellable.

Zynga, which is set to be acquired by Take-Two, hired Mr. Wolf, a games industry veteran, to lead a crypto effort in November. The goal was to create new games on the blockchain, making it easy for players to acquire, own and sell NFTs, Mr. Wolf said. He provided few details about how the effort would work, including whether the NFTs could be transferred between Zynga games.

“We’re still developing all that,” he said.

Other game companies have waded into NFTs, echoing how crypto can generate new wealth for users. This month, Yosuke Matsuda, Square Enix’s president, wrote in an open letter that creating blockchain games would allow players to make money. That would become “a major strategic theme” for the company, he said.

But as the number of NFT announcements from game studios piled up, players became increasingly annoyed. After users rebelled against Sega Sammy’s crypto plans, one of its executives said in a management meeting last month, “If it is perceived as simple moneymaking, I would like to make a decision not to proceed.” (The effort is continuing.)

Other game companies have come out against crypto. Phil Spencer, the head of Microsoft’s Xbox, told Axios in November that some games centered on earning money through NFTs appeared “exploitative” and he would avoid putting them in the Xbox store. Microsoft declined to comment.

Valve, which owns the online game store Steam, also updated its rules last fall to prohibit blockchain games that allow cryptocurrencies or NFTs to be exchanged. Valve did not respond to a request for comment.

And Tim Sweeney, the chief executive of Epic Games, the maker of the game Fortnite, said his company would steer clear of NFTs in its own games because the industry is riddled with “an intractable mix of scams.” (Epic will still allow developers to sell blockchain games in its online store.)

The blowback has affected more than just game studios. Discord, the messaging platform popular with gamers, backtracked in November after users threatened to cancel their paid subscriptions over a crypto initiative. Jason Citron, Discord’s chief executive, had teased the project on Twitter, prompting the mutiny.

“While I’m optimistic that there’s a lot of cool stuff going on in the blockchain space, there’s also a lot of problems,” Mr. Citron said in an interview.

Mr. Kee, the gamer, said he would continue fighting game companies’ crypto efforts. The S.T.A.L.K.E.R. developer’s about-face on NFTs made him hopeful that other companies could be swayed through public opinion, he said.

“It gives me a good feeling that everyone is vocal against this,” he said. “Over the past 10 years, we’ve seen all sorts of these schemes come up, and we’re tired of it.”

Biden accuses Republicans of being ‘reckless’ over the debt limit increase.