GLASGOW — After a drastic decline last year, global fossil fuel emissions have rebounded sharply in 2021 and are now just slightly below their previous record highs, researchers said Wednesday. It’s yet another sign that countries are still far from their goals of avoiding the worst effects of global warming.

In 2020, carbon dioxide emissions from fossil fuels and industry plummeted 5.4 percent worldwide as businesses shut down and governments ordered people to stay home amid the coronavirus outbreak. It was the largest one-year drop on record.

But experts had long warned that the drop was likely to prove temporary, and the new data, published by the Global Carbon Project, confirms it. In 2021, emissions are projected to rise 4.9 percent as the global economy has rumbled back to life and lockdowns have mostly eased.

Overall, global emissions are now less than 1 percent below their previous high in 2019, suggesting that any climate impact from the pandemic was fleeting.

“Essentially, we halted the global economy and then brought it back to life with mostly the same fossil-fuel-powered cars, trucks, factories and power plants that we had before,” said Pierre Friedlingstein, a climate scientist at the University of Exeter who led the research. “If we want to see a sustained decline in global emissions, we can’t just put the economy on pause during a pandemic. We have to change those systems.” 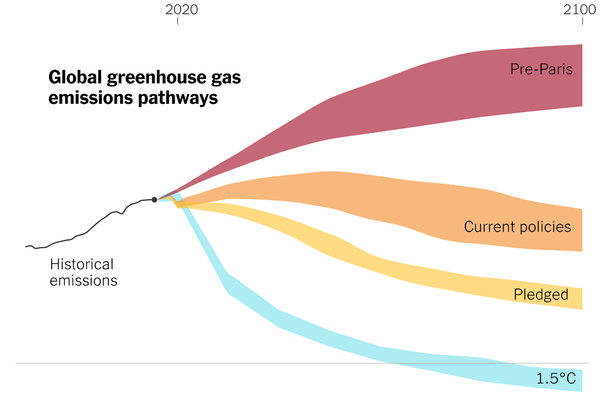 Yes, There Has Been Progress on Climate. No, It’s Not Nearly Enough.

Nations have started making progress on climate change. But we’re still on track for dangerous warming unless those efforts accelerate drastically.

The new emissions numbers were released during a major United Nations climate summit in Glasgow, where world leaders are discussing how to accelerate efforts to tackle climate change, proposing new measures to protect forests and curb emissions of methane. But the data underscores the challenges that many nations are facing in shifting rapidly away from relying on fossil fuels.

When the coronavirus pandemic first hit, many environmentalists and even some world leaders suggested that nations should take the opportunity to shift the global economy to cleaner sources of energy and prevent emissions from rebounding too sharply. But, with a few exceptions, most countries have largely squandered the chance for a “green recovery.”

A recent report from the United Nations found that while the world’s nations spent more than $16 trillion on stimulus measures over the past year, they largely focused on reviving the traditional fossil-fuel-dependent parts of their economies as quickly as possible, with less than one-fifth of recovery funds used to promote low-carbon alternatives.

The United States could alter that picture somewhat if Democrats in Congress end up passing a vast spending bill that, in its current incarnation, includes about $555 billion in spending for clean energy technologies. But lawmakers are still wrangling over the fate of that bill.

“I do think the world missed a real opportunity to change direction,” said Rob Jackson, a professor of earth system science at Stanford who also contributed to the new emissions research. “We might have seen emissions snap back this year in any case, since it’s tough to completely change the global energy system in a single year, but we could have set ourselves up much better for future years.”

Protesters outside the Grangemouth Oil Refinery in Grangemouth, Scotland, on Tuesday.Credit…Andrew Testa for The New York Times

The analysis did include some slightly good news: When emissions from land use and deforestation are included, it appears that global carbon dioxide emissions have stayed more or less flat over the past decade, after a rapid increase during the early 2000s, suggesting that nations are slowly making progress in bending the emissions curve.

Dr. Jackson of Stanford cautioned that it was still quite possible that global fossil fuel emissions could rise to a record level in 2022, as a few major sectors, like ground transportation and aviation, have not fully recovered from the pandemic.

“It doesn’t seem like we’ve reached peak emissions yet globally,” he said. “And remember, it’s not enough for emissions to peak and then plateau. If we want to stop the planet from continuing to heat up, then emissions have to go to zero.”

The new data shows just how enormous a task that will be. In 2020, carbon dioxide emissions fell by roughly 1.9 billion tons globally. But in order to limit global warming to 1.5 degrees Celsius above preindustrial levels — a threshold many scientists say is necessary to avoid the worst effects from heat waves, droughts, wildfires and flooding — emissions would have to fall, on average, 1.4 billion tons every single year between now and 2050.

“That really shows you the sheer scale of the action required,” Dr. Friedlingstein said.

Relatively few countries account for the majority of the world’s carbon dioxide emissions, with China now responsible for 31 percent, the United States 14 percent, the European Union 7 percent and India 7 percent.

Emissions produced by the United States and the European Union have steadily declined over the past decade, in part through the closing of coal plants and the addition of more renewable energy. And it doesn’t appear that the pandemic fundamentally changed that trajectory: While emissions rose roughly 7.6 percent in both places in 2021, and coal use has bounced back this year in the United States, that rebound was not enough to offset even larger declines the previous year, and emissions remain below 2019 levels in both places.

The story is slightly different in China and India. In China, emissions are now 5.4 percent above 2019 levels, thanks in part to a surge in coal use for electricity and industry. In India, emissions are 4.4 percent higher than before the coronavirus pandemic hit. Both countries appeared to be on track to reach record highs in coal consumption this year, although their leaders have recently pledged to accelerate investments in renewable energy over the next decade.

For the rest of the world combined, the analysis found, emissions are still below 2019 levels.

Offered a Chance to Reinvent Policing, Minneapolis Opts for What It Knows

Britain Becomes First to Authorize an Antiviral Pill for Covid-19

A Push for Social Security to Resume Mailing Annual Updates

He Helped Build Tesla. Now He’s Gunning for It.