We’re covering new data from Britain about the severity of Omicron and an easing of sanctions on Afghanistan. 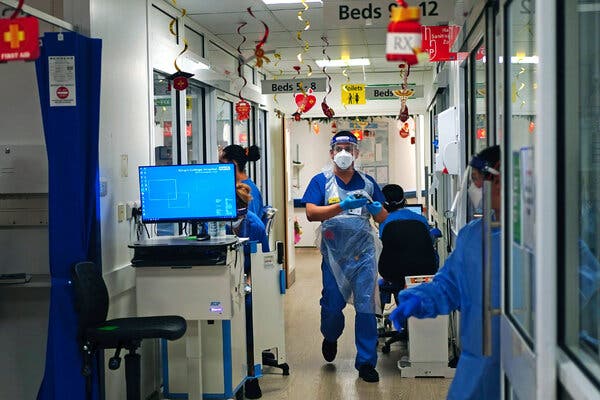 Medical staff tended to patients in a Covid ward at King’s College Hospital in London on Tuesday.Credit…Victoria Jones/Press Association, via Associated Press

Omicron infections do not seem as severe, U.K. data shows

Two new studies suggest that Omicron infections more often result in mild illness compared with previous variants of the coronavirus, offering hope that the current surge may be less catastrophic than feared.

The research, conducted in Britain and released on Wednesday, indicated that Omicron was less likely to put people in hospitals. One study looked at hospital admissions for the Delta and Omicron variants in November and December and found a two-thirds reduction in the risk of hospitalization. A separate analysis looked at Omicron and Delta cases in the first two weeks of December and saw a smaller reduction in hospital visits.

The analysis of infections in early December examined 56,000 cases of Omicron and 269,000 cases of Delta, according to The Guardian.

“What you’ve heard is a qualified good-news story,” said Dr. Jim McMenamin, incident director for Covid-19 at Public Health Scotland. But he warned that hospitals could still be filled because of the rate of transmission.

The latest: Britain surpassed 100,000 new coronavirus cases on Wednesday for the first time. England’s government cut down the isolation period for people who have shown symptoms of Covid-19, to seven days from 10, which could help alleviate medical staffing shortages.

In South Africa, where Omicron was first confirmed, cases have been slowing down, according to researchers: more than 20 percent in the last week.

Sacks of flour from an aid convoy were unloaded in Afghanistan.Credit…Victor J. Blue for The New York Times

The Biden administration on Wednesday took steps to ease the pressure of sanctions as the combination of the pandemic, a drought, the loss of foreign aid and frozen currency reserves have Afghanistan’s economy on the brink of collapse.

Sanctions had been put in place to cut the Taliban off from the international financial system. A cash shortage followed, crippling banks and businesses and sending prices soaring.

The Treasury Department will issue new “general licenses” to make it easier for nongovernmental organizations, international aid groups and the U.S. government to provide relief to the Afghan people while maintaining economic pressure on the Taliban. This month, it issued a license allowing personal remittance payments to be sent to people in Afghanistan.

Financial transactions can involve the Taliban and members of the Haqqani Network as long as they serve basic human needs, civil society development, and environmental and natural resource protection.

Related: Also on Wednesday, the U.N. Security Council unanimously adopted a resolution that exempts humanitarian activities such as payments and delivery of goods and services from U.N. sanctions for a one-year period.

A secret prayer meeting at a home in Madhya Pradesh, India, in February. Credit…Atul Loke for The New York Times

A wave of anti-Christian violence has swept through villages in India, with groups burning Christian literature, attacking schools and assaulting worshipers.

Laws have helped them along, like a recent one that targets religious conversions with up to 10 years in prison. The police and members of India’s governing party have helped them as well, government documents and dozens of interviews revealed. A white-collar army of lawyers and clerks has filed legal complaints against Christian organizations.

In many churches, the act of going to pray can be dangerous. Some groups have broadly felt less safe in India in recent years, amid growing Hindu nationalist sentiment fanned by politicians.

Secret worship: In some areas of northern and central India, where evangelicals are making inroads among lower-caste Hindus, people are holding clandestine ceremonies at night, conducting secret baptisms and passing out small audio Bibles.

Quotable: “I just don’t get it,” said Abhishek Ninama, a Christian farmer, who stared dejectedly at a rural church stomped apart this year. “What is it that we do that makes them hate us so much?”

When Vinod Menon, a physics professor at City College of New York in Harlem, opened an ordinary box that had been sitting in the mailroom for months, he was startled by its contents: $180,000 in cash.

Carol singers outside the Mayflower pub in London.Credit…Tom Jamieson for The New York Times

‘Caroling on the edge’

In Britain, the tradition of door-to-door caroling dates to at least Victorian times and is mentioned in Charles Dickens’s novels. Last year, most carol singing was canceled because of the pandemic. This year, a group of roving singers was determined to carry on, despite the threat of the Omicron variant, Alex Marshall reports for The Times.

Last Thursday, three carol singers went pub to pub to raise money for a homeless charity. (By the end of the night, their number had swelled to eight.) Quickly, an intricately harmonized rendition of “Deck the Halls” summoned drinkers from their chairs — and, eventually, brought donations into red collection tins.

The pub crawl was not without risk, said Meg McClure, one of the organizers, who described it as “caroling on the edge.” But every singer had taken a rapid antigen test before attending, she said, and the group had planned to perform outside if any of the pubs they visited were too busy.

That turned out not to be the case: At The Brunel, one of the pubs on the tour, there were just five customers, two of them visibly drunk. But as soon as the group started singing, it grabbed the audience’s attention.

One patron, stirred by the harmonies, pantomimed a heart attack. Another said she had originally planned to attend a concert by the rapper Little Simz that evening, but had decided not to go because she was worried about catching the virus. “So this is amazing,” she said. “It’s the next best thing.”

Start your day with a treat of gingerbread biscotti dipped in coffee (or any of these holiday cookies).

Our editors’ picks for new books touch on sea stories and trauma’s impact.

What to Listen TO

Six podcasts to help you to take a breath, refill your emotional cup and get some rest before the New Year.

P.S. Mark Leibovich is leaving The Times for The Atlantic.

The latest episode of “The Daily” is about the Covid testing crisis.

Natasha Frost wrote the Arts and Ideas section. You can reach Melina and the team at briefing@nytimes.com.

Carlos Tejada, Deputy Asia Editor for The Times, Dies at 49

Nobel Prize Awarded to Scientists for Research About Temperature and Touch

Israeli Is Killed by Palestinian Militant Near Holiest Site in Jerusalem

Who, and Where, Is Peng Shuai?