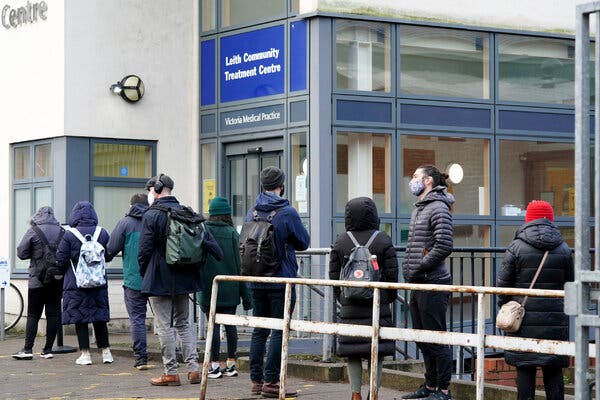 A vaccination line in Edinburgh this week.Credit…Jane Barlow/Press Association, via Associated Press

Separate teams of scientists in South Africa, Scotland and England have found that Omicron infections more often result in mild illness than earlier variants of the coronavirus, offering hope that the current surge may be less catastrophic than feared.

The research suggests that the variant may have biological features that make it somewhat less dangerous than Delta. However, Omicron’s lowered risk of hospitalization in all three countries appears to be due in large part to immunity in those populations, whether from vaccination or prior infection.

Omicron has quickly become the dominant variant in the U.S., Europe and many other regions. Yet additional encouraging news came from South Africa yesterday, suggesting that these surges may not last as long as previous ones: Officials said the wave of infections there may have already peaked.

The latest: Britain surpassed 100,000 daily new coronavirus cases yesterday for the first time. England’s government cut down the isolation period for people who have shown symptoms of Covid-19, to seven days from 10, which could help alleviate medical staffing shortages.

A wave of anti-Christian violence has swept through villages in India, with groups burning Christian literature, attacking schools and assaulting worshipers.

Laws have helped them along, like a recent one that targets anyone leading religious conversions with up to 10 years in prison. The police and members of India’s governing party have helped as well, government documents and dozens of interviews revealed. A white-collar army of lawyers and clerks has filed legal complaints against Christian organizations.

In many churches, the act of going to pray can be dangerous. Minority groups have broadly felt less safe in India in recent years, amid growing Hindu nationalist sentiment fanned by politicians.

Quotable: “I just don’t get it,” said Abhishek Ninama, a Christian farmer, who stared dejectedly at a rural church stomped apart this year. “What is it that we do that makes them hate us so much?”

Pipes for the Nord Stream 2 pipeline, which is unlikely open anytime soon.Credit…Jens Buettner/DPA, via Associated Press

Europe’s energy crunch shows little sign of easing. Supplies of natural gas are tight, and traders doubt the continent has enough of the fuel stored to last a cold winter without disruption. In a worst-case scenario, analysts say blackouts are possible, and factories may be ordered to cut their gas use to ensure households can stay warm.

Low volumes of gas from Russia have helped raise prices in recent months, while tensions over Ukraine make it very unlikely that the giant Nord Stream 2 pipeline from Russia to Germany will open anytime soon and bring relief.

The high gas prices of recent months will eventually lead to rises in energy costs for households in Britain and other countries. Analysts forecast that British consumers, who have been protected by price ceilings, could see their energy bills rise more than 50 percent when adjustments are announced early next year.

By the numbers: European natural gas prices have doubled this month and are roughly 15 times what gas is selling for in the U.S. Electrical power prices are also soaring: In Britain, steady power was trading on Tuesday for about 340 pounds, about $450, per megawatt-hour — about three times the average price of electricity over the year.

Inflation woes: A record annual increase in prices, of 4.9 percent in the eurozone last month, is affecting businesses, factories and consumers — right down to the cost of the humble baguette.

What Else is Happening

In an effort to contain the highly contagious Omicron variant of the coronavirus, Israel has barred entry to most international travelers until at least the end of December, leaving the holy sites of Jerusalem devoid of foreign visitors for a second straight Christmas.

Issa Kassissieh, above, a Palestinian Christian and the traditional Santa Claus of the Holy Land, at least brought some Christmas spark to passers-by in the Old City. “Last year, I saw how stressed the children were,” he said. “I saw on their faces that I brought some life back to them.”

The return of ‘Emily in Paris’

With the Netflix show back for Season 2, Jason Farago, a critic for The Times based in Paris, reflects on being just another basic American in the City of Lights. This is a lightly edited extract.

“Emily in Paris” is not trash TV, not some “Real Housewives of Île-de-France.” It’s not even champagne-soaked enough to be escapist. It’s something newer and weirder than those: as insubstantial as a gluten-free meringue from the Bon Marché food hall, so whisper-thin it almost asks you not to watch it, at least not without your phone in your hand.

Is “Emily in Paris” in fact an anamorphic projection of @emilyinparis, Emily’s Instagram account, into moving pictures? That’d explain the total lack of impact 20 episodes of this streaming blancmange have had on me, and how little I care that Emily never gets stuck on the RER or waits in line for a visa renewal.

For compared to “Sex and the City” and “The Devil Wears Prada,” “Emily in Paris” might as well be cinéma vérité, insofar as it shows us the vapidity of the smartphone biographies we all keep compulsively authoring. Some days I wonder if it’s better just to accept that.

What else is there to be done? Insist to your friends (and followers) that Netflix’s Paris is a sham, that you alone have discovered the real city? Is this not the most Emily move of all?

Pomegranate is the star in this deeply spiced chicken dish.

Every scene of Joel Coen’s adaptation of “The Tragedy of MacBeth” is a mini-master class in the craft of acting.

The latest episode of “The Daily” is about the Covid testing crisis.

Tags
New Per That This Ti̇mes

Four people are arrested in India after a man leaves the country using a fake virus test result.

Winner but Not Chancellor — Yet. The Race to Replace Merkel

Polls should close at 5 p.m.