We’re covering a nail-biter German election and reactions to a Chinese-Canadian prisoner swap. 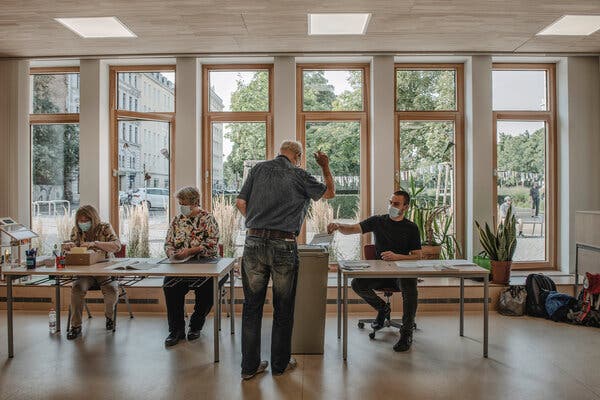 Voting in Leipzig, Germany, on Sunday.Credit…Laetitia Vancon for The New York Times

Early exit polls showed a tight race after Germans voted on a new Parliament. Their choice will determine who succeeds Chancellor Angela Merkel at the helm of the E.U.’s most populous democracy. Here are the latest updates.

The country’s two largest parties, the Social Democrats and Merkel’s Christian Democrats, were either tied or within a percentage point of each other in the polls.

Each of the parties, which have governed together in a coalition under Merkel for 12 of the past 16 years, appeared to fall short of the 30 percent mark. Such a result would represent the first time that Merkel’s party had fallen that low among voters since its founding in 1945.

With many more people voting by mail than usual because of the pandemic, organizers were cautioning that it might take longer than it typically would to count the ballots.

Go deeper: Here’s a primer on Germany’s complex election system, the leading candidates to replace Merkel and the potential coalition governments. Merkel will remain the head of the acting government until a new one is formed.

Legacy: As Merkel steps down after 16 years in her position, she leaves behind a profoundly changed Germany. Our reporter traveled to several cities and saw transformations in climate policy, religious tolerance and diversity.

Meng Wanzhou appears on a screen outside a shopping mall in Beijing on Sunday.Credit…Carlos Garcia Rawlins/Reuters

China welcomed home the Huawei executive Meng Wanzhou, who spent years under house arrest in Canada on fraud charges, with fanfare and hailed her as a hero.

But in the West, the release of two Canadians from jail in China — and the end of a 1,030-day standoff — was viewed with concern, as Beijing was willing to be boldly transactional in its dealings with foreign nationals.

“They’re not even making a pretense of a pretense that this was anything but a straight hostage situation,” said Donald C. Clarke, a law professor specializing in China at George Washington University Law School.

The exchange may help bring tensions between Washington and Beijing back from a point of crisis. But it will likely do little to resolve the deeper issues at play.

Back story: In December 2018, Canadian authorities arrested Meng, the chief financial officer of Huawei and the daughter of its founder, at the request of the U.S. Shortly after, China detained two Canadians, Michael Spavor and Michael Kovrig.

Timing: The swaps came on the same day that President Biden was meeting for the first time at the White House with the leaders of Australia, Japan and India, as part of an effort to build alliances to counter China’s influence.

A Covid vaccination center in Seoul in August.Credit…Im Hun-Jung/YONHAP, via Associated Press

Booster shots to roll out in South Korea

Kim Boo-kyum, the prime minister of South Korea, said on Sunday that the nation would soon start administering booster shots to medical workers and people in their 60s and older as the country battled a new wave of infections after the Chuseok holiday.

Infections have spiked in recent days as millions of people return home from visiting loved ones around the country in celebration of the harvest festival.

Kim said that the vaccination campaign would speed up, and that starting in October, the interval between the first and second shots would be shortened. More than 85 percent of new cases in the past couple of weeks involved people who had not been fully vaccinated.

Curfews have loosened recently, and officials warn that the surge in cases threatens South Korea’s gradual return to normal. But pandemic fatigue is growing.

Details: About 45 percent of the total population is fully vaccinated, and about 74 percent have received one shot. South Korea reported a record 3,273 new cases on Saturday, after hovering near 2,000 cases before the holiday.

Here are the latest updates on the virus and maps of the pandemic.

An Evergrande development in Jiangsu province, China, on Thursday.Credit…Aly Song/Reuters

People line up to vote in Gardabe, Iceland on Saturday.Credit…Brynjar Gunnarsson/Associated Press
First Lt. Sukhbir Toor of the Marine Corps in his backyard overlooking the surrounding Joshua Tree desert terrain.Credit…Mark Abramson for The New York Times

Although some parts of the U.S. military allow exceptions to strict dress rules, the Marines are less likely to budge. First Lt. Sukhbir Toor, who is Sikh, was reluctantly allowed to wear a turban. “I finally don’t have to pick which life I want to commit to, my faith or my country,” Lieutenant Toor said. “I can be who I am and honor both sides.” But he says the force needs to do more.

Wole Soyinka in his home in Abeokuta, Nigeria, which he described as his “sanctuary.”Credit…Yagazie Emezi for The New York Times

Wole Soyinka is not going anywhere

When the first Black winner of the Nobel Prize in Literature — and its first African winner — senses that things like freedom and democracy are under threat in Nigeria, he has to get involved.

“It’s a temperament,” said Wole Soyinka, 87, during an interview in Abeokuta, his hometown in southern Nigeria.

“Chronicles From the Land of the Happiest People on Earth,” his first novel in nearly 50 years, is being published in the U.S. on Tuesday. Set in an imaginary Nigeria, it’s a satire about how the accumulation of power can go awry. (His 1975 play “Death and the King’s Horseman” is also being produced for Netflix by EbonyLife Media, the empire run by Mo Abudu, who has earned herself the unofficial title of “Africa’s answer to Oprah.”)

Boko Haram has terrorized northeastern Nigeria for over a decade. Mass abductions have swept the north. Police brutality has stirred a protest movement. Secessionist groups have attacked government offices.

It keeps bringing Soyinka back to the forefront. “I know, I know, I know. I’ve announced a number of times I’m withdrawing from public life,” Soyinka said. “And I meant it! For about 24 hours.”

This focaccia with herbed-honey plums and prosciutto is delicious as a snack or an appetizer and also as a light lunch when paired with a salad.

The podcast “Aria Code” hopes to extend the appeal of opera to a larger audience.

The director of the movie “Dear Evan Hansen” narrates a sequence from the film, starring Ben Platt.

The latest episode of “The Daily” is on Germany and Europe after Angela Merkel.

Whet Moser wrote the Arts and Ideas section. You can reach Melina and the team at briefing@nytimes.com.

Jonathan Mirsky, Journalist and Historian of China, Dies at 88 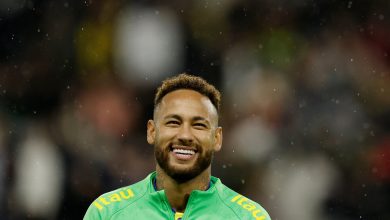 Neymar Is Still a Singular Star, but He Has More Help on Brazil 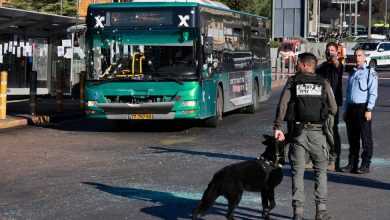 Two Explosions in Jerusalem Kill 1 and Wound at Least 13

The U.S. keeps a wary eye on the French elections.