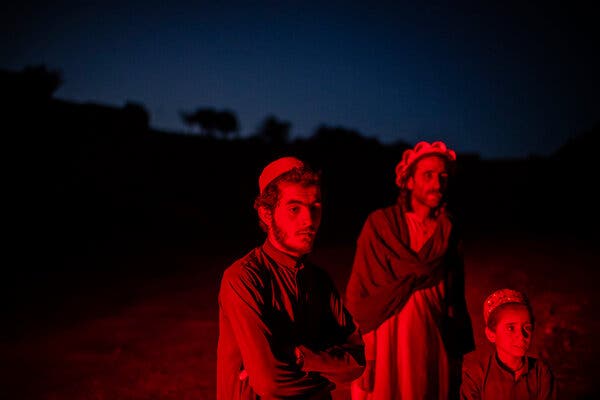 Padshah Gun, whose house was damaged in the earthquake.Credit…Kiana Hayeri for The New York Times

Afghan officials said that rescue efforts were winding down after a 5.9-magnitude earthquake, which struck early Wednesday morning and was believed to have killed more than 1,000 people.

As hope for finding survivors dimmed, Taliban officials called for assistance from aid agencies. The government said that some supplies had already arrived from Iran, Qatar and Pakistan. The U.S., the U.N. and the W.H.O. also took steps to help. South Korea promised $1 million in humanitarian assistance.

The difficult terrain, the weather and the deep poverty in hard-hit areas of Paktika Province, in the remote southeast, pose a particular challenge. The area is also far from many clinics or hospitals that could help the wounded. Here are recent updates and photographs.

Victims: Hawa, a 30-year-old mother, survived with her 1-year-old daughter. Four of her other children died, as did 17 other relatives. “I lost everything, my whole world, my whole family, I don’t have any hope for the future,” Hawa told The Times.

What’s next: The U.N. warned that a lack of clean drinking water and sanitation could bring a cholera outbreak.

After repeated requests to do so, Volodymyr Zelensky, the president of Ukraine, addressed the African Union this week.

Zelensky faced an uphill battle, lobbying leaders who have close ties to President Vladimir Putin of Russia. Many African governments have shied away from condemning Russia, abstaining from U.N. votes condemning the invasion and characterizing it as a war that does not directly affect the continent.

Zelensky zeroed in on economic ramifications for Africa: high food prices caused by the conflict between two of the world’s largest grain producers, which have worsened food insecurity.

“Africa is actually taken hostage,” Zelensky said, according to The Associated Press.

Drought in Somalia and growing food insecurity in the Sahel region have brought into stark focus the consequences of rising food prices, particularly wheat. The rising cost of fuel has further squeezed the continent’s nascent middle class and urban poor.

“They are trying to use you and the suffering of the people to put pressure on the democracies that have imposed sanctions on Russia,” Zelensky said in a video speech.

The response was subdued. Moussa Faki Mahamat, the African Union chairman, reiterated the call for dialogue in a tweet posted after the meeting.

It was in stark contrast to the enthusiastic audience afforded to Putin earlier this month. Pinned to Faki’s Twitter timeline is a photograph of him and President Macky Sall of Senegal meeting with Putin in Sochi. Speaking as the rotating political head of the African Union, Sall called for an end to sanctions against Russia, referring to Putin as his “dear friend Vladimir.”

Fighting: Ukrainian soldiers defended their last pocket of land in the Luhansk region after Russia bombarded a key supply line.

Asia: India defended its soaring purchases of Russian oil yesterday, amid mounting criticism from the West.

Torrential floods in southern China have disrupted the lives of almost half a million people, as rising water submerges cars and houses. In Shaoguan, a manufacturing hub, factories were ordered to halt production with water levels at a 50-year high, state television reported.

In northern and central provinces, heat waves pushed the demand for air-conditioning to record highs. In Henan, cement roads buckled last week as roadside surface temperatures reached as high as 165 degrees Fahrenheit. It resembled the aftermath of an earthquake, local media reported.

Background: China has converted farmlands to cities in past decades, lifting millions of people in rural areas out of poverty. But it has also become the world’s largest polluter, with greenhouse gas emissions exceeding those of all developed nations combined.

Sabyasachi’s lehengas range from $2,500 to $23,000 apiece.Credit…Zishaan A Latif for The New York Times

The lessons of Zen art

My colleague Jason Farago visited “Mind Over Matter: Zen in Medieval Japan,” an exhibition in Washington, D.C. He called it “a show of ravishing absence: a stark and beautiful exhibition where form is plunged into silence, and the ego dissolves into empty space.”

The show at the Freer Gallery of Art — an arm of the Smithsonian’s National Museum of Asian Art — is a good introduction to Japanese painting from the 14th to 17th centuries. Jason, a critic at large, highlighted its contemporary implications.

“Nowadays Zen has become Western shorthand for peace and calm, all too reducible as a lifestyle hack,” he writes. But Zen is the most purified and austere tradition in Mahayana Buddhism. Practitioners seek to empty the mind through meditation (Zen, in Japanese), until one reaches the highest state of consciousness, known as satori.

“For all their beauty, these idealized and streamlined Zen paintings are best understood as the efforts of individual monks to express and to stimulate the no-thought that would reveal even painting as just another part of this cycle of life and death,” Jason writes. “They offer no lesson, or, rather, they offer Zen’s primordial lesson: the lesson of nothingness.”

Kale and Italian sausage punch up this cheesy macaroni meal.

Four writers and one bookseller weighed in on the 25 most significant New York City novels from the past 100 years.

Gen Z has turned to the unpretentious 0.5 selfie, taken with an ultra-wide-angle lens.

That’s it for today’s briefing. See you next time. — Amelia and Lynsey

P.S. Yonette Joseph is moving from Seoul to Mexico City to expand our global editing coverage.

The latest episode of “The Daily” is about a Supreme Court case that could doom U.S. climate goals.

You can reach Amelia, Lynsey and the team at briefing@nytimes.com.

In Afghan Quake: ‘I Did Not Expect to Survive’

Spurred by Putin, Russians Turn on One Another Over the War

A Tale of Culinary Reconciliation, Beside the Eiffel Tower