When Russia invaded Ukraine, Valentyna Vereteska, 31, did not even pack clothes or other belongings. She and her 11-year-old daughter fled their hometown, Mykolaiv, which has since come under Russian bombardment.

They waited at the Polish border for 15 hours in frigid temperatures, with limited access to food, she said, before being able to cross.

Ms. Vereteska’s ordeal mirrors those of millions of Ukrainian refugees, but it has a unique postscript: On Friday, she crossed another marker, winning the women’s race at the Jerusalem Marathon — and finishing behind just two men — with a time of 2 hours, 45 minutes and 54 seconds.

To say the feat seemed unlikely several weeks ago would be an understatement.

Her home in Mykolaiv has been destroyed, she said, and the war had made her depressed and she was unable to train.

But she longed to get back to the sport she loves, so she got in touch with officials from the Jerusalem Marathon and was able to get a spot in the event less than two weeks in advance.

She was shocked by her victory, Ms. Vereteska said in an interview, especially because she was only recently able to resume training — in clothing and shoes collected by her Polish host family.

This was the fourth marathon she had run. Before the war, she had placed first in a marathon in Albania on Oct. 17, and she came in third in the Gutenberg Marathon in Mainz, Germany, in May 2019, according to the World Athletics website.

She said she thought about the war throughout the Jerusalem race, and those thoughts fueled her victory.

“I’m stressed, of course I’m nervous about everything that’s happened in Ukraine, but it helped me,” she said of thinking of her home country, adding, “It was a very difficult race, it was very hilly, really very hilly.”

The relatively slow winning times reflected the challenging course, which features a handful of steep climbs. Friday’s conditions did not help matters: it was windy and chilly with occasional rain. Ageze Guadie won the men’s race in 2 hours, 37 minutes and 17 seconds.

Ms. Vereteska said her win made her smile for the first time since the war started. “This victory is for peace, for peace, in my country, and not only in my country — for peace in all the world.”

She is unsure of what’s next. She worries about her husband and family in Ukraine, and longs to go home. But for now, she plans to head back to Krakow to reunite with her daughter.

She’s already eyeing her next marathon, perhaps in Mainz, Germany, in May.

Where Is Germany in the Ukraine Standoff? Its Allies Wonder. 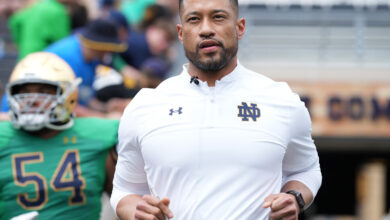 Marcus Freeman is 36. He’s Also in Charge at Notre Dame.