PARIS — Perhaps 10 years ago, over a late dinner at la Porte d’Auteuil after a long day of covering matches at Roland Garros, I remember agreeing with Philippe Bouin, the great French tennis writer for L’Équipe, that if the French Open ever chose to join other Grand Slam tournaments and stage night sessions, it would be the right time to move on to other pursuits instead of filing stories long after midnight and missing any chance at a last-call bistro meal.

There are certainly bigger issues in tennis, but Bouin more or less kept his word, retiring long before the French Open adopted its “sessions de nuit” in 2021. But I’ve kept coming, and there I was bundled up in a nearly full stadium as Tuesday turned into Wednesday and May into June as Rafael Nadal finished off Novak Djokovic in their stirring quarterfinal at 1:15 a.m. 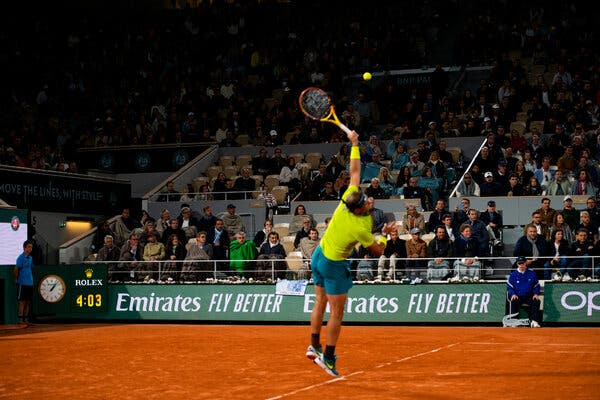 There I was, too, walking out of Roland Garros a couple of hours later and — with no public transport available — observing a few French fans still trying in vain to hail a taxi or book a ride.

Night sessions have their upside in tennis, no doubt: electric atmosphere, prime-time coverage (depending on one’s time zone) and a chance for fans who work during the day to attend in person.

Fans did the wave during a night match between Marin Cilic and Daniil Medvedev on Monday. Credit…Pete Kiehart for The New York Times

But the new night sessions at Roland Garros, created above all to increase profits for an event that trails the other the Grand Slam events in domestic television revenue, also have had plenty of downsides. That is largely because the French decided to do them their own way by scheduling just one match in that slot instead of two, the usual offering at other Grand Slam events.

Guy Forget, the former French Open tournament director who was part of that decision, said it was made “so matches would not end at 3 a.m.”

Ball kids watching the end of a match between Alizé Cornet and Jelena Ostapenko from a camera pit.Credit…James Hill for The New York Times

Wimbledon remains a holdout on night sessions (grass gets even more slippery after sunset). But the U.S. Open and the Australian Open, which have had night sessions for decades, usually schedule a men’s singles match and a women’s singles match, and there have been a few all-nighters along the way, including a Lleyton Hewitt victory over Marcos Baghdatis at the 2008 Australian Open that ended at 4:34 a.m. (It was quite a sunrise on the way back to the hotel.)

That has been problematic in terms of value for money — is one blowout in the chill, like Marin Cilic’s rout of Daniil Medvedev — worth well over 100 euros a ticket?

It also has been problematic for gender equality. The 10 Roland Garros night sessions this year featured just one women’s match: the Frenchwoman Alizé Cornet’s victory over Jelena Ostapenko of Latvia. It was the same ratio last year, when the tournament debuted the night sessions, with no fans on nine of 10 nights because of the coronavirus pandemic.

Djokovic serving during his match against Yoshihito Nishioka of Japan.Credit…James Hill for The New York Times

The disparity has continued even though Amélie Mauresmo, a former WTA No. 1 from France, is the new French Open tournament director. Pressed on the issue on Wednesday, the morning after the Nadal-Djokovic duel, Mauresmo displayed clumsy footwork, saying that, as a woman and a “former women’s player,” she did “not feel bad or unfair saying that right now” the men’s game was generally more attractive and appealing than the women’s game.

Mauresmo said her goal after the draw came out was to try to find women’s matches that she could put in that showcase nighttime slot. But she said she struggled to find the marquee matchups and star power she was seeking. Women’s matches are also typically shorter with a best-of-three-sets format, compared with best of five for the men.

A group in the crowd with a drum and trumpets and a portrait of Cornet roused the crowd during a break.Credit…James Hill for The New York Times

“I admit it was tough,” she said. “It was tough for more than one night to find, as you say, the match of the day,” she said, sounding somewhat apologetic.

Iga Swiatek, the 21-year-old Polish star, did not get a nighttime assignment despite being the new No. 1 and a former French Open champion.

“It is a little bit disappointing and surprising,” Swiatek said of Mauresmo’s comments after running her winning streak to 33 singles matches on Wednesday with a 6-3, 6-2 victory over Jessica Pegula, an American. She added that it was more convenient for most players to compete during the day, “but for sure I want to entertain, and I also want to show my best tennis in every match.”

Ostapenko discussing a line call with an umpire.Credit…James Hill for The New York Times

In a text message, Steve Simon, the WTA chief, expressed disapproval with the nighttime scheduling and with the fact that women’s matches were usually picked to be the opening match on the two main show courts during the day sessions: a time slot in which crowds and viewership are often smaller.

“The generation and depth of talent we are currently witnessing in the sport is incredible,” he said. “Our fans want to see the excitement and thrill of women’s tennis on the biggest stages and in the premium time slots. There is certainly room for improvement, and if we want to build the value of our combined product, then a balanced match schedule is critical in providing that pathway.”

A D.J. performed to warm up the crowd at Philippe Chatrier Court in a nighttime showcase marketed as “D.J. Set and Match.” Credit…James Hill for The New York Times

The WTA was short on superstar power at Roland Garros with the surprise retirement of top-ranked Ashleigh Barty in March, the first-round defeats of Naomi Osaka and the defending French Open champion, Barbora Krejcikova, and the continued absence of Serena and Venus Williams, who have yet to compete this year.

But the one-match nighttime format also made it difficult to showcase Swiatek, who is winning most of her matches in a hurry at this stage. “The amount of playing time is certainly a factor,” Mauresmo said in a text message.

Why not simply schedule two matches, or two women’s matches, at night to guarantee enough entertainment? Because, according to Mauresmo, the night-session broadcast contracts from 2021 through 2023 stipulate that there be just one match.

Nishioka stretching for a shot during his match against Djokovic.Credit…James Hill for The New York Times

“Impossible to change that,” Mauresmo said. “But we still will talk with our partners to think of other possibilities that could satisfy ticket holders.”

That sounds like a fine idea, as does starting earlier than 8:45 p.m., even with a single match, if the idea is to spare players too many late nights and avoid irking the neighbors in the leafy and peaceful suburb of Boulogne, which was another reason for the one-match concept.

The bigger issue in France is accessibility. Amazon Prime Video, the internet broadcaster that purchased the night-session rights here, has a small footprint compared with the traditional public broadcaster. And yet it is supposed to get the marquee match even if the contract, according to L’Équipe, allows the French Open organizers the final say.

But there was no doubt about the marquee match on Tuesday, and though Amazon Prime agreed exceptionally to allow free access to its service to viewers in France, the decision to schedule Nadal and Djokovic’s quarterfinal at night sparked debate and anger.

“The French Tennis Federation’s decisions shocks me profoundly,” Delphine Ernotte, president of France Televisions, told Le Figaro. “It’s a low blow to our partnership after we have broadcast and popularized the event for years.”

To have the matchup of the tournament end at 1:15 a.m. on a weeknight surely was not great for viewership in France, either. And though the atmosphere was still transcendent inside the main stadium after midnight, there was a price to pay on the road home.

French Open organizers have yet to reach an agreement with the Parisian authorities to keep public transport operating after very late finishes.

The Métro was closed, and so — as Bouin and I feared long ago — were the bistros.

The W.N.B.A. Strikes an Uneasy Silence Over Brittney Griner

An Australia Homecoming, Mixed With Yearning and Trepidation

War Brings Out Solidarity and Defiance in Ukrainians Who Remain