“I was so paranoid, I made him get a negative Covid test,” Shiffrin said, laughing as she sat in her Colorado home late last year. “Romantic, huh?”

They met for a walk but remained six feet apart — with masks on.

“I thought: This is a really awful way to start anything,” Shiffrin added. “But he was good with it; he was superchill. And you know, we had a good time.”

Months earlier, Kilde, who is a multiple gold medal contender at this month’s Beijing Olympics, had reached out remotely in a more affecting way. Cognizant that Shiffrin was still struggling with her grief over the 2020 accidental death of her father, Jeff Shiffrin, Kilde sent a note offering to listen if she wanted someone to talk to.

When the race season ended last spring, Kilde accompanied the Shiffrin family — Mikaela’s mother, Eileen, who is also her daughter’s coach; her older brother, Taylor; and his future wife, Kristi — on a beach vacation to Maui. The couple went public with their relationship in early summer, followed by social media posts of the pair cycling across the Brooklyn Bridge while in New York for the ESPYs.

Shiffrin, who turns 27 next month, likes to spend most of her free time training close to her home in Colorado, and Kilde, 29, joined her, doing leg weight training against the backdrop of the Rocky Mountains.

“The guy can squat a house, it’s hard to keep up,” said Shiffrin, who got revenge with a unicycling challenge in a neighborhood cul-de-sac. (Shiffrin has been balance training on a unicycle since she was a child.)

“We make each other better and learn from each other as skiers,” Kilde said in December after winning two World Cup races in Beaver Creek, Colo. “But mostly, what matters is that I enjoy spending time with her. As I’ve said many times, basically it’s just a bonus that she’s a skier.”

Those closest to Shiffrin consider her relationship with Kilde a turning point in the recovery from her father’s death.

“Mikaela had gotten to a point where she had just shut it all down,” Eileen Shiffrin said. “After Aleks, I felt Mikaela had something to wake up for. She had optimism, she laughed again. It was wonderful to see. She looked forward to what was coming next, and that included her skiing.”

When Shiffrin returned to on-snow practices, teammates and coaches on the United States ski team each saw the same thing: a light had returned to her eyes.

“Because Aleks has such a passion for skiing it reminded me that I had to stop just going through the motions on the hill and rediscover my passion for skiing,” Shiffrin said, sitting at home beneath a wall that displayed just some of her 22 World Cup season-title globes and world championship medals. “Watching Aleks, I didn’t want to go through the motions anymore. I wanted to love skiing again.”

Kilde downplayed his role in Shiffrin’s revival, which has her atop this season’s World Cup overall standings. He instead noted that she helped him in his rehabilitation from surgery after he tore his right anterior cruciate ligament in January, 2021.

“We do each have experiences that are unique to ski racers,” Kilde said, “and we can share those and have conversations that you can’t really have with anyone else. But she inspires me, that’s all I’m saying.”

Kilde will be the favorite in the men’s downhill and super-G in Beijing. Shiffrin hopes to compete in each of the five individual women’s Alpine events, and will be a medal contender in four with a chance to win multiple golds. She has won four times this season in slalom and giant slalom (with four second-place finishes) and twice has been third in the super-G. Shiffrin will be the favorite in the women’s combined, which is one run of downhill and one run of slalom. The event has not been contested on the World Cup this season but it plays to Shiffrin’s versatility as an accomplished speed event skier and her unmatched record of 47 World Cup career slalom victories, the most of any racer, male or female.

Kilde of Norway during a downhill training run in Beijing on Friday.Credit…Guillaume Horcajuelo/EPA, via Shutterstock

In a phone interview from Austria last month, Shiffrin said she and Kilde had compared notes about how to best peak for the Games. Those conversations have primarily focused on their mental preparations. Shiffrin has also been seeing a sports psychologist since last summer.

“It’s more about accepting the pressure that will be there rather than trying to run from it or deny it,” she said.

Shiffrin acknowledges she will be the American face of the Olympics.

“I much prefer that than going to the Olympics feeling that nobody’s counting on me because I’ve been skiing really, really slow,” she said with a muffled chortle. In fact, Shiffrin could set records for most career Alpine gold medals by an American or most Olympic Alpine medals for a woman.

The 2021-22 race season began for Shiffrin in October with a victory in Solden, Austria. At the finish, after waving to a cheering crowd, she seemed surprised when she spotted Kilde behind a waist-high fence. Beaming, Shiffrin dashed over for a hug and kiss.

The two have not seen each other regularly since. The men’s and women’s World Cup racing circuits do not intersect as they hopscotch across Europe and Scandinavia.

But on Monday, Shiffrin posted a picture on her social media accounts of her and Kilde inside the Beijing Olympic Village.

“Reunited,” Shiffrin wrote above the picture, which shows Kilde with his left arm extended and his left finger bent downward so it just barely touches Shiffrin’s right arm beneath a jacket and long-sleeved shirt.

Beijing Wanted the Winter Olympics. All It Needed Was Snow.

On Spain’s Camino de Santiago, Even Óscar the Donkey Is a Pilgrim

N.C.A.A. Tournament: What to Watch as the Final Four is Determined 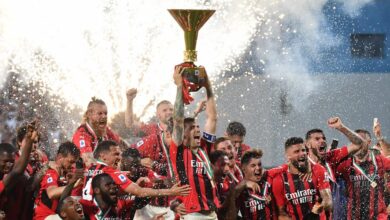