Estrella has long, wavy, jet-back hair. She tries to tame it with a thick-toothed comb in the backyard of her house, among the chickens, hammocks and looms. All around her, relatives come and go.

It is November 2015, and Estrella is preparing for the annual festival called La Vela de las Auténticas Intrépidas Buscadoras del Peligro, or the Festival of the Authentic and Intrepid Danger-Seekers. There, alongside a community of fellow muxes — people who are born male but who adopt roles and identities associated with women — she will vie to be crowned the queen of the ceremony. 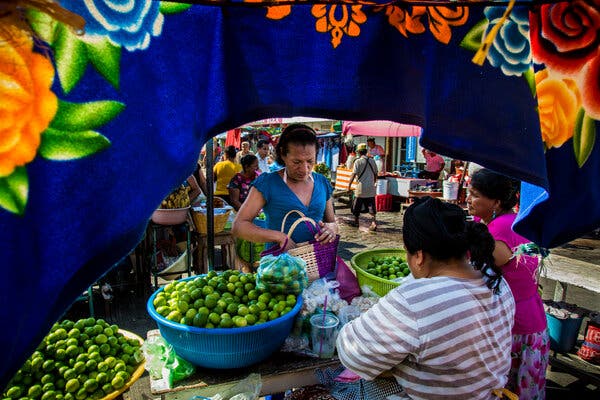 Marysol in the village market, which she visits each day to buy provisions for her small canteen, where she sells beer and snacks.

Estrella and her family live near the town of Juchitán de Zaragoza, on the Isthmus of Tehuantepec, in the southern Mexican state of Oaxaca. As Zapotecs, an Indigenous people of Mexico, they are part of a community that has long accepted — and celebrated — the muxes (pronounced MOO-shays), who are broadly considered a third gender.

Many (though not all) muxes assume roles within Zapotec society that are traditionally associated with women; they cook, embroider garments, work as hairdressers, complete household chores, care for children and elderly relatives. Estrella is among them: Alongside other interests, she designs the elaborate embroidery of traditional Zapotec dresses, full of flowers and other natural elements that flood every celebration or festivity on the isthmus with color.

Fernanda makes dinner for her and her mother.

“At the age of 5, my mother began to notice how I dealt with household matters,” Estrella explains. “I washed the dishes, the clothes; I always wanted to help her. But my dad wouldn’t let me, and so I did it in secret.”

Whenever her father left the house, she would put on her sisters’ clothes and dance around the room, she says — but, when he returned, “the dream was over, and the spell was broken.”

A portrait of Kazandra.
Displaying her ornate necklace.

According to sociologists, the concept of a different or third gender has existed in several Indigenous societies in North America, including among the Crow people, the Apache and several other Native American groups.

Anthropologists have also noted the acceptance of gender fluidity in pre-Columbian Mexico, citing accounts of cross-dressing among Aztec priests, as well as Mayan gods who were simultaneously male and female.

Despite centuries of colonization and Christianization, which wiped out many such attitudes, some tolerance for gender nonconformity has survived within the cultures of the Indigenous communities of the Isthmus of Tehuantepec.

Naomy selects jewelry to wear with a traditional dress.
Estrella showcases one of her gowns.
Estrella is especially interested in traditional Zapotec designs.

I first learned about Mexico’s muxes after working on a series of projects about gender identity in Cuba and Brazil. My first visit to Juchitán, in 2014, coincided with a series of festivities, during which seemingly everyone I encountered — young, old, men, women, muxes — danced, ate and drank in celebration. The days were long and intense, full of joy and euphoria. It was there, surrounded by the revelry, that I made my first acquaintances with the muxes.

When boys express effeminacy, some Zapotec mothers will begin to train them in traditional female roles. Similarly, many mothers do not disavow young men who show an interest in work traditionally assigned to women.

Notably, muxe children are traditionally forbidden from leaving their parental homes to start their own families, or to live independently with their partners. Even here, tolerance and acceptance, it seems, have their limits.

A young neighbor takes an interest in Kazandra’s shoes.

Aiming to help her mother, who was burdened with debt, Estrella decided to quit school at a young age and support her siblings’ education. She assists her mother at the market. When not teaching dance classes at school, she gives private lessons in preparation for quinceañeras,15th-birthday celebrations that serve as rites of passage for girls in many Latin American countries. She also designs and embroiders dresses and takes care of household chores.

Naomy participates in a parade called the Regada.

But on the day I spend with her in late November 2015, she isn’t working. It is the day of the Vela, and she spends her time preparing for the celebration. She plans to wear her best clothes and parade along with the other muxes, some of whom were crowned queens during previous festivals.

That night, Estrella is visibly nervous. Her voice trembles, and she is afraid her legs will fail her. She wants to look perfect, she says, and shine like a star — if only for a few minutes.

She chooses a modern dress, opting to expose one of her shoulders. She lets her hair down.

Thousands of people gather for the Vela, from Oaxaca and beyond. Costumed celebrants dance to live music through the night, drinking beer and eating traditional Juchitán food.

Estrella is happily surrounded by her friends. But what matters to her most is that her mother has joined her at the Vela — as she does, she tells me, at all of the parties she attends.

Estrella and her mother attend the birthday party of a fellow muxe.

Australia Took On China. Did It Get It Right?

Berrettini Out of Wimbledon as Coronavirus Enters the Draw

N.C.A.A. Women’s Tournament: What to Watch as the Field Narrows to 16

Shades of 1986: Mets and Yankees Close April on Top