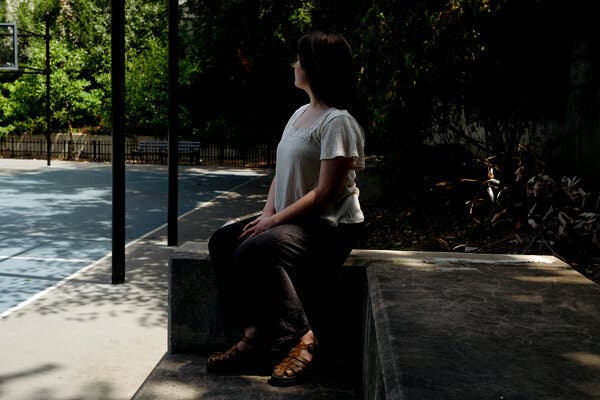 Meghan was assaulted in a park in Bushwick, Brooklyn. The police asked her to call her attacker, she said.Credit…Laylah Amatullah Barrayn for The New York Times

Rape survivors and advocates for victims spent years pushing city and state officials to do something about the New York Police Department’s handling of sex crimes, but problems in the Special Victims Division remained unaddressed. The survivors turned to the Justice Department, which announced an investigation in June. I asked Ashley Southall, The New York Times’s police bureau chief, to explain some of the issues raised by the victims.

Suspects were identified more than 80 percent of the time, but a research firm hired by the Police Department found that more than half of sexual assault cases were closed for lack of evidence. If the police had potential suspects, why didn’t they pursue them?

In most cases, the issue isn’t whether sexual contact occurred but whether it was consensual. The police interpret that as “he said, she said.”

In such cases, the police often rush victims into what’s called a controlled call. Essentially, the goal is to get the suspect on the phone and see if he will say something incriminating.

Also, there’s evidence that police often fail to seek out and collect, like surveillance video and witness accounts.

Many of the victims meet their attackers in public places — bars, bodegas, parks, stores — so there’s often no witness or footage that could shed light on whether a victim was in a state to consent. If she appears to be unable to walk or she’s being dragged, that raises doubt that she could consent to sex.

A number of victims also took cabs before they were assaulted, but those drivers are rarely interviewed.

Victims said their cases were assigned to officers who did not know how to investigate them or didn’t bother. You interviewed a victim who said that Special Victims detectives insisted she call her assailant, who had raped her in a park in Bushwick. Why, and what happened after that?

That victim, who allowed us to use her first name, Meghan, didn’t feel comfortable making that call. The man was someone she had just met at a bodega. He somehow got her number afterward and had been calling her, so she was terrified on top of the trauma of having been violently raped.

Making the controlled call was the only option the detectives gave Meghan, and she said no.

They hadn’t knocked on any doors to see if anyone living around the park heard her scream. The friend who sent Meghan home in a cab wasn’t interviewed, and neither was the driver. Instead, the investigators closed the case until DNA test results came back on the clothing that Meghan was wearing when she was attacked.

By that time, she had learned that she was pregnant by her attacker and had decided to have an abortion. In fact, when the detectives called, she was in a clinic waiting room. They wanted her to delay the abortion so that they could collect fetal DNA.

Meghan felt she couldn’t wait any longer or undergo another invasive procedure that wouldn’t prove she was raped. So she said no, and they closed the case again, labeling her “uncooperative.”

The Police Department’s inspector general issued a report blaming police officials for failing to deal with a unit that was understaffed and overwhelmed. That was in 2018. What happened after that?

Mayor Bill de Blasio threw his support behind the Police Department and followed his commissioner’s lead in casting doubt on the report’s accuracy.

The Police Department increased the unit’s staffing, but it did so by taking shortcuts. Instead of hiring seasoned detectives, the department brought in officers from patrol who had no investigative experience.

Though de Blasio eventually acknowledged the questions the report raised were fair, he was so convinced that the department was improving Special Victims that he made the official in charge of those changes, Dermot Shea, his police commissioner.

What we have seen since then is a decline in experience and a lot of turnover among supervisors. At least 10 have left or been forced out of the division. The share of cases that are solved with an arrest or closed because of circumstances out of investigators’ control has fallen. And we continue to hear from victims who reported their assaults to police — and whose accounts suggest that the division is still troubled. Two reached out to me after we published my story last week.

How is City Hall, with a new mayor who is a former police captain, reacting now?

Fixing the Police Department’s response to sexual violence is not only a matter of public safety, but also one of equity that primarily affects women who are Black or Hispanic. And he pitched himself as the former cop who would make us all safe.

Adams, when he was still Brooklyn borough president, was among those who criticized a police commander in 2017 for saying that rapes involving co-workers or Tinder dates were not “total abomination rapes,” in contrast to cases where a stranger drags a woman off the street.

That remark tipped off the city investigation that made all of these issues public. The resulting report fueled the advocacy that ultimately brought in the Justice Department. And this isn’t something that Adams wants the federal government to sue the city over.

Expect showers during the day with a high in the upper 70s. The evening will be partly cloudy with temperatures in the low 70s.

In effect until Aug. 15 (Feast of the Assumption).

Masih Alinejad, an Iranian American journalist, has been an outspoken critic of Iran’s government.Credit…Cole Wilson for The New York Times

The 2,000 speed cameras near schools in New York City will go into round-the-clock operation today — or, more precisely, tonight.

Until now, the cameras have been switched off at 10 p.m. each weeknight and not turned on again until 6 a.m. the following morning. They have been off entirely on weekends.

Now, because state lawmakers recently broadened the city’s power to enforce traffic regulations, the cameras can run all day, every day. Last year, working only 16 hours a day, the cameras were responsible for 4.37 million tickets, up from 1.29 million in 2017.

City officials including Mayor Eric Adams consider speed cameras (and the $50 fines) a deterrent that saves lives. When Gov. Kathy Hochul signed the bill allowing 24/7 speed cams, Danny Harris, the executive director of Transportation Alternatives, a bicycle and pedestrian advocacy group, said that “proven tools to stop speeding drivers belong in every neighborhood, every hour of the day, every day of the week.”

In all, 143 people have been killed in crashes on city roads this year — the same as last year, although nine fewer pedestrians have died in 2022 than in 2021. This year’s toll includes two more bicyclists, four more people in motor vehicles and three more people on motorized vehicles other than motorcycles.

I was on my way home from work. I got off at my stop, Queens Plaza, and was walking down the platform when I saw someone with dozens of balloons trying to get onto the train.

The doors were starting to close, and the person at the other end of the balloons was struggling to pull them inside in time.

I rushed over and bapped all of the balloons into the car — Bap! Bap! Bap! — like I was playing a game of Whac-a-Mole.

There were so many balloons that I couldn’t see who was holding them, and they couldn’t see me. The doors closed and the train pulled away. I walked all the way home with a huge smile on my face.

Glad we could get together here. See you tomorrow. — J.B.

P.S. Here’s today’s Mini Crossword and Spelling Bee. You can find all our puzzles here.

Melissa Guerrero, Ashley Shannon Wu and Ed Shanahan contributed to New York Today. You can reach the team at nytoday@nytimes.com.

Tags
Off Poli̇ce She That Who

Tumbling down his own landslide: How Boris Johnson lost his invincibility.

No New Taxes, but Plenty to Fight Over in New York’s Looming Budget

U.K., Eurovision Runner-up to Ukraine, Will Host Song Contest in 2023