Gov. Kathy Hochul of New York easily fended off a pair of Democratic primary challengers on Tuesday to win her party’s nomination for a full term, cementing her status as the state’s top Democrat less than a year after she unexpectedly assumed one of the nation’s most powerful governorships.

Ms. Hochul’s runaway victory sets the stage for what could be a grueling general election challenge. Republicans believe they may be able to capitalize on New Yorkers’ discontent over skyrocketing living costs and elevated crime to make a run at winning the governor’s mansion for the first time in two decades.

Their own primary contest was too close to call Tuesday evening. Four Republicans are competing for the nomination: Representative Lee Zeldin, Rob Astorino, Harry Wilson and Andrew Giuliani.

With that fight looming, Democratic primary voters on Tuesday chose Ms. Hochul, a middle-of-the-road incumbent who spent the campaign’s final weeks casting herself as a steady protector of the state’s liberal values, especially after a pair of landmark Supreme Court rulings on guns and abortion rights.

“Everything’s on the line,” Ms. Hochul said earlier on Tuesday, as she sought to turn out voters on Manhattan’s Upper West Side. “This state could fall into Republican hands. A number of the top candidates for governor have already said they have an anti-choice, anti-women agenda. That’s what we’re fighting against.”

The race was called by The Associated Press 25 minutes after the polls closed in New York.

Ms. Hochul, 63, only came to power last August, when Andrew M. Cuomo resigned as governor in the face of sexual harassment allegations. A Buffalo native in a party dominated by New York City Democrats, she had spent much of her career toiling in relative obscurity, briefly as a congresswoman from western New York and for nearly six years as Mr. Cuomo’s little-known lieutenant governor.

She moved quickly after taking office to assemble a political campaign, and by early this year, there appeared to be little doubt that she was the front-runner in a three-way Democratic primary. She won the endorsement of nearly every major Democrat, vastly outspent her opponents and leaned heavily on the powers of the governorship to try to ingratiate herself with key voting blocs across the state.

Ms. Hochul has also proven to be a tireless and effective fund-raiser: The governor, who had already collected roughly $34 million in political donations as of late last week, has set a target of raising a total of $50 million to $70 million by Election Day, according to three Democrats familiar with her plans.

Tuesday’s vote was a vindication for Ms. Hochul and her center-left approach to governance.

The governor was determined to convince Democratic voters that she was a steady presence for a government buffeted by scandal. She portrayed herself as a protector of liberal values at a time when federal abortion rights are under threat and gun violence has shaken New York and the country. And she took pains to balance the concerns of Black and progressive lawmakers and New Yorkers fearful of crime when pushing to enact a set of modest changes to the state’s bail laws this spring.

Still she had to withstand aggressive critiques from Mr. Suozzi on her right and Mr. Williams on her left, who argued that she was doing too little to address soaring housing prices or rising crime and portrayed the governor as another creature of Albany’s corrupt establishment.

Both candidates relentlessly attacked her decision to spend hundreds of millions of taxpayer dollars on a new stadium for the Buffalo Bills. The governor also found herself defending the appointment of Brian A. Benjamin as her first lieutenant governor after he was indicted on federal bribery charges this spring. Mr. Benjamin later resigned.

Those issues are likely to resurface with even greater intensity in the general election.

Still, there were warning signs in Tuesday’s vote for Ms. Hochul, as well. While she cruised to victory statewide, Democratic turnout slumped, especially in Black- and Latino-heavy New York City areas where Ms. Hochul may need to generate enthusiasm to win this fall. 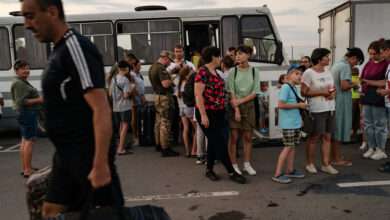 Sea Turtles Found Stabbed in Japan, but Charges Are Unlikely