NORTH MITROVICA, Kosovo — Hoping to ease the bad blood that flows on both sides of the river that divides their city in northern Kosovo, ethnic Serb and ethnic Albanian artists joined forces to paint cheery murals over abusive graffiti daubed on the concrete pillars of the main bridge.

Vulgar insults of Albanians on the northern, Serb side of the river and anti-Serb curses on the southern, mostly Albanian side disappeared under brightly colored flowers and art work.

The happy makeover survived just a few weeks. The bridge, guarded around the clock by police officers from Italy, is now again daubed with ethnic slurs on both banks of the Ibar River, testimony to the toxic identity politics that plague Kosovo and that have increasingly flared into violence in recent months.

On a visit to the Mitrovica bridge last week, Milan Dobric, an ethnic Serb activist who helped organize the mural project, looked with despair at the defacing of his handiwork.

Serb and Albanian artists “got to hang out with each other and make friends on the other side of the river.” But, he said, “we changed nothing in the big picture.” Many people in Mitrovica, whether Serbs on the north bank of the river or Albanians on the south, “will always hate and blame each other,” Mr. Dobric added.

Kosovo, freed from Serbian control by a NATO bombing campaign in 1999, has been at relative peace for more than two decades. The violent ethnic animosity that sent hundreds of thousands of ethnic Albanians fleeing for their lives when Serbia ruled Kosovo, and then left many Serbs subject to revenge attacks after the 1999 NATO bombing, has mostly subsided.

Ethnic Albanians can walk across the bridge into North Mitrovica and ethnic Serbs can cross the other way without getting beaten up, though few do. Ordinary people, when they interact across ethnic lines, mostly get along.

But underlying tensions, rooted in disputes over the status of Kosovo, which declared itself an independent state in 2008 but which Serbia insists is still part of its territory, are bubbling to the surface, particularly in the north.

In North Mitrovica, a gloomy Serb-controlled enclave blighted by power cuts, organized crime and deep foreboding over the future, bedraggled Serbian flags dangle from lampposts and murals scream defiance of Kosovo’s right to exist as a separate state. “No surrender!” they vow.

Serbia insists that Kosovo is still part of its territory. Credit…Armend Nimani for The New York Times

Hospitals, schools and many pharmacies in the city are funded and controlled by the government in Belgrade, Serbia’s capital. Shops all take Serbian dinars while the rest of Kosovo uses the euro. North Mitrovica gets its electricity from Kosovo but has not paid its bills for years.

Kosovo runs the city’s police force and courts, even on the northern side, though shadowy self-defense groups funded by Serbia still play a menacing, if mostly hidden, role. Sidewalks around the northern part of the city are stenciled with a message from one of these groups, the Northern Brigade: “Don’t worry. We are here and waiting.”

“They want a state within a state,” complained Albin Kurti, Kosovo’s prime minister, whom many in the north scorn as an Albanian nationalist bent on driving out his country’s Serb minority. “Their support is decreasing but they are radicalizing,” Mr. Kurti added in an interview, citing a recent spike in tensions that in late July led to protests and gunfire.

The immediate trigger was an arcane dispute over car license plates, which started when Mr. Kurti’s government in Pristina, the capital of a country that most Serbs say does not exist, ordered that all vehicles have Republic of Kosovo plates and ditch those issued by Serbia.

“They want a state within a state,” complained Albin Kurti, Kosovo’s prime minister, about his country’s Serb minority. Credit…Armend Nimani for The New York Times

The rules were originally meant to go into force on Aug. 1 but were postponed for a month after ethnic Serbs, some of them armed, set up barricades, sounded air raid sirens and began firing warning shots along Kosovo’s northern border with Serbia.

To avoid a repeat of that on Sept. 1, the new start date for the order, authorities in Pristina gave residents with Serbian plates two months to re-register their cars before police would start impounding noncompliant vehicles.

Milan Radojevic, the ethnic Serb mayor of North Mitrovica, which has its own administration funded by the Serbian government in Belgrade despite being part of Kosovo and is run separately from the rest of the city on the other side of the river, said, “We want to avoid trouble but we need to defend our way of life and identity.”

Giving up Serbia-issued car plates, he added, would mean abandoning that and “no Serb will ever accept Kosovo as an independent country.” His own vehicle, which has Kosovo plates, he added, came with his job so does not signify any readiness to give up on Serbia.

A 2013 agreement between Kosovo and Serbia promised majority-Serb municipalities a measure of self-rule through the establishment of an ill-defined governing body covering North Mitrovica and nine other mainly Serb towns.

But allowing that, said Mr. Kurti, the prime minister, “would ruin our country” by copying the example of Bosnia, where a self-governing ethnic Serb enclave, Republika Srpska, has crippled the central government. “They want to turn us into a failed state,” he said.

The armed standoff at the border in late July, albeit short-lived, shattered years of work to foster peaceful coexistence.

Mr. Kurti dismissed the whole furor over license plates as a nonissue whipped up by politicians in Belgrade and Serb enclaves in Kosovo to rally support from their nationalist base. The vast majority of ethnic Serbs in Kosovo, he added, already had identity cards issued by his government, so why all the fuss over car plates?

At a recent meeting with Aleksandar Vucic, the president of Serbia, Mr. Kurti told him: “This is crazy. We are leaders. We are supposed to discuss big issues, not license plates.”

The two leaders, under pressure from the European Union and the United States to curb tensions, resolved a long-running dispute over identity documents last month but made no progress on car plates.

A mural of Serbian soldiers under a Serbian flag in Mitrovica, with the slogan, ” This country is worth dying for.”Credit…Armend Nimani for The New York Times

Making that seemingly trivial issue so intractable, according to Milos Milovanovic, a program director for New Social Initiative, a research group in Mitrovica, is “the problem of identity” left unresolved since NATO broke Serbia’s grip on Kosovo in 1999. “The conflict is still fresh because the conflict never really ended,” he added.

Igor Simic, the deputy head of Srpska Lista, the dominant political force in the north, which takes orders from Belgrade, accused Mr. Kurti of playing with fire by trying to force ethnic Serbs to embrace his country.

“We are living here and we will not give up. We are not Kosovo Serbs but Serbs. We are what we are and don’t want to be something else. It is simple. I’m not ready to change my identity,” Mr. Simic said in an interview.

Even moderate ethnic Serbs critical of Mr. Simic’s Belgrade-controlled party voice outrage over what they see as a sneaky maneuver by Pristina to force them to identify themselves as Kosovars and essentially recognize Kosovo as a state by putting new plates on their cars.

“We are living here and we will not give up. We are not Kosovo Serbs but Serbs,” said Igor Simic, the deputy head of Srpska Lista, the dominant political force in the north. Credit…Armend Nimani for The New York Times

Marko Jaksic, a former city councilor in North Mitrovica who gave up politics after the 2018 assassination of the Serb community’s main opposition leader, works in the south of the city, has a Kosovo ID card and said he gets on well with his ethnic Albanian colleagues. But he still resents being forced to publicly declare his allegiance to Kosovo as a state.

“Nobody can see your identity card in your pocket but everyone sees what you have on your car. The last link we have to Serbia is our car plate,” he said. The aim, he added, “is to get us to leave,” just as Serbia forced ethnic Albanians to take flight in the 1990s.

But unlike then, when Serbia had a monopoly on permitted violence through its control of police and military forces in Kosovo, neither community today has full control of the guns, the most powerful of which are in the hands of soldiers from the United States and other NATO countries involved in an international peacekeeping force known as KFOR.

American soldiers stood guard this week beside two armored Humvees on the road out of Mitrovica.Credit…Armend Nimani for The New York Times

On the road out of Mitrovica to the border where clashes flared in late July, a small group of American soldiers stood guard this week beside two armored Humvees, a reminder to both ethnic Serbs and ethnic Albanians where ultimate power lies.

Tatjana Lazarevic, the director of KoSSev, an independent news media outlet that has often clashed with Mitrovica’s Belgrade-controlled political elite, said the tensions stirred unpleasant memories of the 1990s. “The barricades, the rhetoric, the anger. I’ve seen it all for 30 years. Nothing really changes here,” she said.

‘Defund the Police’ Is Dead. Now What? The Pros and Cons of Congestion Pricing in Manhattan

European Leaders Agree to a Second Wave of Russia Sanctions 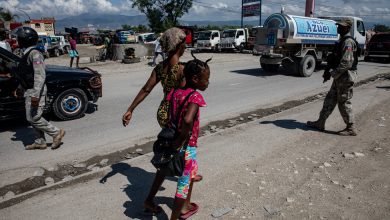 Canada Imposes Sanctions on Haiti’s Former Leader and Other Officials