Amid a rise in murders in cities across the nation, and intense Republican efforts to paint Democrats as hostile to law enforcement, President Biden on Thursday traveled to New York City to assert his party’s public safety credentials, affirming his support for law enforcement and detailing his administration’s plans to work with the city to confront gun violence.

Flanked by elected officials including Mayor Eric Adams — a former police captain whose messaging around crime and justice has been embraced by some national Democrats — Mr. Biden highlighted his calls to increase federal investments in policing and pledged that the Justice Department would focus on so-called ghost guns, firearms that are easily assembled from kits but are not regulated by federal gun laws.

“Mayor Adams, you and I agree: The answer is not to abandon our streets,” Mr. Biden said at the New York Police Department headquarters. “The answer is to come together, police and communities, building trust and making us all safer. The answer is not to defund the police. It’s to give you the tools, the training, the funding to be partners, to be protectors.”

The president’s visit comes against the backdrop of a pandemic-era rise in gun violence that has shattered American cities and reordered the politics of public safety, even as the rates of violent crime in places like New York remain well below those of the early 1990s. His appearance unfolded in a city on edge, a day after a funeral for one of the two young police officers who were recently shot to death in Harlem while responding to a 911 call.

“Yesterday we gathered at St. Patrick’s Cathedral in mourning,” Mr. Adams said. “Today, here at 1 Police Plaza where I walked across that stage as a captain, we’re here in solidarity to deal with the issue of violence that has become pervasive, and not only in New York City, but in the cities across America.”

Mr. Biden, who has experienced deep personal losses himself, spoke ahead of the trip with family members of the slain officers to express his condolences ahead of the trip, according to the White House.

In an already-difficult political environment for Democrats at the beginning of a midterm election year, Mr. Biden is navigating challenging crosscurrents: expectations from his base to deliver on long-promised police accountability measures, and a concerted Republican effort to define Democrats as weak and untrustworthy on matters of crime.

His struggling approval ratings and languishing legislative agenda have not helped — but New York Democrats, including Mr. Adams, Gov. Kathy Hochul and several members of the congressional delegation, warmly welcomed him on Thursday.

Mr. Adams, New York’s second Black mayor, initially made a public name for himself as an advocate for combating police misconduct while serving as an officer on the force. Prominent national Democrats like Mr. Biden have embraced him as a powerful messenger on those issues, even as he has clashed with other political leaders at home over how to improve the city’s safety. Some Democrats argue that he is too quick to embrace overly punitive measures, and is too reliant on policing when other tools could better address sources of crime.

Representative Alexandria Ocasio-Cortez, Democrat of New York, said in an interview this week that she was concerned about a “jails-and-police-centered policy, with just gestures to investments in what we actually know and have evidence reduces crime.”

But Mr. Adams is plainly emerging as an important validator of the president.

“We both know our highest calling, our most important mission, is protecting the people of this city, and of this country,” said Mr. Adams, who has declared himself the “Biden of Brooklyn” — a nod to their overlapping bases of working-class voters of color. “There is no recovery without public safety. There is no recovery without justice. They go hand in hand. That is why we’re working in lock step to end the gun violence that has shaken our city, our nation, to protect our people and the officers who are sworn to protect us.”

Mr. Biden, for his part, described a shared vision with Mr. Adams that the best approach to public safety was not to divest from the police but rather to bolster departments, as well as initiatives that tap community members to intervene before violence occurs.

He noted that he had called on Congress to increase federal grants to police departments by $300 million and encouraged localities to use stimulus funds to hire more officers and pay them overtime. At another point, Mr. Biden turned and singled out Officer Sumit Sulan, the rookie officer who shot and killed the gunman who fatally shot two policemen in Harlem last month. Officer Sulan rose and faced a standing ovation. He met with Mr. Biden ahead of the event, according to the White House.

Schools Chancellor: David Banks. The longtime New York City educator, who rose to prominence after creating a network of public all-boys schools, takes the lead at the nation’s largest public school system as it struggles to emerge from the pandemic.

Commissioner of Correction Department: Louis Molina. ​​The former N.Y.P.D. officer, who was the chief of the Las Vegas public safety department, is tasked with leading the city’s embattled Correction Department and restoring order at the troubled Rikers Island jail complex.

Chief Counsel: Brendan McGuire. ​​After a stint as a partner in a law firm’s white-collar practice, the former federal prosecutor returns to the public sector to advise the mayor on legal matters involving City Hall, the executive staff and administrative matters.

Transportation Commissioner: Ydanis Rodriguez. ​​The Manhattan council member is a trusted ally of Mr. Adams. Mr. Rodriguez will face major challenges in his new role: In 2021, traffic deaths in the city soared to their highest level since 2013, partly due to speeding and reckless driving.

Health Commissioner: Dr. Ashwin Vasan. Dr. Dave A. Chokshi, the current commissioner, stays in the role to provide continuity to the city’s pandemic response. In mid-March, Dr. Vasan, the president of a mental health and public health charity, will take over.

Deputy mayors. ​​Mr. Adams announced five women as deputy mayors, including Lorraine Grillo as his top deputy. Philip Banks III, a former N.Y.P.D. chief who resigned while under federal investigation in 2014, later announced his own appointment as deputy mayor for public safety.

Executive director of mayoral security: Bernard Adams. Amid concerns of nepotism, Mayor Adams’s brother, who is a retired police sergeant, will oversee mayoral security after he was originally named as deputy police commissioner.

“We’re about funding and providing the additional services you need beyond someone with a gun strapped” to their hip, Mr. Biden said, adding that there was another $200 million for community violence intervention programs in his budget proposal.

Later on Thursday, Mr. Biden met with community leaders focused on that issue and visited Public School 111 in Queens.

Outside, a small crowd of people had gathered, with several saying they welcomed the president’s visit and his focus on combating violence.

Savannah Lauren, 39, a medical records manager at a nearby facility, said she hoped that the president would facilitate more funding to groups that work to address violence, and that the federal government would assist Mr. Adams’s efforts to rein in violence.

Earlier on Thursday, the Justice Department directed every U.S. attorney’s office in the country to increase resources toward combating violent crime at the local level. Mr. Biden also reiterated a previous directive that the Bureau of Alcohol, Tobacco, Firearms and Explosives would crack down on guns moved across state lines, although advocates have also criticized the administration for not securing a Senate-confirmed leader to head the agency.

“If you commit a crime with a ghost gun,” Mr. Biden said, “not only are state and local prosecutors going to come after you but expect federal charges and federal prosecution as well.”

Clyburn Pushes His Pick for Supreme Court, Testing His Sway With Biden 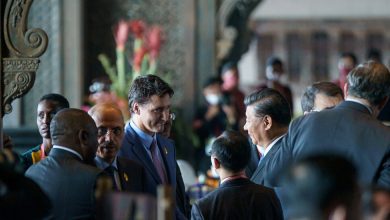 China’s Xi Scolds Trudeau Over a Conversation Made Public 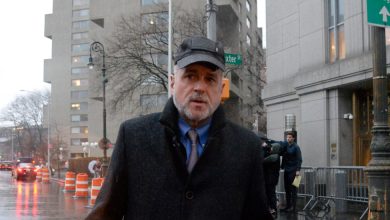 Ex-Head of N.Y.P.D. Sergeants’ Union Admits to Stealing From His Members