PARIS — Beneath France’s angry outbursts about a secretive “knife-in-the-back”American deal to provide nuclear-powered submarines to Australia lay a single question that, as the French say, put the finger where it hurts.

After much tiptoeing in France around the issue, the newspaper L’Opinion asked at the top of its front page a question familiar to anybody who knows “Snow White.”

“Mirror, mirror on the wall, tell me if I’m still a great power?’’

Europe is speckled with fading former imperial powers. But France has clung more than most to its past as a great power, still seeing itself as having global interests partly because of territorial possessions in the Indo-Pacific and the Caribbean. Imbued with a sense of grandeur, France harks back to the Enlightenment to speak about fighting obscurantism in the world today and proffers its secular universalism as a model for modern societies. It often punches above its geopolitical weight, though it also overreaches.

The question of whether France is still a great power — not only the answer, but also the fact that it is still being asked — shows how its past glory continues to shape its national psyche. The flip side — the repeated assertion that France is suffering from an existential decline — is one of the most potent themes in French domestic politics, pushed forward mostly by the right and far right.

And so the crisis over the submarines has forced France to look into the mirror and, rather than settling for a soothing ambiguity, seek uncomfortable truths. Was there an unbridgeable divide between France’s vision of itself and its actual power?

The United States, Britain and Australia kept France in the dark as they secretly negotiated an agreement to provide Australia with nuclear-powered submarines, blowing up an earlier deal between France and Australia and wiping away with one stroke what the French saw as a framework to project power in the Pacific for decades to come.

President Emmanuel Macron and other members of his government learned about the new deal only hours before the United States, Australia and Britain made it public.

All of a sudden, French assumptions about its foreign policy — the West, working alliances, its place in the Pacific — were overturned, said Bertrand Badie, an expert on French international relations at the Sciences Po university.

“And we were viewed as being small,” Mr. Badie said. “That kills a country like France.’’

In a joint statement released after Mr. Macron and President Biden talked by phone on Wednesday, the United States appeared to acknowledge the slight. The Americans agreed that they should have engaged in “open consultations’’ and Mr. Biden committed to doing so in the future.

But that is cold comfort for Paris.

Steeped in history, France still sees itself as occupying a premier rank in the world’s pecking order, Mr. Badie said. That self-perception shapes the way it deals with other nations, including former colonies where its foreign policy is based on what it still often describes as having “particular responsibilities,” he said. Mr. Badie said that France also has difficulties dealing with emerging powers — “like an old aristocrat who’s now forced to dine next to a peasant who’s become rich, and he finds that unbearable.”

“France is obsessed with one thing, which is rank,’’ Mr. Badie said. “France must maintain its rank. We could psychoanalyze this, because some of this is at the level of the subconscious.’’

In 2016, France struck a $66 billion deal to provide Australia with a dozen conventional attack submarines. The 50-year contract was supposed to be the foundation of a European strategy in response to China’s rise in the Pacific region.

As the only European nation with territories and a military presence in the region, France was Europe’s leading voice for a China strategy less muscular than what the United States and some Asian powers have come to espouse.

Asked whether the failed submarine deal revealed that France was no longer a great power, Philippe Étienne, the French ambassador to the United States, said in a radio interview in Paris: “We are a balancing power and an important power. We have our means.’’

But to others, the failure was an example of overreaching by France.

“We need a French policy in the Pacific because we have commercial, economic and territorial interests there, but the means we have now don’t allow us to be a credible alternative to the United States in facing China,’’ said Arnaud Danjean, a French member of the European Parliament, and a former defense official and diplomat. “The Pacific is the playground of the great powers, the preserve of the United States and China.’’

At a time when even France’s greatest sphere of influence, in its former colonies in Africa, is being eroded by competition from China, Russia and Turkey, France needs to draw clear priorities in its foreign policy, Mr. Danjean said.

But trapped in its self-perception as a global power, France struggles to do just that, he said. While Mr. Macron has said that France’s power lies in a strong Europe, he has often forged ahead alone, he said.

In 2020, days after a massive explosion destroyed parts of the capital of Lebanon, a former French colony, Mr. Macron parachuted into Beirut determined to bring order to Lebanese politics. During a second visit just weeks later, he announced the formation of a new government within 15 days and, when no government was formed, accused the country’s political class of “betrayal’’ and said he was “ashamed.”

“The French are a little nostalgic for grandeur,” Mr. Danjean said. “But the problem is that with this kind of attitude, the day things don’t work out, you find yourself precisely in the kind of difficult situation that we’re in now with Australia.”

Mr. Macron, second from left, aboard a French Navy helicopter carrier in Beirut in September.Credit…Pool photo by Stephane Lemouton

Supporters of French policy in the Pacific say that France was not blinded by its past, but simply trying to establish a coherent policy in a region where it has real interests, including territories and naval bases.

Mr. Tertrais dismissed the idea that France failed by overreaching, blaming instead the duplicity of the United States, Britain and Australia.

“If what is meant by overreaching is that we cannot resist a shock-and-awe offensive by three of our closest friends and allies, yes, that’s true,” Mr. Tertrais said.

While France’s military is dwarfed by that of the United States or China, it remains one of the world’s strongest, and is backed by a world-class domestic military industry, said Hugo Decis, a French analyst at the International Institute for Strategic Studies in London.

With 5,000 to 7,000 soldiers in the Pacific region, 20 to 40 military aircraft and seven naval ships, France is the only European nation with genuine military strength in the region. The French air force has also carried out exercises deploying Rafale fighters from France halfway across the world to the Pacific as a show of strength, Mr. Decis said.

France also has a seat on the U.N. Security Council, giving it a measure of hard power around the world. But for the great power that France once was, it’s sometimes just not enough.

“The decline of France is a theme that emerges often, especially during electoral periods, and is popular among the right and far right,” Mr. Decis said. “It’s the idea that France used to be extremely powerful and influential, and that the France of today is insignificant and contemptible. It’s obviously a narrative that can be questioned for a number of reasons.”

What Newsom’s Victory in Orange County Says About 2022 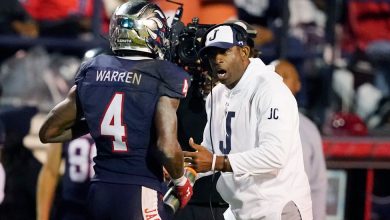