Brooklyn’s district attorney said Friday that his office would ask a judge to wipe away the convictions of three men who have spent decades in prison for the 1995 arson death of a subway token clerk, saying they were the victims of a police detective who coerced false confessions.

The men, James Irons, Thomas Malik and Vincent Ellerbe, were convicted as teenagers and were each sentenced to 25 years to life in prison. Mr. Ellerbe was released on parole in 2020, but the other two men have remained incarcerated, according to a news release from the district attorney, Eric Gonzalez.

“The findings of an exhaustive, years long reinvestigation of this case leave us unable to stand by the convictions of those charged,” Mr. Gonzalez said in a news release. The men were to appear in court Friday afternoon.

Mr. Gonzalez said that the bad convictions were the fault of the lead detectives on the case, Louis Scarcella and Stephen Chmil. He said Mr. Scarcella pressured the teenage defendants into confessions, failed to divulge the shaky nature of witness identifications and ignored factual inconsistencies in the confessions and evidence.

Mr. Scarcella, who retired in 1999, handled some of Brooklyn’s highest-profile crimes in a unit that oversaw more than 500 homicides a year.

His reputation crumbled after one of his most celebrated investigations — into the murder of a Hasidic rabbi in Williamsburg — unraveled in 2013 and defense lawyers accused him of framing a suspect. Since then, more than a dozen convictions he helped secure have been thrown out. Mr. Scarcella has repeatedly said that he did nothing wrong.

The killing of the subway employee, Harry Kaufman, 50, was dramatic even in a city then suffused with crime. Mr. Kaufman was doused with flammable liquid inside a token booth in the Bedford-Stuyvesant section of Brooklyn that was set on fire.

Mr. Kaufman was working in the token booth when he was doused with flammable liquid. The booth was then set on fire and exploded.

The liquid ignited with such force that the booth was blown apart, spraying broken glass, charred insulation and splintered wood across the Kingston-Throop Avenue station. Police officers found an M-1 carbine near the wreckage. Mr. Kaufman died several days later of his injuries.

On Friday, a lawyer for Mr. Irons, David Shanies, called the pending exonerations “the culmination of a years-long process” by advocates for the three men and by investigators for a Convictions Review Unit in the Brooklyn district attorney’s office, which has overseen the reversals of 33 convictions since 2014.

Ronald L. Kuby, a veteran defense lawyer who represented Mr. Malik at his original trial and is representing Mr. Malik and Mr. Ellerbe in the exoneration proceedings, said in an interview that the original injustice was “so far back that Scarcella was the hero and I was the villain.”

Fretting Over Spelling and Fussing Over Spacing, On Deadline at the British Open 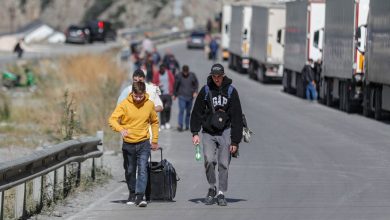 As Russians Flee, Some Find Draft Notices Waiting at the Border

Patrick Ewing Needs Another Moment of Glory at the Garden

Even on the Glamorous Canadiens, Guy Lafleur Was a Rock Star