(Want to get this newsletter in your inbox? Here’s the sign-up.) 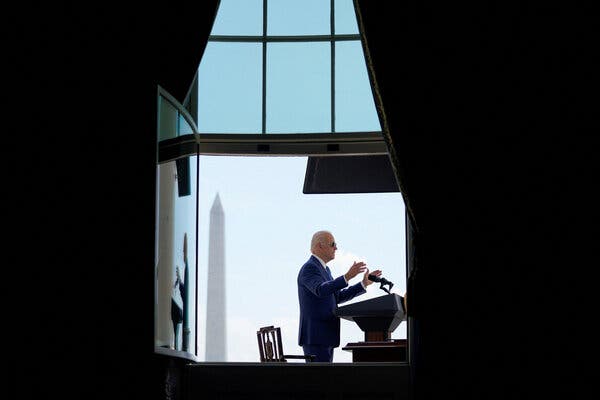 Passing the package would be a major victory for the Biden administration.Credit…Pool photo by Evan Vucci

1. President Biden’s climate and tax bill will begin to move through the Senate this weekend.

Senator Kyrsten Sinema of Arizona, the lone Democratic holdout on the package, said she would support the bill after Democratic leaders agreed to drop a $14 billion tax increase on some wealthy hedge fund managers and private equity executives that she had opposed.They also changed the structure of a 15 percent minimum tax on corporations and included drought relief money to benefit Arizona.

The bill still needs to clear hurdles before the Senate can pass it. With Republicans united in opposition, all Democrats in the 50-50 Senate have to vote for it before it can become law.

In other political news, A Times investigation found that Republican state treasurers around the country are working to thwart state and federal climate action.On abortion, Republican politicians are trying to recalibrate their messages after a fierce backlash.

U.S. employers added 528,000 jobs last month, the Department of Labor said, an unexpectedly strong gain that showed the labor market was not slowing despite higher interest rates, at least so far.

The impressive performance — which brings total employment back to its level of February 2020, just before the pandemic lockdowns — provides new evidence that the country has not entered a recession. But with the Federal Reserve pursuing an aggressive policy of interest rate increases, most forecasters expect the labor market to cool later in the year, as companies cut payrolls to match lower demand.

Lessons from the past: Our reporter looked at the last time inflation was soaring, 40 years ago. Back then, short-term investing was perilous, but people with patience and long horizons came out fine.

Beijing also pulled the plug on planned meetings with the U.S. about the military, climate change and other issues, sending ties between the two powers into a deep chill.

The moves signaled Beijing’s willingness to push back at the U.S. and its allies to telegraph its fury over Speaker Nancy Pelosi’s visit to Taiwan this week.

In Taiwan, younger people tend to be less willing to accept Chinese bellicosity than earlier generations.

In the Middle East, Israeli airstrikes hit several targets on the Gaza Strip, killing a number of people, including a senior commander of the Palestinian militant group Islamic Jihad.It was the deadliest escalation of violence there since the 11-day war last year.

A Russian court has sentenced Brittney Griner to nine years in a Russian penal colony.Credit…Pool photo by Evgenia Novozhenina

4. The U.S. and Russia are ready to negotiate a possible deal to free Brittney Griner.

Secretary of State Antony Blinken and the Russian foreign minister, Sergey Lavrov, said the negotiations would be conducted through a special channel. Griner, a star of the W.N.B.A., was sentenced by a Russian court to nine years in a penal colony for bringing vape cartridges containing hashish oil into the country.

Herlawyers said they plan to appeal her case, but that it could take months. Griner’s teammates on the Phoenix Mercury were heartbroken by the news of her sentence.

In Ukraine, fighting has intensified near the enormous Zaporizhzhia nuclear power complex on the Dnipro River, raising alarms from Ukrainian officials and the world’s nuclear watchdog agency.

One case of polio was confirmed last month in a county north of New York City, which the state’s health commissioner described as possibly “the tip of the iceberg.”

Wastewater samples taken in several locations north of New York City potentially signal community spread of the highly contagious disease. If you’ve been vaccinated, there is little cause for concern.

In other health news, officials worry that the monkeypox vaccine shortage in the U.S. could threaten immunocompromised people, like those with H.I.V.

A relative of a victim killed in the Parkland, Fla., shooting broke down in court this week.Credit…Pool photo by Amy Beth Bennett

6. Relatives and friends of the victims in the Parkland, Fla., shooting described their anguish.

The testimony was part of the agonizing trial in which a jury will decide whether Nikolas Cruz — who pleaded guilty to the shooting rampage that left 17 people dead at Marjory Stoneman Douglas High School in 2018 — should be sentenced to death or to life imprisonment.

One by one, the relatives and friends described the depths of their despair since losing their loved ones four years ago. “The night no longer brings intimacy and comfort,” said Debra Hixon, the wife of Chris Hixon, the school’s athletic director who was killed in the shooting. “Just the loudness of the silence.”

The defense is scheduled to begin its case later this month.

In other courtroom news, a jury decided that the conspiracy theorist Alex Jones must pay the parents of a child killed in the 2012 Sandy Hook school shooting $45.2 million in punitive damages.

With the rise of remote work, new careers and job titles have sprung into existence, such as “head of team anywhere” and “vice president of flexible work.” The lasting power of these new positions has yet to be tested.

“People will try a lot of titles,” said J.T. O’Donnell, a career coach. “Some will fail because they’ll be too far out there. But ultimately you’ll see a lot of shifts.”

In other business news, top Amtrak executives received six-figure incentive bonuses in 2021 even though the service had weak ridership and lackluster financial performance because of the pandemic, according to data obtained by The Times.

Tom Sturridge stars as Morpheus in “The Sandman.”Credit…Netflix

Ever since Neil Gaiman wrote the first issues of “The Sandman” in 1989, fans have hoped for a screen adaptation. Now viewers can watch Morpheus, the king of dreams, and his supernatural siblings in Netflix’s take on the award-winning, genre-blending comic.

Gaiman said in an interview with The New York Times Magazine that “The Sandman” had endured because new generations “find it, and it’s their comic. It’s their story.”

In other news about August premieres, Abbi Jacobson, the star and co-creator of the series “A League of Their Own,” said she wants to tell stories about insecure people and then “what if the most insecure, unsure person is the leader?”

Scorching heat is driving some tourists away from Rome.Credit…Andrea Ronchini/NurPhoto via Getty Images

After more than two years of postponing their vacations, tourists are traveling to Europe this summer, only to be met with record-setting heat that will most likely worsen because of climate change.

But several people in the industry say a growing number of travelers are adjusting their plans to account for high temperatures by heading to coastal or northern destinations and booking trips in the cooler months of April, May, September and October.

In another climate concern, glassbottles may be perfect for aging wine, but making them requires an enormous amount of heat and energy.

Could a plesiosaur lurk in Loch Ness?Credit…Ross Barker/Alamy Stock Photo

10. And finally, a glimmer of hope for Loch Ness monster believers.

A discovery by researchers in Britain and Morocco added weight to the hypothesis that long-necked prehistoric reptiles known as plesiosaurs might have lived in lakes, rivers and oceans. The team found fossils of 12 plesiosaurs, proof that it was not just one plesiosaur that wandered into freshwater and then died there.

Some Nessie enthusiasts say their favorite monster could be a plesiosaur and that the study makes the idea more plausible, even though plesiosaurs went extinct about 66 million years ago.

Have a fantastical weekend.

Your Evening Briefing is posted at 6 p.m. Eastern.

Want to catch up on past briefings? You can browse them here.

What did you like? What do you want to see here? Let us know at briefing@nytimes.com.

Here are today’s Mini Crossword, Spelling Bee and Wordle. If you’re in the mood to play more, find all our games here.

Tags
New People Sai̇d That Will

Steve Bannon turns himself in on contempt of Congress charges.

As F.B.I. Breached Texas Synagogue, Hostages Were Dashing for Exit

Yellowstone to Weigh Climate Change Risks When Rebuilding From Flood