Four favorites from The Times’s theater critic in London 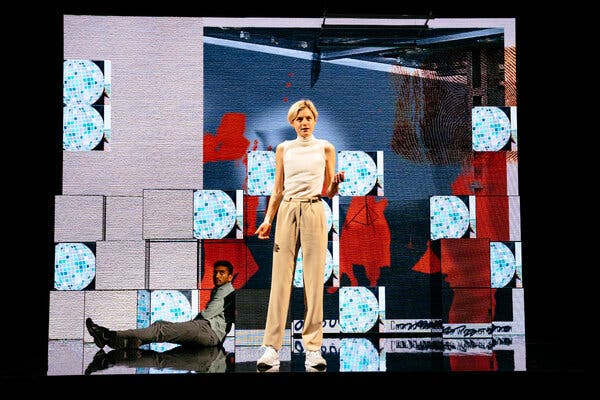 Joseph Charlton’s 80-minute two-hander was first seen in 2019 at the VAULT Festival, an annual London showcase of new work on the theatrical fringe, but it hit the big time last summer as part of the producer Sonia Friedman’s RE:EMERGE season of new writing. In Daniel Raggett’s bravura production,the mysterious con woman of the play’s title draws the ambitious techie Arielinto her duplicitous orbit. Playing a fictionalized take on the real fraudster Anna Sorokin, the lauded Princess Diana of “The Crown,” Emma Corrin, proved a stage natural in this West End debut: sleek, stylish and intriguingly dangerous.

This 1966 musical is rarely absent from the London stage for long. But I’ve seldom seen it so angrily, or movingly, realized as in the production from the fast-rising director Rebecca Frecknall that opened recently at the Kit Kat Club, as the Playhouse Theater has been renamed. The West End venue has been refashioned into a Weimar-era Berlin nightclub, complete with backstage corridors full of dancers, and drinks, that audience members discover on the way to their seats. Jessie Buckley is blistering as the hapless Sally Bowles, and Eddie Redmayne is a sinister and sinuous Emcee. The two reinvent their iconic roles from scratch, and are given robust support by Liza Sadovy and Elliot Levey as the doomed couple at the musical’s bruised heart.

Ivo Van Hove’s “Roman Tragedies,” which was livestreamed from the International Theater Amsterdam in February.Credit…Jan Versweyveld

Amid a lean spell for Shakespeare on the London stage, a one-off livestreamfrom Amsterdam during the coronavirus lockdown in February found something current in some time-honored texts. “Roman Tragedies” amalgamated Shakespeare’s three Roman plays — “Julius Caesar,” “Coriolanus” and “Antony and Cleopatra” — into a riveting six-hour marathon conceived well before its Belgian director, Ivo van Hove, had become a Broadway and West End presence. (The triptych was first performed in 2007.) These studies in political discord and societal discontent found multiple correspondences with the present, not least in the storming of the Capitol in Washington, D.C., the previous month: Democracy is fragile in Shakespeare’s plays, and it certainly felt so then.

From left, Linda Bassett, Samir Simon-Keegan and John Heffernan in Caryl Churchill’s “What If If Only” at the Royal Court Theater.Credit…Johan Persson

“What If If Only”

At 83, Caryl Churchill shows no sign — thank heavens — of slowing down or easing up on the adventure and surprise that characterize her work. “What If If Only,” her latest offering, ran a mere 20 minutes, but without leaving the audience feeling shortchanged. Churchill’s searching wit and intelligence were evident at every turn, as was the crystalline clarity brought to the play by her frequent director, James Macdonald, and a superb cast headed by John Heffernan and Linda Bassett, playing characters with names like Someone, Future and Present. The potentially cryptic, in their hands, made perfect sense.

Why must seemingly every film become a stage musical? I was beginning to feel I’d had enough after watching this misbegotten venture, which is adapted from the same novel by Jack Engelhard as the 1993 Robert Redford and Demi Moore movie. The outline remained: A couple is thrown into turmoil when the wife is offered a million dollars to sleep with a smooth-talking man of means, here played by Ako Mitchell. What was missing was any real characterization, motivation or decent music. The production resembled a cruise ship lounge act: appropriate for a show that was entirely at sea.

Four favorites from The Times’s theater critic in Paris

Eric Foucart in “What Should Men Be Told?” at the MC93 theater in Bobigny, France.Credit…Emilia Stéfani-Law

“What Should Men Be Told?”

The first performances of “What Should Men Be Told?” (“Que Faut-Il Dire aux Hommes?”) took place under unusual circumstances. Last January, theaters were still closed in France under coronavirus restrictions — they didn’t reopen until May — and to keep artists onstage, some theaters held private daytime performances for industry professionals. This collaboration between the director Didier Ruiz and seven men and women of faith provided unexpected respite from the outside world. All were nonprofessional actors opening up in monologues about their relationship to spirituality, whether they had spent decades in a Dominican cell or found shamanist beliefs late in life. Even to this atheist, the result felt like a soothing meditation.

In Stefano Massini’s “7 Minutes,” the director Maëlle Poésy found a play that both widens the horizons of the Comédie-Française, France’s oldest and most prestigious theater company, and plays to its strengths. This contemporary blue-collar drama — a rarity in the Comédie-Française repertoire — follows 11 women who fear for their jobs after the textile factory where they work changes hands. They meet to discuss whether they should accept or reject an offer from the new management team, which initially seems too good to be true. The cast, drawn from every generation within the company’s permanent acting troupe, delivered the debate with passion, nuance and a compelling hint of working-class rebellion.

Vhan Olsen Dombo, left, and Claudia Mongumu in “Out of Sweat” at Le Lucernaire.Credit…Raphaël Kessler

The premiere of “Out of Sweat” was delayed twice because of the pandemic, but it was worth the wait. The play, by Hakim Bah, won the 2019 Laurent Terzieff-Pascale de Boysson writing prize, created by the Lucernaire theater to encourage new talent and help produce their work. It deftly tells the stories of a handful of characters from an unspecified African country. One woman has already emigrated to France, while another decides toseduce a Frenchman online, abandoning her children and unfaithful husband. Yet “Out of Sweat,” co-directed by Bah and Diane Chavelet, is no gritty drama: Each scene is a self-contained work of poetry, carried by the musical lilt in Bah’s writing. A superb and versatile cast completes this showcase of Black talent.

The Italian director Emma Dante has become a regular visitor to the Avignon Festival, and “Misericordia,” one of two productions she presented there this year, exemplified her mastery of movement-based theater. In this spare show, three women rally around a mentally disabled young man, Arturo, whose mother has died. Dante gives the characters a larger-than-life physicality to express their frustrations, as money becomes tight and their home life fraught. The back-and-forth gestures and quips among them are meticulously timed, and as Arturo, Simone Zambelli, a trained dancer, anchors every scene, his limbs bending and darting eloquently in bittersweet solo turns.

Gus Van Sant certainly doesn’t lack confidence. For his first stage production, “Andy,” a musical inspired by the life of Andy Warhol, he opted not only to direct but also to write the script, design the sets and compose the music. Predictably, “Andy,” which had its premiere as part of Lisbon’s Biennial of Contemporary Arts, failed on pretty much all counts, with labored pacing, dubious songs and characters that never acquired inner lives. The inexperienced cast valiantly tried to save Van Sant from himself, but this will go down as a lesson in the perils of hiring big names who lack a basic knowledge of stagecraft.

Four favorites from The Times’s theater critic in Berlin

Lina Beckmann in “Richard the Kid and the King” at the Salzburg Festival.Credit…Monika Rittershaus

“Richard the Kid and King”

The German actress Lina Beckmann gave the performance of the year in this epic Shakespeare mash-up that traces the development of the Bard’s most bloodthirsty monarch. Selecting carefully from the vast panorama of the eight War of the Roses plays, the director Karin Henkel keeps her staging (seen at both the Salzburg Festival in Austria and the Deutsches Schauspielhaus in Hamburg, Germany) focused and uncluttered despite the large dramatis personae. For much of the lengthy evening, the Houses of Lancaster and York are brought to life by a handful of nimble actresses playing multiple roles. But theproduction belongs to Beckmann, whose volcanic performance as Richard III is a master class in shape-shifting, dissembling and uncanny persuasion: in other words, in acting itself.

Robert Wilson’s legendary production of Kurt Weill and Bertolt Brecht’s “The Threepenny Opera,” which ran for over 300 performances at the Berliner Ensemble, was going to be a hard act to follow. If Barrie Kosky, the director of the new production at the theater, where what is Berlin’s most famous musical premiered in 1928, felt under pressure, his assured staging doesn’t show it. Kosky’s bold reimagining scrupulously avoids the Weimar clichés that have hardened around the work over the past 90 years. Working with a flawless cast from the theater’s acting ensemble, Kosky has produced something full of savage and gleeful menace — and the firecracker score has rarely sounded better.

The cast of “Metamorphoses (overcoming mankind)” at the Volksbühne Berlin.Credit…Julian Röder

As Germany slid back into lockdown last winter, the Volksbühne forged ahead with a series of new plays, streamed online, exploring ancient Greek drama and myth. The most arrestingly beautiful was the director Claudia Bauer’s Ovid-inspired “Metamorphoses (overcoming mankind),” a hypnotic combination of drama, dance and music whose premiere was one of the most exquisitely filmed digital productions of the pandemic. Seven actors (wearing blank masks) and three musicians imaginatively conjured the magical transformations whereby women become birds and men turn into flowers. At the same time, Bauer used the stories about the porous relationship between humans, nature and the gods to reflect on a range of timeless and contemporary issues, including gender fluidity, toxic masculinity, exploitative capitalism and climate change.

From left, Katharina Bach, Svetlana Belesova and Thomas Schmauser in “The Politicians” at the Münchner Kammerspiele.Credit…Judith Buss

When I first saw Wolfram Lotz’s dramatic monologue “The Politicians” (“Die Politiker”) embedded in a 2019 reimagining of “King Lear,” I was startled by the verve and inventiveness of this manic, free-associative monologue. In the short time since, Lotz’s screed has taken on a surprising life of its own in several stand-alone productions throughout Germany and Austria. In Felicitas Brucker’s concise and furiously paced staging at the Münchner Kammerspiele, three performers give a dazzling rapid-fire delivery of this enigmatic and repetitive text. Clocking in at 65 minutes, “The Politicians” feels like a sustained freak-out: an exhilarating roller coaster of bravura acting and transformative stagecraft, in the service of a distinctively bold (and odd) new dramatic text.

A new staging of Hugo von Hofmannsthal’s rarely performed “The Falun Mine” was intended to celebrate the Austrian writer who was one of the Salzburg Festival’s founders, and whose morality play “Jedermann” is the event’s perennial favorite. Sadly, Jossi Wieler’s production, which arrived in the midst of the festival’s centennial celebrations, was so lackluster that it felt like the opposite of a rediscovery. Indeed, the inert staging was so dreary that one could wish “The Falun Mine,” never performed during Hofmannsthal’s lifetime, had remained buried. Here’s hoping some other theater or director can successfully excavate it in the future.

Tags
Act Play That This Ti̇me

Crack Down Hard, or Wait and See? Europe Splits on Omicron Response.

The U.S. Faces Another Covid Christmas as Omicron Fuels a Rise in Cases