This is the Education Briefing, a weekly update on the most important news in U.S. education. .

Today, we’re looking at the ways labor shortages are affecting school lunch. And we offer an update on Dasani, who grew up homeless in New York City. 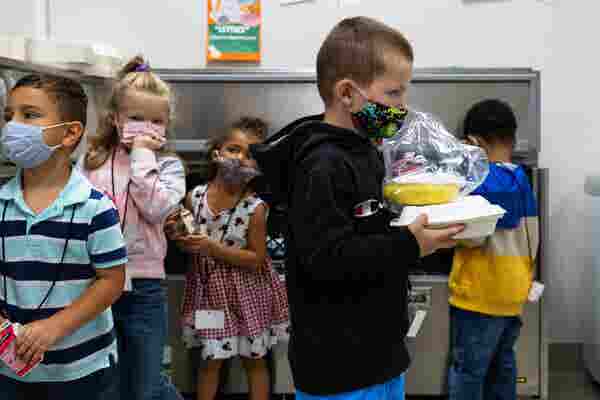 Preschool students get lunch in Kansas City, Mo. Their district is supplementing meals with food from local Sam’s Clubs and Restaurant Depots.Credit…Katie Currid for The New York Times

Schools across the country are struggling to feed students. That’s a big problem: Many children rely on the food they eat at school as a significant, and sometimes only, source of daily nutrition.

In Missouri, some school officials have been making twice-weekly runs to Sam’s Club to stock up on frozen pizzas and hot dogs. In Kansas, a district ran out of vegetables twice last month. And in St. Paul, Minn., one district has an emergency supply of frozen grilled cheese sandwiches.

The pandemic is mostly to blame.

As a result, good food and even plastic cutlery are harder to find. According to a recent survey, 97 percent of directors of school meal programs reported having concerns about supply-chain disruptions.

“I’ve never seen the supply chain in this much chaos, and I’ve been doing this for 30 years,” said Michael Rosenberger, the executive director for food and child nutrition services in Dallas.

The district, which normally has about a month’s worth of cutlery stocked, is now down to a nine-day supply. So on Tuesdays, all lunches consist solely of finger foods: carrot sticks and apple slices instead of tossed salad and apple sauce; chicken tenders instead of spaghetti and meatballs.

The Agriculture Department has given schools more flexibility to meet federal nutritional guidelines and increased the rate it will reimburse schools for the cost of food products.

Still, it’s not ideal. Most products available at wholesale stores have higher levels of sodium and fat than the meals they would usually receive.

And even if supplies arrive, schools face worker shortages in their cafeterias.

In Anchorage, seven schools offered prepackaged meals for lunch instead of hot meals. There were just not enough workers to prepare and serve the food, said Andrew Mergens, the senior director of student nutrition. And the problem is worsening: Four cafeteria managers have quit since the school year started.

“Shelf-stable meat isn’t great, but it’s all we got,” he said.

In other shortage news:

An update on Dasani

In 2012, my colleague Andrea Elliott reported on a homeless girl in Brooklyn named Dasani, then 11, who had big dreams and no permanent place to live.

In 2015, Dasani matriculated at Milton Hershey School, a tuition-free institution in Pennsylvania for low-income children. Part of the school’s guiding philosophy is that its students must largely separate themselves from their families to escape poverty.

While there, Dasani started to excel academically, but also started to fight with other students. And she worried about her family, as it fractured back in New York. After one altercation too many, Hershey discharged her in 2017.

Now, after many ups and downs, Dasani is taking classes at LaGuardia Community College, majoring in business administration. She graduated from a public high school in 2019.

She knows that her exit from Hershey might be seen as self-sabotage. But for Dasani, succeeding at Hershey would have meant losing a foundational part of herself.

“It was like they wanted you to be someone that you wasn’t,” she told Andrea. “If I talk the way I naturally talk — to them — like, something’s wrong with me.”

What else we’re following

My colleague Dana Goldstein talked to the students and teachers at John F. Kennedy High School about how they’re readjusting to the classroom.

Kennedy was open for in-person learning most of last school year. But two-thirds of high school students in this working-class, majority Hispanic and Black school district in Waterbury, Conn., ended last year fully online. This year, the hallways are packed again, as more than 1,300 students head back to classrooms.

“Last year I would get migraines probably three times per week from being on the computer screen so much,” said Jessinya Severino, 17, a senior working on her college applications. “I feel better now that we’re back in person.”

Here’s a link to Dana’s piece, which I strongly encourage you to read! See you next week.

Sign up here to get the briefing by email.

Amid Tensions With U.S., Erdogan Praises Ties with Russia

‘A Lot of Uncertainty’: Covid Surge Puts Many Americans on Edge About Traveling

Some Students Want Colleges to Provide the Abortion Pill. Schools Are Resisting.