WASHINGTON — Metal detectors screen lawmakers for weapons at the doors of the House chamber. Staff members are frightened to come to work. Anxious police officers worry about a future attack, even as they relive the one that took place. The citadel of democracy is almost inaccessible to the public it is supposed to welcome and serve.

The Jan. 6, 2021, assault has shaken the foundations of the Capitol, a symbol of American strength and unity, transforming how lawmakers view their surroundings and one another. A dark mood lingers and the scars will be long in healing.

“I have colleagues, to be honest with you, I can’t stand looking at, and I don’t want to get into an elevator with them when we are going to roll-call votes,” said Representative Jim McGovern, Democrat of Massachusetts, referring to Republicans he considers complicit in the attack of a year ago and unapologetic about it today.

The Capitol has been the site of significant violence over the centuries. There was its torching by British troops in 1814, the bloody caning of Senator Charles Sumner in 1856, a spray of gunfire from the House spectator’s gallery by Puerto Rican nationalists that wounded five representatives in 1954, the murder of two Capitol Police officers standing guard in 1998, and the killing of another at a traffic barricade last April. 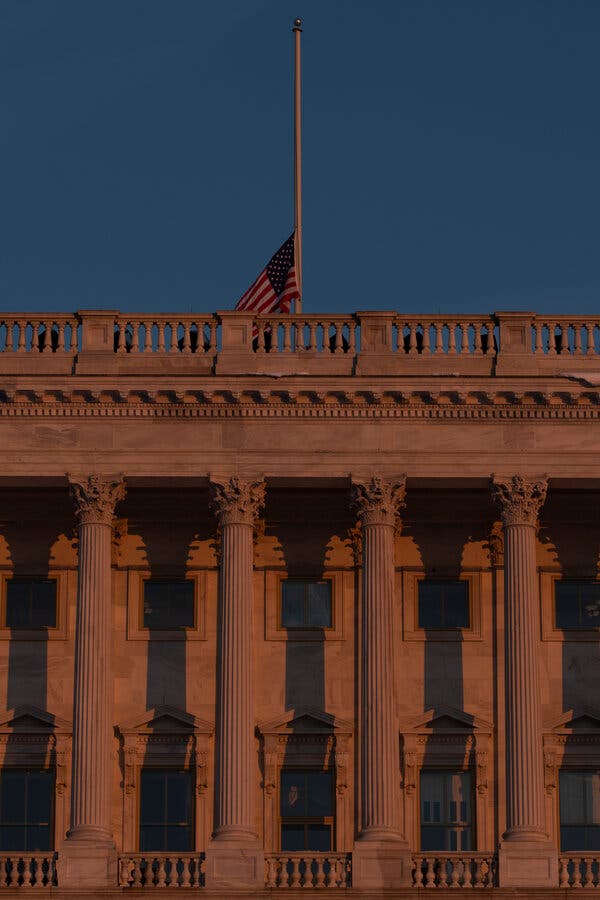 The American flag was flown at half-staff on Wednesday.Credit…Andrew Mangum for The New York Times

But the attack of a year ago was uniquely shattering in that it was a brutal effort by marauding Americans to keep President Donald J. Trump in office despite his election loss by interrupting one of the nation’s essential civic functions — the tallying of the electoral votes for president. Lawmakers who were on hand are still struggling to comprehend it.

“That’s the difference,” said Senator Susan Collins, Republican of Maine, who had argued that Congress should shut down on Thursday to spare staff workers the trauma of reliving a horrific day. “The last time the Capitol was breached and taken over was in 1814 by British forces. Here, we had our fellow Americans storming the Capitol.”

The events of last year have turned everyday spaces in the Capitol into testaments to what transpired. Here’s a spot where they fought their way into the building; there’s a window they broke or a wall they scaled.

A heavily trafficked marble staircase on the Senate side of the building is no longer just a way to reach the second floor. It is now etched in memory as the stairway where Officer Eugene Goodman, acting alone, diverted a mob away from a set of back stairs, allowing Vice President Mike Pence and senators to escape unharmed to a secure location before the intruders breached the Senate chamber.

Senators cannot help but look at the presiding officer’s desk in their inner sanctum and remember that it was roughly commandeered by supporters of Mr. Trump — one shirtless and wearing horns on his head — who rifled through the historic desks in a chamber considered sacred by its usual occupants.

Both the Justice Department and a House select committee are investigating the events of the Capitol riot. Here’s where they stand:

“Have you ever had your house broken into or been a victim of a burglary, and when you walked back into the house it felt differently, it felt violated?” asked Senator Richard J. Durbin, Democrat of Illinois. “I felt that way for the longest time — and I still do.”

In the House, the speaker’s lobby, a narrow, portrait-lined hallway off the floor where lawmakers could relax and kibitz with reporters, is now the place where the mob tried to break through glass and a hastily erected barricade before one of them, Ashli Babbitt, was shot and killed.

Mr. McGovern, the chairman of the House Rules Committee, who was presiding over the chamber just moments before, was standing near the entryway as the intruders approached the door, putting them within reach of lawmakers.

“If you want me to describe what hate looks like, I tell you it is what I saw in the eyes of those people smashing the windows to try to get to us,” said Mr. McGovern. “I still have a tough time coming to grips with the fact that it happened. All of us have to walk through the speaker’s lobby every day and relive that day.”

For others, the ever-present reminders of the attack are the officers who were charged with repelling it as best they could, sustaining serious injuries as they did so.

“I remember them with their faces cut, and I see and talk to them every day,” said Senator Amy Klobuchar, Democrat of Minnesota, who as chairwoman of the Rules Committee was a central figure in the counting of electoral ballots. “It is the faces of the officers that trigger that day for me. It is a constant reminder of what they did and what they are still up against.”

One of the joys of the Capitol before the assault and the ongoing pandemic was its status as a working landmark, a place where nationally recognized political figures hurried through hallways crowded with school groups and awe-struck tourists craned their necks to peer up at the dome from the Rotunda.

The Capitol has been the site of significant violence over the centuries, but nothing quite like the events of Jan. 6, 2021. Credit…Andrew Mangum for The New York Times

But continuing health and security concerns have kept the building mostly closed off, even after the National Guard troops summoned to secure the Capitol in the wake of the riot were sent home and the seven-foot-high, razor-wire-topped fence that ominously encircled the complex was removed.

Key Figures in the Jan. 6 Inquiry

The House investigation. A select committee is scrutinizing the causes of the Jan. 6 riot at the U.S. Capitol, which occurred as Congress met to formalize Joe Biden’s election victory amid various efforts to overturn the results. Here are some people being examined by the panel:

Donald Trump. The former president’s movement and communications on Jan. 6 appear to be a focus of the inquiry. But Mr. Trump has attempted to shield his records, invoking executive privilege. The dispute is making its way through the courts.

Mark Meadows. Mr. Trump’s chief of staff, who initially provided the panel with a trove of documents that showed the extent of his role in the efforts to overturn the election, is now refusing to cooperate. The House voted to recommend holding Mr. Meadows in criminal contempt of Congress.

Scott Perry and Jim Jordan. The Republican representatives of Pennsylvania and Ohio are among a group of G.O.P. congressmen who were deeply involved in efforts to overturn the election. Mr. Perry has refused to meet with the panel.

Phil Waldron. The retired Army colonel has been under scrutiny since a 38-page PowerPoint document he circulated on Capitol Hill was turned over to the panel by Mr. Meadows. The document contained extreme plans to overturn the election.

Fox News anchors. ​​Laura Ingraham, Sean Hannity and Brian Kilmeade texted Mr. Meadows during the Jan. 6 riot urging him to persuade Mr. Trump to make an effort to stop it. The texts were part of the material that Mr. Meadows had turned over to the panel.

Steve Bannon. The former Trump aide has been charged with contempt of Congress for refusing to comply with a subpoena, claiming protection under executive privilege even though he was an outside adviser. His trial is scheduled for next summer.

Jeffrey Clark. The little-known official repeatedly pushed his colleagues at the Justice Department to help Mr. Trump undo his loss. The panel has recommended that Mr. Clark be held in criminal contempt of Congress for refusing to cooperate.

John Eastman. The lawyer has been the subject of intense scrutiny since writing a memo that laid out how Mr. Trump could stay in power. Mr. Eastman was present at a meeting of Trump allies at the Willard Hotel that has become a prime focus of the panel.

Much of the time, the once-vibrant Capitol seems eerily empty and footsteps echo loudly off the marble floors.

“It is sad,” said Representative Steny H. Hoyer, Democrat of Maryland and the House majority leader, who has spent countless hours in the Capitol over the last 40 years and said he hoped it could host visitors again at some point. “It is a stark change.”

In the ensuing 12 months, Democrats and Republicans have inhabited almost parallel universes when it comes to the assault.

Democrats, via a special House committee formed after the Senate rejected a bipartisan commission, continue to press for accountability for those who took part and those who instigated it, starting with Mr. Trump. Republicans have increasingly sought to play down or even deny the attack, characterizing it as little more than a routine protest.

It appears few Republicans will be on hand to commemorate the anniversary, with many senators scheduled to be at a funeral for a former colleague in Georgia. The only Republican lawmakers who have publicized an event are two far-right members of the House closely allied with Mr. Trump, Marjorie Taylor Greene and Matt Gaetz, who have promised to “expose the truth” about Jan. 6 during a news conference on Capitol Hill.

“When there are people in the Senate who refuse to tell their supporters the truth about Donald Trump’s big lie, I think it has made it harder to work together,” said Senator Michael Bennet, Democrat of Colorado.Credit…Andrew Mangum for The New York Times
In the 12 months since the attack, Democrats and Republicans have inhabited almost parallel universes when it comes to the events of that day.Credit…Andrew Mangum for The New York Times

Republicans say they see partisanship at work, calling the metal detectors outrageous and accusing Speaker Nancy Pelosi and Democrats of trying to win political advantage by demonizing their party. On Wednesday, Senator Josh Hawley, Republican of Missouri and one of the chief objectors to counting the electoral ballots a year ago, said in an op-ed for Fox News that the “day’s true legacy was the left’s attempt to use the Capitol unrest to foster a permanent climate of fear and oppression.”

Other Republicans have tried to deflect responsibility, faulting the Democratic speaker for the inadequate security preparations at the Capitol that allowed the breach to occur, or changing the subject altogether.

“I think we’ve gotten over it,” Senator Mitch McConnell, Republican of Kentucky and the minority leader, said in a recent interview. “We’ve gotten back to normal and are doing the people’s business and having raucous debates over how we see things.”

But to Democrats, there won’t be any getting over it until Republicans disavow Mr. Trump’s claim that the election was stolen and acknowledge that the Jan. 6 assault was a criminal attempt to overturn legitimate election results.

“When there are people in the Senate who refuse to tell their supporters the truth about Donald Trump’s big lie, I think it has made it harder to work together,” said Senator Michael Bennet, Democrat of Colorado. “They certainly know better and it has created a real risk to democracy.”

A dark mood lingers at the Capitol, and the scars will be long in healing.Credit…Andrew Mangum for The New York Times
Tags
Capitol Over That The House Who

‘An Untenable Situation’: Chicagoans in Limbo After Schools Abruptly Close

How Many Americans Support Political Violence?