SAN BENITO, Texas — When seven newly arrived migrants were released from government custody on a recent afternoon with nowhere to stay the night, an emergency shelter in this small border city answered the call, sending a volunteer to make his fifth such pickup of the day from nearby Brownsville.

The shelter, La Posada Providencia, had hot food waiting, and ramen noodles for later if the migrants were still hungry. Several of the men, who had come from Cuba and Nicaragua, quickly collapsed on cots fitted with clean sheets and pillows. The volunteer would drive them to the airport early the next morning, and they would then continue their journey northward.

As the United States experiences the largest wave of migration at the southwestern border in decades, it is increasingly relying on an informal pipeline of shelters and other way stations to house and feed migrants who are allowed to stay on a temporary basis, many of whom are seeking asylum, and to help them arrange travel from border communities to wherever they plan to wait — a wait that could potentially last for years — for their immigration court proceedings.

From the time President Biden took office last year through April, the government has admitted about a quarter of the undocumented migrants apprehended at the southwestern border, or about 700,000 out of 2.7 million, according to an analysis of federal data. The rest have been swiftly expelled under an emergency public health order related to the pandemic, or sent back under another legal authority. On Friday, a federal judge ordered that the rule, which was supposed to be lifted on Monday, remain in place; the administration said it would appeal.

Already though, many of the thousands of migrants crossing each day are being let in — of the record 234,088 migrants who arrived in April, nearly half were released into the country for various reasons, including humanitarian exceptions to the public health order and insufficient detention space. In some cases, the government cannot expel people — Cubans and Venezuelans, for example — because it has no diplomatic relations with the country of origin.

As the Biden administration sees about 8,200 border crossings a day — or nearly the population of College Station, Texas, entering the country every two weeks, far more than at this time last year — it is counting on small nonprofit organizations like La Posada Providencia to manage the influx into border cities and towns, helping to stave off politically explosive images of chaos and disorder ahead of the November midterms. 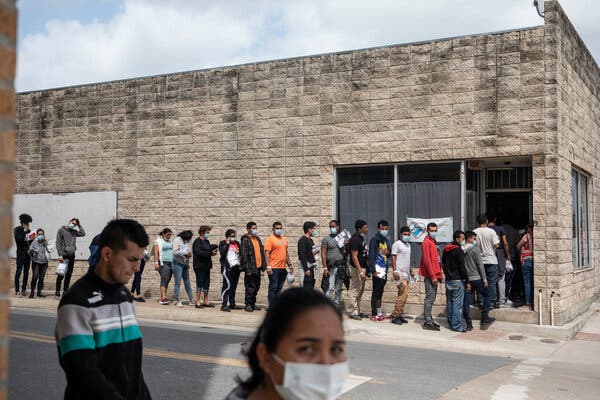 Some of the shelters, though, are becoming overwhelmed. So many migrants are crossing the border near El Paso that a shelter there is working with the city to quickly bring on more staff and add space. A shelter in Eagle Pass is also reaching its capacity and looking for ways to move migrants out of town faster.

“You’re going to see many, many individuals having to be released to the street,” Ruben Garcia, the director of the El Paso shelter, warned in a news conference last week.

Whether providing a meal, a place to cool off or sleep, legal guidance, medical care, transportation or help figuring out how to reach a destination, these shelters and centers, sometimes working with state and local officials, fill a void in the country’s outdated immigration system.

The Border Patrol and Immigration and Customs Enforcement have informally relied on such places for years. But the Biden administration, facing significant pressure to show it was prepared for the end of the public health order, recently made them a central piece of its response plan. The administration also included modest funding for the organizations — $150 million in Federal Emergency Management Agency grants — in its annual budget request, a first.

Still, it is a far cry from the formal relationship the government has with nine resettlement agencies it contracts with to provide an array of services to refugees, such as those who came from Afghanistan over the past year and who are coming now from Ukraine.

For years, the people crossing the southwestern border without documentation were largely single Mexican men. That started to change in 2011, and changed all the more in 2014, when people from other Central American countries, including entire families, started fleeing rampant violence.

At the time, the Sacred Heart Catholic Church in McAllen, Texas, took in hundreds of migrant families that crossed near the southernmost tip of the state. There, the migrants would receive medical attention, shelter and supplies to help get them through the hours of travel that lay ahead en route to their destinations.

Before the church stepped in, migrants were simply dropped off at the local bus station after they were released by Border Patrol officials.

But as more families crossed, the church became overwhelmed. Volunteers called on Sister Norma Pimentel, the executive director of the Catholic Charities branch in the Rio Grande Valley. Since then, Sister Pimentel has overseen a short-term shelter and aid center that can host 1,200 people in downtown McAllen, just across the street from the bus station.

“The most important thing is to restore the dignity — that has been the focus,” Sister Norma Pimentel said, speaking of the migrants she assists. “And stay away from the politics.”Credit…Kirsten Luce for The New York Times

As Sister Pimentel’s operation has expanded over the past eight years, other shelters and way stations have opened along the border, with similar models of assistance. In the past year, migrants from all over the world have arrived at the southwestern border, many fleeing poverty and violence and hoping to seek asylum. Recently, there has been an increase in Cubans, Venezuelans, Nicaraguans and Haitians passing through the respite centers.

“The most important thing is to restore the dignity — that has been the focus,” Sister Pimentel said. “And stay away from the politics.”

Typically, the migrants coming through the centers already have contacts in the United States and plans to unite with them, often setting off within hours of being released from government custody. At many of the centers, employees and volunteers will call migrants’ relatives or friends to confirm their plans, and help them buy a bus or plane ticket, typically paid for by the migrants or their contacts.

Recently, however, more migrants are appearing without a plan or a contact. Shelters can quickly become overwhelmed in such circumstances.

Sister Pimentel is serving only women and families with children at the McAllen center. She coordinates with other groups in the area that can take in migrants who are not traveling as part of a family unit.

One such place is La Posada Providencia, which sits amid farmland about 40 minutes from McAllen.

Maryory Hernandez, from Guatemala, spent a night there in early May, arriving at the shelter the day after her 18th birthday with plans to leave the following day to unite with relatives in Florida. Ms. Hernandez said she had left Guatemala on April 8 because she was receiving threats from gangs. “I was scared,” she said about her journey alone. She finally “felt some peace,” she added, when she got to La Posada Providencia.

Maryory Hernandez said that she finally “felt some peace” after arriving at La Posada.Credit…Kirsten Luce for The New York Times

Volunteers throughout the country are eager to help new arrivals. Whenthe Centers for Disease Control and Prevention announcedit would lift the emergency public health order in late spring, Shon Young, the associate pastor at a church in the small border city of Del Rio, Texas, started getting calls from people in North Carolina, Pennsylvania and Illinois,asking him how they could help.

In 2019, two senior officials from the Del Rio Border Patrol sector reached out to Mr. Young and other local church leaders to see if they could create a respite center similar to the ones in other border towns that had experienced high numbers of migrant crossings.

As a result, the Val Verde Border Humanitarian Center was established. In 2021, it assisted 22,317 migrants. This March set a record for the center, with 5,028 migrants coming through.

In April, Gov. Greg Abbott of Texas, a Republican, started busing migrants to Washington, saying that he wanted to show President Biden what it was like to have them released by the hundreds into a community. Many of those buses have left from the Val Verde center. Gov. Doug Ducey of Arizona, also a Republican, recently joined Mr. Abbott in sending busloads of migrants to Washington.

At a shelter in Yuma, Ariz., Amanda Aguirre, president and chief executive of the Regional Center for Border Health, said she is in regular contact with the airport in Phoenix, which has complained about migrants arriving without plane tickets. When a bus leaves Yuma, she said, she lets the airport authority know when it will arrive, with how many migrants, and what languages they speak.

“It’s more coordination than anyone can even imagine that happens every day,” she said.

Communication among the disparate shelters has increased over the past year as the number of border crossings has risen, said Marielle Septién, who coordinates a border shelter network for Church World Service, a nonprofit resettlement agency.

Now, however, there is a growing need to also coordinate with cities around the country that migrants are traveling through and to.

Officials in Portland, Maine, where many African migrants have been arriving, recently announced that the city can no longer guarantee a place for migrants to stay. The city started sounding the alarm in October, when it was assisting migrant families of nearly 480 people. Earlier this month, that number was up to 1,200.

“Compassionate care for these individuals does not stop at the southern border,” Kristen Dow, Portland’s director of health and human services, said. “Compassionate care is seeing these individuals and families through to their destination cities and making sure that those destination cities have the services and access to the services that they need.”

In Washington, volunteers have been scrambling to meet the buses full of migrants being sent from Arizona and Texas. But last week, one volunteer said no more shelter beds were available, and little money was left to assist with transportation. The city has not provided help, and an application for federal funds has yet to be approved. Without such resources, the migrants could become homeless.

The release of hundreds of thousands of migrants into the country over the past year is not the result of a clearly defined immigration policy but is, in many cases, a consequence of the government’s inability to expel them for various reasons. And unless the outdated immigration laws are changed, the pattern will continue, many said, adding that as it is now, the shelters and respite centers need far more support than the FEMA grants provide.

“It’s a temporary solution. It should not be how we support organizations doing this,” said Marisa Limón Garza, the senior director for advocacy and programming at the Hope Border Institute, a human rights organization in El Paso. “It’s unsustainable.”

Tags
Center Sai̇d She Shelter That

‘The Last Generation’: The Disillusionment of Young Chinese

A.C.L.U. Apologizes for Tweet That Altered Quote by Justice Ginsburg

Trump Rally Underscores G.O.P. Tension Over How to Win in 2022

Jan. 6 Inquiry Subpoenas Giuliani and Legal Team That Made Claims of Voting Fraud