RINCÓN, P.R. — The turtle, presumably, had no way of knowing it would become a symbol of protest when it got stuck for hours in a construction site on a beach in western Puerto Rico, unable to return to the sea.

But the endangered hawksbill had wandered onto the site of a swimming pool being built so close to the ocean’s edge that a swimmer could practically step from the pool into the waves. A photo of the struggling turtle, its front flippers digging out of the sand, turned this summer into a symbol of defiance for Puerto Ricans alarmed at what is happening to their beloved coast.

Erosion and overdevelopment threaten Puerto Rico’s beautiful beaches. On an island that has struggled with bankruptcy, crumbling infrastructure and the emigration of a substantial part of its population, the pristine sand and abundant wildlife that have made Puerto Rico’s beaches famous around the world are both a point of pride and an important tourism draw.

Concerns over their future are decades old but have been exacerbated in recent years by climate change, hurricanes and a frenzy of building and rebuilding that is reshaping the island’s oceanfront. Gone, many Puerto Ricans fear, will be the last modest family homes and uncrowded stretches of habitat for hawksbill and leatherbacks. In their stead: luxury developments affordable mostly to rich people and outside investors lured by tax breaks.

Over the past 15 years, Puerto Ricans have endured debilitating hardships, from economic recession to hurricanes and earthquakes. To also see their treasured beaches disappear has only deepened their sense that it is the island’s very way of life that is slipping away.

Over the summer, and since, that trepidation manifested in the complicated saga of one pool in one condominium on one beach where a turtle came to nest — the story of how Puerto Rico’s bucolic past came to meet its paved present.

“Without that turtle, none of this would have happened,” said Miguel Canals Silander, the director of the University of Puerto Rico’s Center for Applied Ocean Science and Engineering, who lives not far from the beach.

Even before the hawksbill arrived in July to lay its eggs, conflict over the swimming pool at the Condominio Sol y Playa had brewed for weeks in Rincón, a touristy surf town with spectacular sunsets on Puerto Rico’s western tip.

The condo owners received permission to build it after Hurricane Maria destroyed the old pool in 2017. The new construction horrified some neighbors. Los Almendros Beach had narrowed, its sand lost to the hurricane and to rising seas. The pool and its surrounding wall would be closer to the ocean than before, resulting in less space for sea turtles, the tide and the public — on an island where protecting natural resources for community benefit is enshrined in the Constitution. 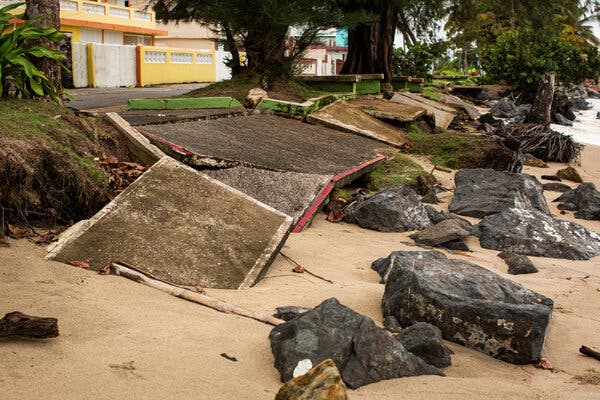 Severe erosion ruined a waterfront promenade nearly a decade ago and threatened homes and businesses in Loíza, P.R.

Los Almendros Beach has narrowed, its sand lost to a hurricane and to rising seas.

It would hardly be the only structure encroaching on the sand. Up and down the beach, hotels and homes damaged by the hurricane have been rebuilt right by the water, some of their decks and backyards acting now as sea walls. At high tide, stairs intended to provide beach access instead lead directly into the breaking ocean waves.

Nearby lie other reminders of Hurricane Maria’s wrath. In Córcega Beach, destroyed homes jut into the ocean, a jumble of cracked tiles and walls. A three-story condo building next door is slated for demolition. Farther south, an abandoned fishery tilts sideways off the sand.

The problem extends far beyond Rincón. In 2017, Puerto Rico found that about 60 percent of beaches had experienced erosion over the previous four years. Hurricane Maria caused more erosion along 35 percent of the coast, according to a 2020 study by the University of Puerto Rico.

“The time will come when the water line moves further inland and the beach will be lost completely,” said Maritza Barreto, the study’s lead researcher. “The government’s priority should be to adapt and protect what we have and not build new infrastructure in at-risk areas.”

Smaller towns worry that their plight will be overshadowed by Rincón and San Juan, the capital. The U.S. Army Corps of Engineers recently completed a long-awaited retention wall made of rocks along part of the shoreline in the eastern town of Loíza, where severe erosion ruined a waterfront promenade nearly a decade ago and threatened homes and businesses.

A fence at the Sol y Playa condominium complex.
Hotels and homes damaged by the hurricane have been rebuilt right by the water, some of their decks and backyards acting now as sea walls. In other cases, erosion has brought the ocean closer to existing structures.

Rincón lives off tourism, so protecting beaches is crucial to its survival. Many Americans from outside Puerto Rico have bought properties, enticed by a 2012 law that exempts them from most taxes on interest, dividends and capital gains. Given the island’s financial straits, the law’s backers contend that it helps attract necessary redevelopment dollars and other spending, even if just for a few months a year. Critics counter that such development is coming at the expense of environmental preservation.

Against that backdrop, Condominio Sol y Playa, a handsome four-story building with ample balconies, tried to rebuild its pool.

Not all unit owners approved. José G. Barea Fernández, an owner, filed a complaint in May with the Puerto Rico Department of Natural and Environmental Resources, which oversees public coastal areas, arguing that it had erred when it did not exercise its authority to stop a separate agency from granting construction permits.

Also in May, Eliezer Molina, an activist and former candidate for governor for the Puerto Rican Independence Party, recorded a Facebook Live video from outside the chain-link fence as construction was underway.

“These are your beaches,” he told viewers. “Soon, you’re not going to be able to use them if they keep allowing all these people to come and build.”

Hundreds of thousands watched. Protesters made their way to the beach. Police officers arrested Mr. Molina and several others. The condo association defended its plans.

Then, in early July, the hawksbill crawled under the construction fence, laid 166 eggs and could not get out until volunteers came to help. (The volunteers relocated the eggs, and some of them eventually hatched.)

Condominio Sol y Playa, a four-story building with ample balconies, tried to rebuild its pool.
A reminder of Hurricane Maria’s wrath in Rincón.

Tensions grew. Construction stopped. The fight went to court. Lawmakers held hearings. Other towns questioned if construction permits near their beaches had been properly issued.

The pool became a rare, tangible example of what poor planning and enforcement — at a time when accelerating climate change is causing higher seas and more intense hurricanes — look like, said Pedro M. Cardona Roig, an architect and former member of the Puerto Rico Planning Board.

“People have to see the impacts of what we’re talking about: a photo of a hawksbill in a construction site,” he said.

Mr. Cardona Roig argued that the pool was illegally built even in its original form, citing a 1997 memo from a land surveyor for the Department of Natural and Environmental Resources. The controversy swirling around the rebuild illustrates how officials failed for decades to enforce existing regulations — or write new ones — to protect public beach access and limit development in areas prone to storm surge, he said.

“The Sol y Playa pool was destroyed because it was built in that zone,” he said, “and the storm surge swept it away.”

A lawyer for the condo association declined to comment, citing the ongoing litigation. In past statements, the association has blamed a small group of politically motivated detractors for orchestrating protests that resulted in vandalism, threats and the invasion of residents’ privacy through the use of drones, loudspeakers and bright lights.

Remnants of a wall on the coast of Rincón.

“We have been the innocent victims of a brutal, selective persecution by people dedicated to destabilizing the democratic systems of law and order,” the association said in August, after the planning board found that the permits to rebuild the pool had been improperly granted. The board ordered construction to remain suspended until December.

In a statement, Rafael A. Machargo Maldonado, the secretary of the Department of Natural and Environmental Resources, maintained that the department had been “proactive” in the case and was working to enforce the law.

For now, the construction site sits mostly empty, an eyesore next to sunbathers. A nearby tent — “Camp Carey,” or hawksbill camp — stores coolers and other supplies for activists, though daily protests have ceased.

The hawksbill is thought to have come back twice to try to nest again, said Carlos Diez, the coordinator of the sea turtle conservation program in the Department of Natural and Environmental Resources. Once, volunteers saw tracks indicating that it ran into a half-built wall on the construction site and turned back without laying any eggs. The second time, it nested nearby.

On a recent morning, Carlos Rodríguez, one of the activists, walked by with his dog, Almendra, who is named after Los Almendros Beach. Protesters found her as a tiny puppy. Mr. Rodríguez, a fisherman, took her in.

Clad in a T-shirt with the colors of the Puerto Rican flag and a necklace with a turtle charm, Mr. Rodríguez, 63, recalled the pristine beach of his youth. He would pick fruit off trees that have long since been replaced by buildings.

Past the construction site, yellow tape demarcated an area in the brush. “Did you see?” he asked.

Stairs intended to provide beach access instead lead directly into the breaking ocean waves at a hotel in Rincón.

In a Region in Strife, India’s Moral High Ground Erodes

This Is Where the States Want Billions in Infrastructure Funding Spent

How Public Preschool Can Help, and How to Make Sure It Doesn’t Hurt