Last month, I wrote about Randi Weingarten, president of the American Federation of Teachers. I argued that while many people blamed her for school closures, she’d actually labored to keep schools open. A common criticism of the article was that Weingarten was just trying, with my help, to salvage her reputation as evidence of the harms of interrupted schooling mounted.

The Republican senator Tom Cotton tweeted that Weingarten was on a “rehabilitation tour.” Fox News’ website ran a story headlined, “New York Times column blasted for portraying Randi Weingarten as champion of keeping schools open.” This month, when some schools closed in response to Omicron and the Chicago Teachers Union staged a walkout, one open schools advocate tweeted sarcastically that my Weingarten piece “has aged beautifully, I think we can all agree.”

Maybe I’m just defensive, but I think it’s aged OK. It seems clear to me, as I’ve watched how public schools are responding to Omicron, that Weingarten, along with some other union leaders, are trying to avoid shutdowns, even at the risk of infuriating some of their members. The vast majority of the country’s schools, after all, are open, even though there’s probably a better case for shutting down now than there has been at any point since the spring of 2020. Where schools have closed, it’s mostly been for logistical reasons — there are simply too many staffers out sick.

Chicago, Weingarten insists, is an anomaly. The city “looms very large, as it always does, but it is one district in which there was a teacher-union-called job action,” she said. “There are plenty of places where teachers are concerned and where there’s groups within school districts that are calling for sickouts. But in terms of my union, there’s no organized effort to do that. In fact it’s quite the opposite.”

A number of teachers aren’t happy about this; some feel unsafe in classrooms and abandoned by their leadership. On Monday evening, a left-wing caucus of the United Federation of Teachers, the New York City union that Weingarten once headed, was planning to protest outside union headquarters to demand, among other things, that schools go remote until Jan. 18.

Weingarten, who recently had Covid herself, sees the anxiety among her members. If you asked them, she said, whether they’d like to “be remote for a few days as this passed,” she thinks “overwhelmingly they would say yes.”

So why won’t she demand remote school on their behalf? “Kids, our society, our communities need very much to do whatever we can to create normalcy,” she said, adding, “Whether it’s kids learning, whether it’s isolation issues, whether it’s the economy,” too much depends on functioning schools.

My guess is that if we hadn’t had extended school closures last year, there might be more appetite for a brief closure now, especially given hope that Omicron could soon peak. After all, most schools may be open, but illness is making it hard for many to function.

The education website Chalkbeat reported on disruptions in New York City, including a high school in Brooklyn where hundreds of students had to sit in the auditorium because around 50 teachers were out sick and there’s a substitute shortage. In Miami, The Washington Post reported, coaches and administrative staff have filled in for absent teachers. While there are lots of parents who adamantly oppose school closures, others are afraid to send their kids to class: In Rochester, N.Y., last Monday, 40 percent of students were absent.

Yet given how damaging last year’s shutdowns were — to learning, to mental health and to the future of public education itself — there’s enormous resistance to returning to virtual classes. Democrats fear it would stoke political backlash. And a vocal group of parents won’t stand for it, because they don’t trust that short-term closures wouldn’t drag on indefinitely.

There will be more closures over the coming weeks, but, outside of Chicago, Weingarten thinks, they will mostly affect individual schools. She analogizes the situation to that of the airline industry. Flights are being canceled when there are not enough people to staff them, not because of disputes over whether it’s safe to fly at all.

“Assume for a second there was not this toxic environment,” said Weingarten. “I think what you’d actually see is a lot of people feeling pretty good that schools are being opened, and that the communities are coming together to do what we used to say we should do, which is: schools should be first priority.”

This is the hardest situation that she’s ever faced as a union leader, Weingarten told me. Lots of teachers are frightened and exhausted. The story, for now, is that most of those who can are still showing up.

Tags
School She That This Union

Crusading for God, Family and … Bitcoin?

80 Years Ago the Nazis Planned the ‘Final Solution.’ It Took 90 Minutes. 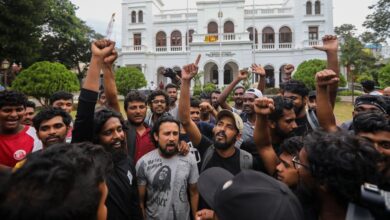 Sri Lanka Collapsed First, but It Won’t Be the Last

The Dystopian Myths of Red America

After a Plague, a Labor Reckoning